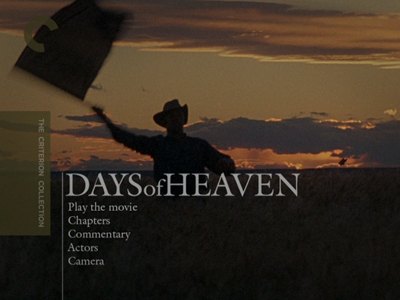 There are few films as special as Days of Heaven, and that's because there are even fewer directors with the kind of persistence of vision possessed by Terrence Malick. To watch Days of Heaven is to be enveloped in an entirely different world, to lose yourself completely in the sights and the sounds of a dreamlike state, transported back in time or to another dimension altogether. Through Malick's eye for the poetic detail in every nook and cranny of the natural environment he shoots in, we move past the layers of drama that bury other films in the manners of convention and drift into something more natural, something filled to the brim with heartache and desire.

Days of Heaven has been on DVD before. It was released in 2000 (and then re-released with a different cover in 2006) and received particularly high marks for sound and video (DVD Talk's original review). Despite a paucity of extras, it was felt that the film had been treated right. What a difference seven years can make, particularly in the fast-paced field of technology. And what a difference in getting the director and members of his original crew involved in the DVD mastering. The new Days of Heaven - Criterion Collection release is a real eye-opener in terms of how subtle an art film restoration can be.

From a story standpoint, Days of Heaven can actually seem relatively slim. Set in the Depression era, it follows three drifters: Bill (Richard Gere), his sister Linda (Linda Manz), and his girlfriend Abby (Brooke Adams). After Bill gets into hot water in Chicago, they flee to Texas and find seasonal work on a wheat field ready for harvest. As a cover story, they say they are all three siblings, meaning the lonely owner of the field (Sam Shepard) is unaware that the woman he becomes smitten with isn't everything she claims. Overhearing that the farmer has only a year to live and knowing he has no family, Bill persuades Abby to accept his advances so that they all three can inherit the ailing man's fortunes. Life on a rich farm has a certain idyllic allure, but eventually someone is going to get wise to the con, and that will be the young people's undoing.

Ostensibly, Days of Heaven is a potboiler, but writer/director Malick keeps that pot at a cool simmer. Despite the incongruity of the film's rather short 94-minute running length and the lazy pacing of the film, Malick and editor Billy Weber manage to make a lot happen in Days of Heaven. We don't get the standard background stories and collection of quirks that often passes for personality in Hollywood, and yet anyone viewing Days of Heaven will feel he knows all the characters intimately by the end. Their enigmas define them the way personal mysteries define everyone. What they choose to show plays against what is absent, and gesture and action convey more than any soul-bearing soliloquy. 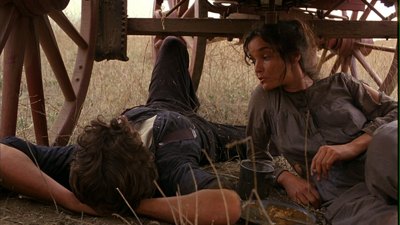 The pictures on the screen are as much of a character in a Terence Malick picture as any of the actual people. A pheasant hiding in the wheat is as important as the wheat being torn down. For Malick, life is about pausing and soaking it all in, marinating your thoughts in the sights that are all around you. In this endeavor, the director is assisted by two amazing cinematographers: Nestor Almendros, who had worked with Rohmer and Truffaut, and the legendary Haskell Wexler, the director of Medium Cool and the lensman on countless motion pictures. Much is made of how this film was shot entirely at magic hour, that brief moment of time when the sun is going down and everything is bathed in a blonde glow. While the film does have that look throughout, as you will learn in the commentary on this disc, the reality of how it is shot is much different. Malick understands how to use natural light to his advantage to achieve the beauty he sees in his head.

Advance word about the Days of Heaven - Criterion Collection edition was that it would look vastly different than the golden movie cinephiles have grown accustomed to. Reportedly, when Malick, Webber, and camera operator John Bailey joined the mastering process, they were adamant that gorgeous was secondary to natural. Their intention in shooting the picture (with Calgary standing in for Texas) was to capture the landscape as it was, to let its organic lushness speak for itself without any aid of moviemaking trickery.

The change in the picture for this DVD is drastic, but not in a shocking way. To be honest, unless you know Days of Heaven backward and forward, you may not even really see how different it is right away. Every frame of this film is still stunning to look at, and your breath will be taken away. It's not until you stop and really look that you see how much prettier the new transfer is by not trying so hard to be pretty. It's like a girl who always wore just a little too much make-up. When she removes some of the war paint, you discover how little was actually needed.

I picked two different moments to compare in my screen captures. The first is the shot of the scarecrow at dusk we see when we first get to the farm. You'll see right away in the first picture that the image is pretty orange.

In the new version below, the orange remains, but it has more variation, giving us a little more detail in the clouds. What is more noticeable is the stronger blues in the surrounding sky. 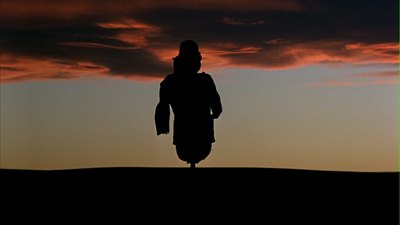 The second scene is a little bit later in the film, with Richard Gere and Brooke Adams out at the river. It's a more open space, more light, closer to daytime than evening. 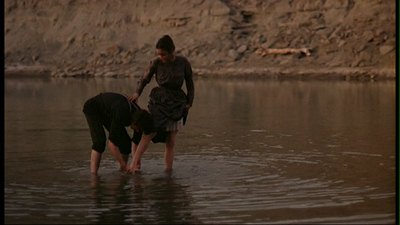 There are more browns and beiges in this scene than bright, bright colors, and I think that makes it interesting to look at. In the above picture, look at the background of the slope and the rocks. It's got detail, but the color is pretty much showing up as a single note, whereas in the image below, there are more variations to the brown and more specific details of the rocks and dirt are now visible. 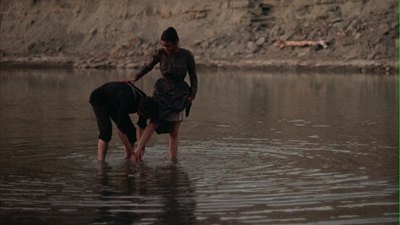 Look, too, and you will see more contrast between their outfits.

I'm sure there will still be some argument over which version people prefer, with some siding on the older prints of Days of Heaven purely for the sake of nostalgia. (I understand this. I actually am partial to the old cut of Touch of Evil I saw a million times before its restoration several years ago.) Yet, there is no denying the quality of the overhaul Criterion has done here and their commitment to working with the people who actually made the movie to honor their intentions above all others.

Video:
The image on Days of Heaven - Criterion Collection is shown at a 1.78:1 aspect ratio, anamorphic widescreen. In addition to the changes in the color timing, the technicians have taken a scrub brush to every frame. This DVD is spotless, free and clear of any flaws, dirt, or scratches.

Sound:
The 5.1 Dolby Digital audio track is just as clean as the video image. The sound comes through crystal clear, capturing the full range of sequences from the overly loud factory in the opening scenes to the quiet and solitude of the open field.

Extras:
Criterion cobbles together two new audio tracks for one commentary featuring various participants from the crew of Days of Heaven. Editor Billy Weber, art director Jack Fisk, and costume designer Patricia Norris chat together about the challenges of the movie and the dedication Malick inspires. Separately, casting director Dianne Crittenden explains how the different actors were found for the movie. The commentary is really good, full of anecdotes about how the things we see on screen came together, busting a few myths about the production, and shedding some light on the mysterious director, as all of these people have worked with him on more than one of his films.

The rest of the extras are all interviews, including a new audio conversation with Richard Gere, new video interviews with Haskell Wexler (11 minutes and 30 seconds) and John Bailey (20:25), and a 2002 sitdown with Sam Shepard (12:30). Gere's interview is just under twenty-two minutes, and it runs with still images and clips from the movie, sometimes cut to fit the specific scene he is talking about. Shepard approaches the production from the point-of-view of being a writer himself, and naturally Wexler and Bailey tackle more technical matters, with Bailey leaning more to the early shooting with Nestor Almendros while Wexler gives us his take on how things got done. Bailey also discusses how odd Days of Heaven was in terms of the maverick trends of 1970s filmmaking and how it fits with Malick's later work.

A 40-page accompanying booklet is packed with photographs and features a critical essay by film scholar Adrian Martin and an excerpt from the autobiography of cinematographer Nestor Almendros.

FINAL THOUGHTS:
Terence Malick's films are among those I consider my most beloved, and his second is believed by many to be his best. Though available on disc previously, the Days of Heaven - Criterion Collection DVD seriously improves on the old versions, offering a new transfer that gets us closer than ever to the director's intentions and a handful of supplementary features that open up the books on this fabled production. A dreamy story of mixed-up lovers on the run, a rumination on nature, a Biblical smackdown in Depression-era Texas, Days of Heaven is a lot of movie in one compact package. You can watch it for the story, or you can sit back and just stare at how pretty it is, or if you have the time, watch it once the first way, once the second, and then watch it again. Days of Heaven - Criterion Collection could not be more Highly Recommended. 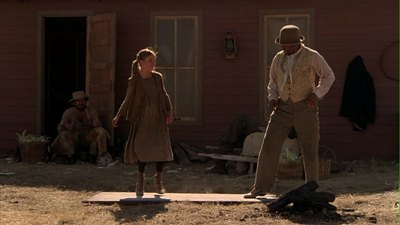