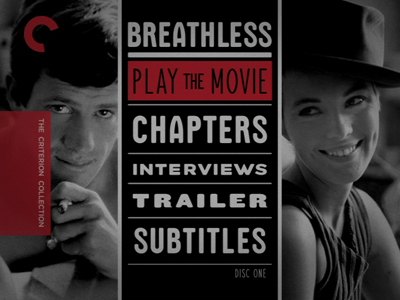 Upon its release in 1960, Jean-Luc Godard's Breathless (À bout de soufflé) was like an explosion of cinematic ideas. Having set fire to the standards of film criticism in the fabled journal Cahiers du cinema, Godard and his cohorts were ready to walk it like they talked it. Working from an idea by Francois Truffaut, and featuring Claude Chabrol as "technical advisor" (pretty much a fake credit), the film was ground zero for what would be called the French New Wave (or Nouvelle Vague), a movement that would renounce uptight, stale conventions in search of a new, modern voice.

As with many great auteurs of modern movies, Godard began his career by working in the genres that inspired him. Breathless is a gangster picture with the crusts sawed off. Jean-Paul Belmondo plays Michel Poiccard, a low-level tough guy with delusions of Bogart. He makes claims of having been in the army, and we're told that he once was a flight attendant, but now he's a thug, making faces at himself in the mirror to get his expressions just right. Michel and one of his girlfriends, Liliane (Liliane David), want to be in the movies, but it's so much work. Better to just pretend you are the thing you imagine you are.

Michel's decisive transformative moment comes at the start of the picture. On a joyride in a big American car, he gets chased by a pair of motorcycle cops and ends up shooting one of them. Now a murderer, he heads back into Paris to try to score cash that is owed to him and one more roll in the hay with Patricia (Jean Seberg), a cute American with a pixie haircut. She's got a surprise of her own for Michel, one that could complicate things if he ever stopped trying to get in her pants long enough to think about it. Michel wants her to be a typical gangster moll who lies to the cops and acts as his accessory in whatever crime he's got going, but Patricia isn't sure she's going to be able to postpone growing up long enough to keep playing Michel's bad boy games. Is it perhaps a none-too-subtle nod to Godard's journalistic roots that Patricia aspires to be a reporter, and it's she who will see the dead-end in Michel's overdone ideas? 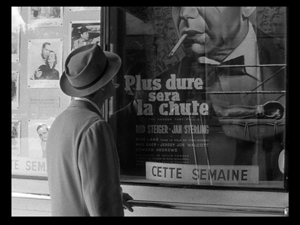 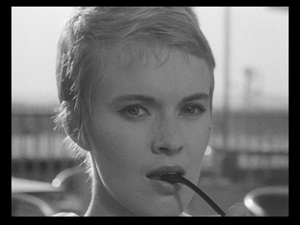 Though the plot mechanics of Breathless are as old as Scarface--one of the many touchstone films mentioned in Godard's irreverent trailer for the movie, and George Raft's quarter-flipping is likely the inspiration for Belmondo's tic-like ritual of rubbing his lips--but the upstart director busts all of the boundaries off the genre and flaunts the rules of moviemaking to boot. His freeform, freewheeling plot doesn't settle for point A to point B conflict-resolution simplicity. At times, he steps away from the plot altogether, with one of the longest sequences being an extended conversation in Patricia's room with no mention of the bounty on Michel's head being made at all. Then again, most noir antiheroes get themselves screwed up through jealousy and not being able to let go of that one particular girl. In that sense, Michel is no different than the sappy Burt Lancaster of Criss Cross or the sadistic Lawrence Tierney of Born to Kill. If it's not the money, it's the dames.

That leaves attitude as the biggest difference between Breathless and the American gangster pictures Godard emulates. Attitude, and size. Like American cars, American movies are bigger. They are also heavier. Burt Lancaster, be it in Criss Cross or The Killers, was never able to shake off the inevitability of fate. His doom weighed on him. Jean-Paul Belmondo never seems to suffer at all. If he breaks a sweat, it's only in the rarest of scrapes. Belmondo is a manly presence, reeking of musk and lumbering forward with a jungle cat's swagger. He's also kind of ridiculous, completely obsessed with getting laid and with how he looks. No wonder he declares he's tired in the end, it's a lot of work keeping up such appearances.

Still, Godard and his cinematographer Raoul Coutard give Belmondo a big playground to show off in--all of Paris itself! Breathless is shot on the street, seemingly on the fly with the sidewalk gawkers left in for posterity, and then edited with a persistent wink, jumping between takes and comically juxtaposing image and sound. A lot of Breathless feels like it was made up as it goes along (once again putting aside the noirish air of inescapable destruction), like a couple of guys grabbed some cameras and some toy guns and went running around shooting stuff until they had a movie. True or no, it's kept Breathless feeling healthy and alive for nearly fifty years, crystallizing a spirit of freedom that many are still trying to crack open and use.

Yet, there will never be another like Breathless. Though many of the Godard films in the coming years are even looser and more playful, the first time always has something special. There would be no repeating the Belmondo and Seberg chemistry, no better illustration of the oft-repeated "a girl and a gun" formula, and no putting the lid back on after the seal was broken.

Video:
This new two-disc edition of Breathless from Criterion is not the first time the movie has been released on DVD in North America. The old Fox Lorber version from seven years ago is so inferior to this one, it's barely even worth mentioning. Criterion has enlisted Raoul Coutard to supervise their disc, and the new transfer is super clean and nicely rendered, with good contrasts between light and dark. The 1.33:1 fullscreen aspect ratio image has been pictureboxed (or windowboxed, depending on the phrase you choose) to overcompensate for different monitor sizes, but whether or not you see this as a problem is up to you (it essentially means black lines on all four sides of the frame when viewed on widescreen TVs).

For those who like such things, here is a comparison of the two DVDs, using the classic New York Herald Tribute scene from early in Breathless. 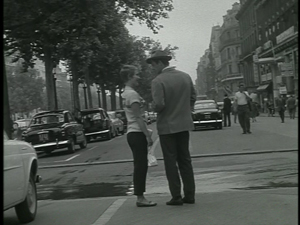 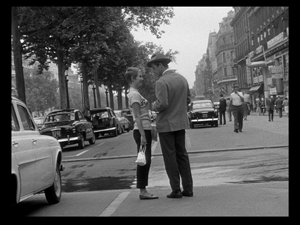 The better quality tinting and the crispness of the image are both immediately evident. This new transfer is head and shoulders above the old one.

Sound:
The Breathless - Criterion Collection set keeps the original French soundtrack, cleaned up in mono to preserve the original sound quality. It's a clean job, free of hiss or extraneous noise, with good volume applied to Godard's trademark audio jokes. The removable English subtitles are nicely written and move at a readable pace.

Extras:
The two-disc collection loads up Godard fans with a bunch of extras. Most of them are on DVD 2, but DVD 1 has several period interviews with Godard, Belmondo, Seberg, and director Jean-Pierre Melville, who has a cameo in Breathless as the pretentious author Parvulesco. In total, these run for 27 minutes. Additionally, we get the original French trailer, which Godard aficionados will know is an essential on his discs, as his trailers almost always break from regular conventions.

DVD 2 is the full supplemental disc, and it comes with quite a few exceptional selections:

* Contemporary interviews with Raoul Coutard and assistant director Pierre Rissient (22 minutes, 24 seconds): Two separate interviews woven together of both gentleman reminiscing about Godard and the making of Breahtless.
* Interview with D.A. Pennebaker (10:30): The influential documentarian (Bob Dylan: Don't Look Back, Depeche Mode 101) relates his experience meeting Godard and explores his assertion that Breathless was "a documentary about Jean-Paul Belmondo and Jean Seberg."
* Jean Seberg film essay (18:20): A new biographical study of the actress by Mark Rappaport, director of the documentary From the Journals of Jean Seberg. He uses still photos and clips from promotional films and interviews to chronicle the various cresting waves of her tragic life and career.
* Breathless as Criticism (11:05): Another film essay. Jonathan Rosenbaum compiles clips and explains the various cultural, literary, artistic, and cinematic references Godard makes in Breathless. (A similar extra did the same thing for the Band of Outsiders package Criterion put out, which actually serves as kind of a road map for how this set was put together.)
* Chambre 12, Hotel de Suede (1 hour, 18 minutes): An early '90s French television program that seeks out the original locations from Breathless, as well as finding cast and crew, in order to get as close to the flashpoint that was the film as possible, sort of like peering back through time and space at the Big Bang. Those interviewed include Belmondo, Claude Chabrol, Coutard, and many others. Godard even shows up, ever so briefly, as a voice on the phone. He hangs up on the interviewer almost immediately.
* Charlotte et son Jules (12:35): A fun short from 1959, which paired Godard and Belmondo for the first time and shows a few hints of what was to come.

Breathless - Criterion Collection's DVDs are held in individual plastic trays inside a gatefold cardboard box. This box also has an outer slipcase, and the whole package has an excellent symmetry of design that imitates the playfulness and formalism of Godard's film. Nestled inside with the discs is an 80-page book full of photos and essays, including a piece collecting pertinent conversations with Godard from between 1959 and 1962 and the first two treatments for Breathless by Truffaut and Godard.

FINAL THOUGHTS:
Having signaled an important sea change in world cinema in 1960, it's been a shame that Jean-Luc Godard's energetic debut has taken so long to get the prestige DVD treatment. The Breathless - Criterion Collection two-disc set rectifies that, restoring the film in a pristine print, balancing it out with smart and informative extras, and putting the whole thing in a sharply designed box. Breathless is a product of youthful energy, of a director possessed of an enormous self-belief and everything to prove, and that energy rings out like a gunshot in this iconic film. Jean-Paul Belmondo is a feral tough guy, restless and full of desire, while Jean Seberg is an enigma that still haunts our collective unconsciousness in a whole new century. Not my favorite Godard, but certainly one of his most entertaining and easily his most enduring. Highly Recommended. 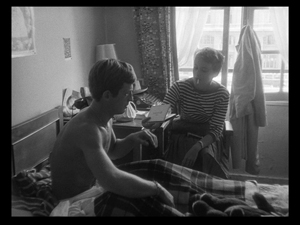 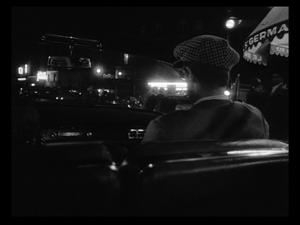