In lesser hands, a biopic of filmmaker, hotel magnate, and aviation pioneer Howard Hughes could have been a mediocre event that probably would have come and gone from the local multiplex with hardly any notice.  Martin Scorsese was at the helm however in 2004 when The Aviator was released, and it is anything but average.  A beautiful and technically masterful film, the nearly three hour long biography seems to fly by.  The movie went on to win 5 Academy Awards, (though Scorsese himself was snubbed) and still play just as well today as it did then.  Warners has just released the film on Blu-ray with an impeccable transfer and a full compliment of bonus features which makes this a great disc to add to a high definition collection. 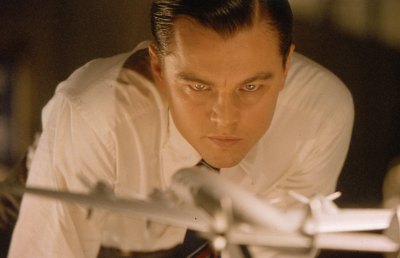 Focusing on two decades of the man's life, the film paints the tragic story of Howard Hughes (Leonardo DiCaprio), a man with a brilliant mind and boundless energy who also suffered from debilitating Obsessive Compulsive Disorder (OCD).  The narrative starts in the 1920's while Hughes was working on the filming of Hell's Angels.  As much a perfectionist as he is stubborn, Hughes refuses to compromise at all on the filming of his epic.  He does countless takes and spends enormous amounts of money.  When sound films become the rage, he famously reshoots the whole movie in sound and then spends months and months editing it.

Hughes is first and foremost an aviation buff.  He loves planes; flying, building and designing them, and when TWA baulks at buying a new plane that Howard wants to build, he buys the company telling an executive "We don't want a bunch of pencil-pushers gettin' in the way of us makin' our plane now do we?" 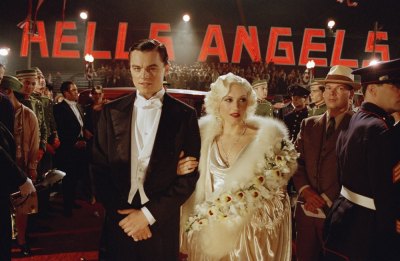 Rich, young, and unmarried, Hughes is also known as a famous playboy, dating all of the stars in Hollywood.  He ends up having a lasting relationship with both Katherine Hepburn (Cate Blanchett), and later a platonic affair with Ava Gardner (Kate Beckinsale).  He seems to have everything a man could want, but behind the public persona is a tortured man.  Suffering from OCD, Hughes spends weeks and months alone in his room, issuing strict and complicated orders to his staff dictating exactly how his food is to be prepared and bought to him.  Filled with phobias, especially against germs, Hughes seems unable to function anymore.  That is until Pan Am Airlines manages to push a measure through Congress that will virtually put TWA out of business.  Then Hughes has to rise to the occasion and appear before Congress to testify, and not only look sane, but savvy.

Scorsese has filmed many great films, and this is one of his finest.  Every aspect of the production is impeccable, from the way it was filmed to simulate the early Technicolor process of the 1920's and later the more advanced three strip process, to the set designs and the special effects this is one well made film. 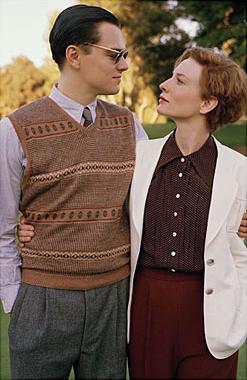 The acting is spectacular.  Leonardo DiCaprio, who prior to this movie I always thought of as a pretty-boy with only a minimum amount of talent really shines in the role.  He comes to embody all of the contradictions that went to make up the real Hughes, and does so quite believably.  When Howard starts repeating a single sentence fragment over and over, he doesn't come across as a broken record but a man struggling to stop something that's out of his control.  He's equally realistic playing Hughes in a night club with a starlet on his arm or locked in his room unwashed and in the depths of madness.

The rest of the cast does an equally wonderful job.  Kate Beckinsale is very good as Ava Gardner, but Cate Blanchett steals every scene she's in as Katherine Hepburn.  It would have been so easy to flub the role, but Blanchett has all of Hepburn's mannerisms and traits down beautifully and it's sometimes hard to remember that she isn't the star of Hollywood's golden age.

The film's success has as much to do with what it doesn't try to do as with what it does attempt.  Wisely, Scorsese avoids trying to explain many of Hughes contradictions.  He doesn't delve into the man's psyche to reveal the ultimate reason he suffered from sever OCD.  He just portrays the man how he was and leaves the neat and tidy explanations for someone else, and the movie is stronger for it.  Any such clarification would be just supposition and come across as fake and contrived.  The closest they come is the unanswered (and largely unasked) question:  how much of Howard Hughes' success was due to his OCD and how much was in spite of it. 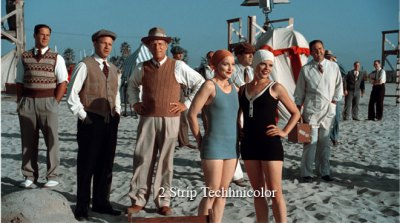 The VC-1/1080p encoded 2.4:1 image looks excellent, reproducing the stylized look that Scorsese was going for impeccably.  To create the feel of 1920's and 30's Hollywood, the first part of the movie was filmed on a way to make it look like a two strip Technicolor production.  Because of this stylistic choice, the color has the warm look of a painting, rather than the realistic look of a photograph.  Flesh tones look most natural though a little on the orange side, but the sky is more cyan than deep blue.   In order to further increase the two strip Technicolor look, this portion of the film is also a bit softer than the rest of the film.  (This particular Technicolor process involved gluing two half width strips of developed film together.  Since the frames were laid on top of each other (and therefore they weren't in the same plane) the resulting image was softer than black and white films of the time.)

Once the time line hits the mid 30's when three strip Technicolor was available, the film becomes dazzlingly colorful.  The greens and blues just leap off the screen and the image is razor sharp.  This change is rather abrupt, and it's a little shocking, like when Dorothy lands in Oz in the Wizard of Oz.  Both styles are look wonderful on this disc, with deep, rich blacks and well saturated colors.  Posterization, aliasing, and other common digital defects are not present.

It's a little disappointing to note that there isn't a lossless audio track on this disc, only a DD 5.1 in English (as well as a 5.1 French track and a stereo Spanish mix.)  The film itself is mainly dialog based and the audio is firmly centered on the screen.  There is a fair amount of use of the front soundstage with several discrete audio effects, but the rears were underutilized.  They really came to life during the plane crash, which was very effective and impressive, but aside from that they were used sparsely.  The audio sounds wonderful though, with deep bass, crystal clear highs and warm mid-tones.

Warner Brothers was nice enough to port over all of the bonus material from the 2-disc SE DVD.  Only the trailer is in HD, but with so many high def discs omitting extras found on the SD counterparts, I'm not going to complain to loudly.  This is an excellent collection of material, and nearly all of it is very good.

First up is a commentary track by director Martin Scorsese, editor Thelma Schoonmaker, and producer Michael Mann.  Though each of these people were recorded separately, the track is excellent.  Scorsese is a very entertaining commentator and offers insights on not only the movie, but Hughes and America at the time.  Even with the film running nearly 3 hours, this track never gets boring or dull, which is saying a lot.  Even if you're not a fan of commentaries, check this one out.

There's a nice minute and a half deleted scene where Howard tells Ava about his car accident that would have fit well into the film.  Not sure why it was cut.  A Life Without Limits: The Making of The Aviator is an 11-minute hug-fest where the cast and crew talk about how wonderful everything is.  I'm pretty tired of these and could have lived without it.

The Role of Howard Hughes in Aviation History runs nearly 15 minutes and has aviation scholars, Hughes biographers, and pilots as well as Leonardo DiCaprio and Martin Scorsese discussing the advances in flight that Hughes championed.  Though a lot of this information is covered in the movie, this nice short gives some nice perspective on just what Hughes did.

One of the most interesting bonus features is a History Channel documentary; Modern Marvels: Howard Hughes.  This 42-minute episode is very informative and engrossing.  It covers not only the advances that Hughes helped to bring about in aviation but also discussed the Obsessive Compulsive Disorder (OCD) that he suffered from, which, as the movie shows, was often totally disabling.

The Affliction of Howard Hughes: Obsessive Compulsive Disorder is a 14-minute look at this disease the hampered Hughes so much.  Two Hughes biographers as well as doctors and other people who suffer from the disease discuss the malady and how it affects people.  This is followed by a 15-minute panel discussion filmed at UCLA with Leonardo DiCaprio, Martin Scorsese and Howard Hughes' Widow Terry Moore.  They discuss how DiCaprio replicated Hughes exact tics and foibles.  It's a very interesting companion to the film.

The 28-minute An Evening with Leonardo DiCaprio and Alan Alda is a typical Q&A session and repeats a lot of the information given elsewhere, but it's still a nice inclusion.  Though it gets dry at times, it never feels like a waste of time.

Then there are a veritable slew of short featurettes covering many aspects of the production featuring the people who did the actual work:  The Visual Effects of The Aviator, Constructing The Aviator, Costuming and Scoring The Aviator, and The Aviator and the Age of Glamour.  These run from 3-12 minutes in length and do a good job of illustrating the techniques used to bring the movie to the screen.

The Wainwright Family - Loudon, Rufus and Martha is a five minute look at how this family played lounge singers from the 20's, 30's and 40's.

One of Scorsese's better films (and that's saying a lot), The Aviator is a compelling and interesting look at a man who has everything, and yet is haunted by his own uncontrollable compulsions.  With impeccable acting all around and an excellent technical quality, the film is a joy to watch.  This Blu-ray disc has a wonderful image and some great bonus features too.  This is a disc worth owning.  Highly Recommended.