Severin // Unrated // October 30, 2007
List Price: $29.95 [Buy now and save at Amazon]
Review by Stuart Galbraith IV | posted November 14, 2007 | E-mail the Author
Prior to becoming best-known for splatter movies like Zombie 2 (1979)and The Beyond (E tu vivrai nel terrore - L'aldila, 1981), Italian director Lucio Fulci dabbled in a wide range of flavor-of-the-month genres - spaghetti Westerns, giallo, sex comedies, spy films - the kinds of movies Italian filmmakers busied themselves with during the 1960s and '70s. Though his later work has developed its own cult following, Fulci's earlier films, especially A Lizard in a Woman's Skin (Una Lucertola con la pelle di donna, 1971), Don't Torture a Duckling (Non si sevizia un paperino, 1972), and the offbeat Western The Four of the Apocalypse (I quattro dell'apocalise, 1975) are more interesting and better-directed. Many regard Fulci's supernatural giallo The Psychic (Sette note in nero, or "Seven Notes in Black") as his best work. Though it breaks no new ground, it's a very effective little thriller, smartly directed and engrossing, and it delivers some good shocks and considerable suspense. 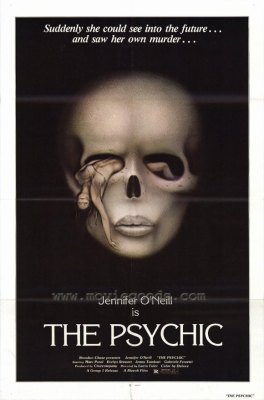 The film gets off to a creepy start. In 1959, presumably from the top of the White Cliffs of Dover, a woman (Elizabeth Turner) leaps to her death. Simultaneously in Florence, Italy, her young daughter, Virginia (Fausta Avelli), has a vision of her mother's suicide. Years later, in present-day Italy, the now-adult Virgina (Summer of '42's Jennifer O'Neill) is newly married to wealthy businessman Francesco Ducci (Gianni Garko). After seeing him off on a business trip, Virginia is driving through a series of long, dark tunnels when she experiences more psychic visions: something to do with the murder of an old woman, an upturned statue revealing a letter, a plaster wall that has been torn apart, a strange, limping man, etc. She blacks out.

Later, she arrives at an old abandoned mansion (described in the dialogue as a "farm house"), property owned by her husband that decorator Virginia hopes to restore. However, the furniture in one of the rooms resembles that from her recent vision, and after noting a fine line of plasterwork done to one of the walls she's compelled to use a small pick axe on it, obsessed with what lies behind it. What she finds is a skeleton, which she assumes is that of the old woman she saw murdered in her vision. Of course, such supernatural powers don't sit well with the police; they doubt her story and soon enough charge husband Francesco with murder.

It turns out that the skeleton is the body not of an old woman, but rather a young woman in her twenties, and forensic science determines that the murder took place sometime in the spring of 1972. Trying to clear her husband's name and confused by the conflicting images in her vision, Virginia consults with friend Luca Fattori (Marc Porel), a specialist in psychic research. Eventually, their investigation leads Virginia to a mysterious wealthy man, Emilio Rospini (Gabriele Ferzetti, of Once Upon a Time in the West and On Her Majesty's Secret Service).

For fans of giallo familiar with its conventions, The Psychic offers few surprises but palpable suspense. (Spoilers) Though it's obvious to the audience but not immediately apparent to Virginia, her visions of murder and intrigue are actually visions of future events, and that's really the film's only semi-unexpected twist. Early on she pegs Emilio as the murder, so early in fact that fans of the genre will quickly write him off as a red herring; Ferzetti, despite his second-billing status, is barely in the film, not more than ten of its 97-minute running time. (The picture is uncut, reportedly for the first time in America. The original R-rated release was 5-7 minutes shorter and released theatrically by Group I International.)

Nevertheless, the film treads this-worn path with style and suspense. Fulci throws his creative energy into the film's big set pieces, such as Emilio's stalking of Virginia at a church late at night, and the film's climax, lifted from Edgar Allan Poe (directly adapted by Fulci in 1981's Black Cat), is genuinely harrowing. O'Neill is fine as Virginia, and the other performances, as well as the Bixio-Frizzi-Tempera score, are all above average.

The DVD screened for this review was not final product but a DVD-R. The 16:9 enhanced 1.78:1 presentation approximates its original 1.85:1 release. The image is quite good, though like a lot of Italian films from the era the colors are a little bland and the image a tad soft. Generally though, it looks just fine. The audio, on the other hand, is problematic. Presented in English only (though the titles are in Italian, subtitled in English), the 2.0 Dolby Digital mono requires extreme amplification to be heard (I had to turn the volume on my set to about 5% from the top), and even then the sound is rather weak. The synchronization of the dubbing is frequently a beat or two off, though that seems inherent to the original dubbing job rather than the transfer.

Extra Features or: Suppose They Made a Featurette and Nobody Came?

The main supplement is one of the strangest extras this reviewer has ever encountered. Voices from the Black is billed as a "featurette with co-writer Dardano Sacchetti, costume designer Massimo Lentini, [and] editor Bruno Micheli." That's technically true, but what the cover text doesn't mention is that none of these people actually appear in the 27-minute/16:9 enhanced documentary - everyone has been interviewed by telephone, their Italian translated via English subtitles. Their voices appear over clips from the movie and there are only a few stills. The visual effect is bizarre: disembodied voices over (at times) randomly chosen highlights from the movie. Because we never see the interviewees, this odd juxtaposition forces the viewer to concentrate on the subtitles (and other text identifying who's talking) anyway, the entire exercise is rather pointless. A much better idea would have been to simply use this material as either a booklet insert, or as a text only extra on the DVD. As it is now, you're likely to get a headache trying to read the subtitles while following the images. The conversations are interesting however, though Fulci himself doesn't come off well. Sacchetti basically calls him an arrogant, unoriginal crook.

Not mentioned on the box but also included is an American trailer for the film, also 16:9 enhanced. Curiously, it makes no mention of the releasing company.

The Psychic is much better than most likely will expect it to be. It's not for everyone, though giallo fans will find it a pleasant surprise. Recommended.