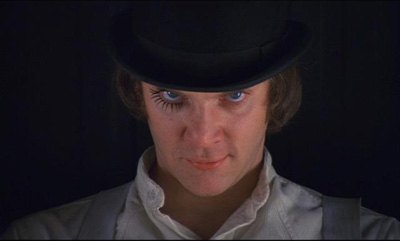 With 2001: A Space Odyssey, Stanley Kubrick proved he could be more than just a brilliant filmmaker; he could fill the seats and generate profit. This enhanced credibility allowed him to turn an obsessed eye towards Napoleon Bonaparte, a man Kubrick found eminently fascinating and an historic figure he felt would be perfect for an epic blockbuster the likes of which no one had ever seen. Sadly, years of detailed research and creative budgeting were wasted as the winds changed in the front offices of MGM, and Kubrick's support for the project disappeared. There was a silver lining to this unfortunate loss, however, and that came in the form of a new studio, Warner Bros., with whom the director subsequently formed a partnership that would endure throughout the rest of his life. Illustrating great confidence in their newly acquired genius, Warner immediately locked up Kubrick for three pictures and gave him the artistic freedom he required to create one of the most controversial films ever made: A Clockwork Orange.

Based on Anthony Burgess's decidedly unique novel, Stanley Kubrick's A Clockwork Orange makes its intentions known immediately, establishing that perfect connection between sight and sound that defined the director's career. The film opens to 30 seconds of an intensely red screen as Walter (soon to be Wendy) Carlos's arrangement of Henry Purcell's "Music for the Funeral of Queen Mary" floods the speakers. This enchanting dirge is a slow descent into something dark and sinister, made more menacing by the angry sea of red that dominates the screen. A brief moment of calming blue interrupts the emotional link, implying perhaps something a little more comforting on the horizon, before quickly returning to red and then settling on the striking stare of one Alex DeLarge (Malcolm McDowell). In less than a minute, Kubrick sets the tone for his entire film.

At first, Alex appears cold and maniacal, with a single eye accented by false eyelashes and his head tilted slightly forward to maximize a penetrating stare from beneath the rim of his bowler cap. But soon it becomes clear that he is grinning at the viewer, and as the camera pulls away, he shares the slightest toast of his enhanced milk beverage, as if extending a personal invitation to join him on a wonderful journey. It is a fantastic visual that is shortly addressed by the voiceover narration of the unique individual himself. 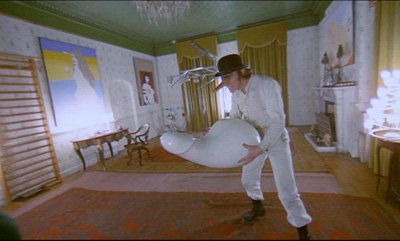 Alex is the leader of a band of droogs, four school-aged hooligans who get their thrills creating terror and mayhem and a little of the ol' ultraviolence throughout London of the not-too-distant future. Exactly how far into the future is unspecified, but a level of fear and lawlessness and decay has clearly affected the culture. Buildings are falling apart, graffiti is prevalent, and strangers are incredibly reluctant to help one another. It's not the over-the-top dystopian future of so many films, but a future gone slightly askew, with a level of anarchy and working class violence just beneath the surface of society. On the streets, thugs communicate in a lyrical Russian-influenced slang known as Nadsat that Burgess created specifically for his novel. The language is clever and rhythmic, and while it takes a few chapters to become accustomed to in the book, it flows so effortlessly from the individuals in the film that it immediately becomes a character of its own. Alex and his droogs take full advantage of this world, hitting the streets after dark to assault the homeless, rumble with rival gangs, run drivers off the road, and break into homes on the outskirts of town to rape the women inside.

Their crimes are horrific, their disregard for others revolting, and yet there's such an incredible enthusiasm for life oozing from Alex's every move that you cannot help but like the guy. He's charming and charismatic, and his narration is almost hypnotic, referring to the audience as his "brothers" and further inviting us in to be accomplices in his insanity. As he brutally assaults an older man and his helpless wife, he dances and sings to one of the happiest and most uplifting pieces of music ever recorded. His actions constantly challenge the emotions of the viewer, because there's a defined realism to his crimes, a brutality rarely seen on film that threatens to turn the stomach, but all the while there's a style and humor and playfulness to Alex's approach that cannot be ignored.

Kubrick has stated that had McDowell been unavailable for the part, he never would have made the film, and I wholeheartedly believe that. McDowell's performance is an absolute tour de force, and the film would likely fall apart completely without his intensity and charisma. For it to work, the viewer must want to follow Alex through all manner of mayhem and enjoy the ride no matter how horrible the act. McDowell achieves this brilliantly, and it is without question the finest work of his career and one of the bravest performances from an actor I've ever seen. 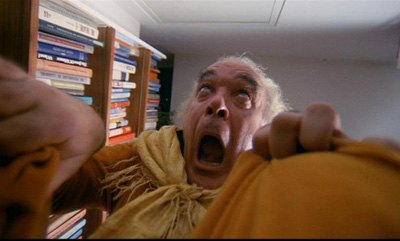 Alex's reign of terror cannot last forever, though, and he is eventually captured by law enforcement, setting up the thoughtful science fiction element of the story. After a brief stint in prison, Alex is offered the chance to undergo a new form of experimental aversion therapy that claims it will rehabilitate him and return him to society as a productive member. This Ludivico Technique seeks to change his actions by connecting a violent, drug-assisted, Pavlovian sickness to anything a board of scientists and politicians deems offensive to society. Alex will be submissive, respectful, and unable to harm a fly, but what is the collateral damage of trying to destroy an individual's free will? Can a society sink so far that it is willing to commit individual personality destruction to gain some measure of social order? Alex is the perfect representative for this internal debate, at once a terrible menace who cannot be allowed to freely roam the streets, yet a charming individual filled with culture and personality. And we are right there with him every step of the way, questioning our own moral compass, constantly on edge between laughing and wincing, unsure if we want to see Alex brutally punished for his crimes or join him for one more invasion into someone's home to joyfully ruin another life. Burgess's original novel takes the story one step further in Alex's journey, but Kubrick's ending is perfection, and from start to finish, A Clockwork Orange is one hell of an entertaining ride.

A Clockwork Orange makes its way to Blu-ray in 1080p with VC-1 encoding and an appropriate 1.66:1 aspect ratio. Colors are generally good, if weak in a few places, and black levels are strong. There is also an increased level of detail throughout, most noticeable when focused on a single subject. Unfortunately, there are many scenes that are woefully soft and some that simply appear out of focus. It's an odd mix of watching along with the film and thinking it looks passable, if underwhelming for high definition, and then a scene just jumps out as looking terrible. Furthermore, there are noticeable flaws in the transfer, including what appear to be digital blocking artifacts and some banding within gradients of color. It's not awful, and on the whole, it's certainly better than the standard definition counterpart, but for a high definition release, I was expecting more.

Audio, on the other hand, is as good as can be expected. Soundtracks are offered in English, French, Spanish, German, and Italian Dolby Digital 5.1 as well as a very nice uncompressed English PCM track that is noticeably superior. Music plays an incredibly important role in A Clockwork Orange, and it sounds wonderful through this mix. Dialogue is properly balanced, and surround channels are used effectively, if sparingly. There are some slight fidelity issues, but they seem more likely caused by the use of clip-on microphones without post-production looping than any flaw in the Blu-ray disc. This soundtrack won't overwhelm with any "wow" factor, but considering the source material, it's an effective reproduction worthy of the high definition label.

Menus are clear and easy to navigate. Subtitles are provided in English, French, Spanish, Chinese, Danish, Dutch, Finnish, German, Italian, Japanese, Korean, Norwegian, Portuguese, and Swedish. All except Chinese and Korean are available for most of the bonus features. 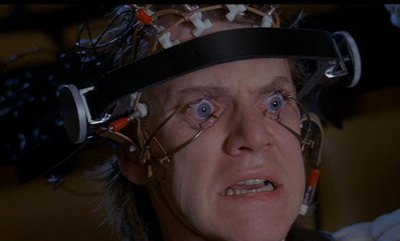 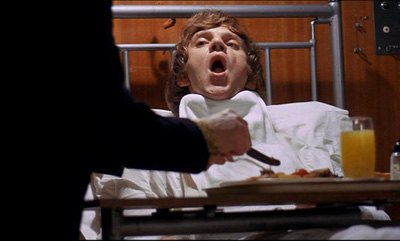 If Stanley Kubrick's 2001: A Space Odyssey is a masterpiece, then A Clockwork Orange is -- quick, what's another word for "masterpiece"? This is an audacious film, packed with style and wit and enduring visuals that penetrate the subconscious. McDowell's performance is remarkable, and Alex forces us to confront our own inherent love for sex and violence as we question just where we draw the lines of morality and justice. Whether you see the film as more of a scathing social commentary or simply hilarious black comedy, A Clockwork Orange is exciting and entertaining from start to finish, and while I'm tempted to really knock it down a peg for the underwhelming video quality, the film is just too good and the bonus features too interesting to go any lower than Highly Recommended.

N.B.: Images in this review exist to look pretty and are in no way representative of the quality of the high definition transfer