Rhino continues to release sets of Mystery Science Theater episodes, which is a good thing for fans of the show.  I honestly did think they'd get this far, but the twelfth set is due out in time for Christmas.  Filled with another four hilarious episodes, this would make a great present for that MiSTie on your holiday gift list.

Most of you reading this are probably already familiar with Mystery Science Theater 3000 (or MST3K for short.)  For those who might have missed the program when it was being aired on Comedy Central or the Sci-Fi Channel (in its later years), here is the concept in a nutshell: some evil scientists have trapped Joel (later replaced by Mike) on a satellite in space.  Dr. Forester (or his mother in the later shows) tortures poor Joel by forcing him to watch bad movies.  Really bad movies.  To keep his sanity, Joel has used parts from the ship to fashion robots, Crow and Tom Servo, who watch the movies with him.  While these movies are playing, Joel, Crow and Tom are silhouetted at the bottom of the screen and crack jokes at the movie's expense.  It sounds simple, but it is one of the funniest shows to ever air on television.  One of the reason's for the show's success is the fact that the jokes come form all over. They will throw in references to pop culture, ancient history, current events, movies, music (classical, jazz, country or rock,) politics, famous people, (and not-so-famous people) and just about anything else you can think of.  Some of the trivia they come up with is so obscure it is amazing.

Of course, the quality of the movies they pick are almost not an issue.  As a general rule, the worse the movie is, the better the show will be.  (As evidenced by Manos, Hands of Fate, a totally abysmal film that is arguably the best episode of MST ever.  Read my review here.)  In any case, I'll give a brief synopsis of the movies, as well as a review of the quality of the episode.

The episodes included on this volume are:

This episode starts off with a great short, Johnny at the Fair, in which a young child of 5 wanders off while visiting the Canadian National Fair. 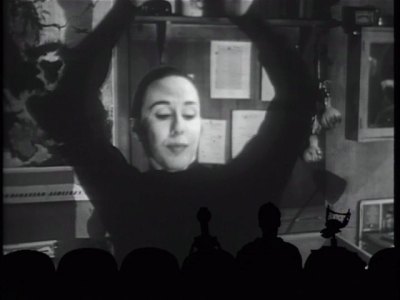 "Geez, the horse from Equis had it better than this." - Crow

Joel and the bots give voice to the boy's inner thoughts as he traverses the fair by himself, which are often hilarious.  One of the best shorts from the Joel period, it's a great start to the set.

Now there's something you don't see everyday...a priest beating the hell out of a guy in a factory. - Tom

The main attraction this episode is a heist picture, The Rebel Set.  Trying to cash in on the Beatnik culture, the movie features Edward Platt (Get Smart) as a club owner who plans to rob an armored car of One Million Dollars!  (I thought of Dr. Evil every time they mentioned the amount.)  He convinces some of the unemployed men who hang around his club to help him pull the job, and then starts killing them off so that he won't have to share the loot.

Hey guys, if this is what 'beat' was all about, I'm glad I'm a shallow post-boomer. -Tom.

This is a solid experiment with some great riffing.  The movie actually wasn't that bad, a typical quick poverty row production that would be worth watching even without the riffing.

One of the highlights is the argument that occurs when Joel and Crow think that they've spotted Merritt Stone in the film.  Tom is forceful in his view that it isn't Stone, who appeared in a number of Bert I. Gordon movies.  The final host segment is a hilarious monolog by Tom, who unravels the whoe "Merritt Stone mystery.

So, all this happened because Johnny got lost at the fair? - Crow

"Could something please just happen!!" -Crow. 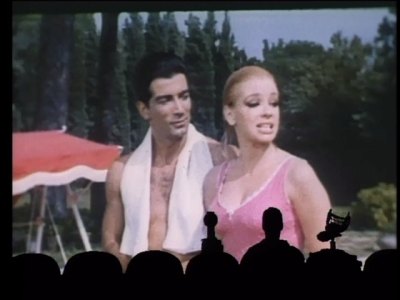 Secret Agent films can be exciting, action filled, and a lot of fun, but this one manages to avoid all of those things and decides to go for confusing, dull, and idiotic instead.  When an evil organization starts smuggling drug tainted gum into a US college town, Secret Agent Super Dragon is called out of retirement.   He decides, for some reason, that the drugs are coming from a Scandinavian country and flies off to Europe with a bumbling side kick.  Once there he gets caught by the bad guys, thrown into the ocean while locked in a coffin, but manages an In Like Flynt (or was it Our Man Flynt) escape by slowing his metabolism until an alarm goes off.  Afterwards he goes to an auction, gets in a fight, then nabs the bad guy.

This was an okay episode, but the movie was so disjointed that it's easy to get distracted trying to figure out just what's going on.  The riffs are good, but not outstanding and there are segments where things start to get dull, but these never last very long.

"'By special arrangement'??  What, did they have to get her out of the  fourth grade?" -Joel.

The host segments make up for the somewhat weak riffs.  Crow comes up with another script, this time it's for a movie entitled "The Spy Who Hugged Me" and features a tough secret agent who is in touch with his feelings and prefers to talk through confrontations rather than resorting to violence.  Later, Joel explains how all spies have to take a class that teaches them how to make witty puns after killing someone.  The episode wraps up with Doctor Forester giving a seminal on how to be a super villain.  All in all one of the stronger set of host segments.

This is a fairly amazing movie.  It's hard to conceive of a movie this bad.  We're not taking Ed Wood bad, or Bert I. Gordon bad....their movies look like masterpieces compared to this monstrosity.  One of the things that Wood and Gordon have over this is that their movies have a plot.  Not a good one, but a plot none the less.  This movie is lacking any sort of story.  There's no conflict at all.  A group of pilots train on a new plane, practice refueling, and then they fly to Europe where they'll be stationed.  That's it.  Almost beyond belief, they manage to drag that out for a couple of hours.

"I really think there's more "nothing' in the movie than any movie that we've seen." - Crow

With so little going on in the movie, you'd think that there wouldn't be much to riff on, but Mike and the boys deliver some great jabs at the repetitive and dull film.  From coming up with a plethora of sexual innuendos to describe the in-air refueling process to the oh-so-easy jokes about the Air Force's "poopie suit" the laughs are pretty solid throughout.

"I wanna kick this movie in the groin and then snag on it." - Crow

The host segments are pretty good too.  The running gag has Crow trying to get onto the "Information Superhighway" and getting stuck in tech support hell.  Overall this is a horrid movie but a great MST episode.

"So basically, according to themselves, the air force is a bunch of leather faced, not-so-bright, heavy drinking, dull-witted speed freaks who poop in their pants and can't make it with women." -Tom

The final episode in this set is a SF film that could have been really good if it didn't suck so much.  With Peter Graves in a bit part, the movie centers around a mysterious compound called Clonus.  The people there, all healthy men and women in their early 20's, are empty headed and seem to live in an Eden-like paradise.   They are all hoping to "go to America" but when makes their goal, viewers discover that "America" is really an operating room there they are anesthetized and wrapped in plastic.  When a member of the group named Richard finds a beer can in a stream, he starts questioning its origin.  When he can't get any satisfactory answers from the guards or teachers, he breaks into the administration building, steals a 'smoking gun' tape that explains how Clonus is raising clones to be used as spare body parts for the rich and famous, and then escapes to the real America.  Things don't go smoothly from there however. 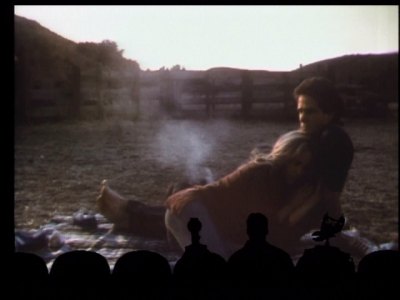 "He's got the finely toned body of a pro golfer" - Crow

This episode started off well, but loses steam by the second half.  The Biography jokes work well, and the jabs at the vacant expressions everyone in Clonus wears are funny, but after a while they run out of new riffs and the episode starts to falter.

The host segments aren't that great either, with one exception.  When Pearl and company meet some space children they tell them to get lost.  Unfortunately these children have the power to control people actions, and make the mads punch themselves until they agree to play.  Even back when this aired, Star Trek parodies were decades old and this particularly uninspired one falls flat.  The only segment that is funny occurs in the middle of the show when Mike and the Bots do an impression of a bi-lingual PBS kids show.  Outrageously funny, it's obvious that the writers have spent time with their kids watch such shows.

The audio on the host segments is very clean, and the riffs coming through loud and clear. The audio during the movies are pretty good, though the film=s soundtracks leave a little to be desired.  There's some light distortion on the soundtrack to Clonus, and the audio to Secret Agent Super Dragon is very muddled and hard to understand.  They actually do a very good job mixing the audio from the movie in with the actor=s comments however, adjusting the levels so that both the riffs and the movie can be heard. Of course there are a couple of times when one or the other isn't easy to discern, but that is fairly rare.

After watching this show for years on the copies that I taped off of Comedy Central when it was first broadcast, I was very pleased at how clear it was. My S-VHS tapes are good but this is much better. The host segments are clear and bright, while the silhouettes during the movie are solid black. The quality of the movies themselves leave something to be desired, but they look just as faded and scratchy as when they were first shown on MST3K, which is how it should be.

This set has a nice set of bonus items.  All of the films come with theatrical trailers, with the exception of The Starfighters (did this movie ever play anywhere besides Air Force Bases?)  There's a 13 minute interview with Don Sullivan who talks about the creation of The Rebel Set, the "Jack Perkins" wraps to Secret Agent Super Dragon when it appeared on the MST Comedy Hour, and an interview with Parts director Robert Fiveson.  He talks about the problems with raising the money for the film, and his lawsuit against the movie The Island, and airing it on MST.  A nice nine-minute interview.

This set also includes the third MST Jukebox.  These are host segments where the guys performed songs, most often spoofing the movie they were watching.  This is another great set of songs.  The songs included are:

Another four great episodes.  While The Starfighters is a horrid film, the riffing makes it enjoyable, and the same can be said of the horribly named Secret Agent Super Dragon.  Ironically Parts: the Clonus Horror is the weakest episode on the disc, but also the best film.  Rhino has released winner.  Highly Recommended.