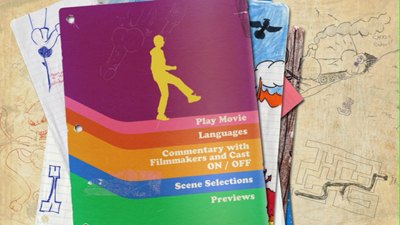 I know that's not a very clever opening, and I'm sure eight million reviewers have already used that line, but I don't care. That's really all there is to it. This is one funny movie.

A raunchy teen comedy with just enough heart beating beneath the insults and penis jokes, the script for Superbad was begun by writers Seth Rogen and Evan Goldberg when they were just thirteen. It's exactly the kind of movie I'd have wanted to see when I was thirteen, where the nerds have a chance to be cool and everything is as crazy and nasty as I'd have wanted it to be. The trick here is that the writers have also grown up enough to know how to make it appealing to adults, too. Producer Judd Apatow and his gang of idiots are on a real streak, knocking out the comedy hits one after another.

Michael Cera (soon to be seen in the excellent Juno) plays Evan, a shy kid who likes hanging out and playing video games and dreams of getting together with that cute girl Becca (Martha MacIsaac). But in a totally nice way, of course. He can talk as dirty as the next guy, but deep down he's all right. Maybe not so much for his best friend Seth (Jonah Hill, Knocked Up), who talks a blue streak and has zero boundaries as far as topics. Then again, maybe Seth has to cover more. He's overweight and not as bright as Evan. Seth didn't get into Dartmouth, but Evan did, and next year they are going to be separated for the first time since they were eight. Seth has a crush on Jules (the totally crushworthy Emma Stone), who just so happens to be throwing a party for graduation. It might be the guys' last time to party down before moving on. 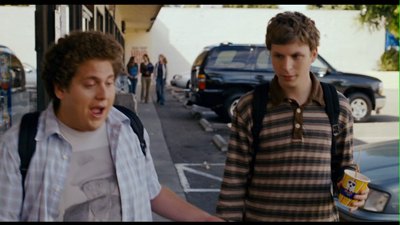 Okay, I admit it, that's got to be the lamest summary of Superbad ever. You put that plot on paper, and it's cheeseville. Superbad isn't like that. Those issues of friendship and how to get with girls in the right way and all that are there, but Superbad isn't about meaningful lessons and warm embraces. That stuff informs the characters, comes out in their actions, but the laughs are what are on top, the comedy is of utmost importance.

Evan and Seth have a geeky friend named Fogell (Christopher Mintz-Plasse) who is bit embarrassing, but who is also getting a fake I.D. This prompts Seth to promise Jules that he will buy the booze for her bash--a plan severely jeopardized when Fogell returns with a Hawaiian driver's license that is emblazoned with the single moniker "McLovin." From there, it's a downhill chase after the prize alcohol, a journey that, like a bad dream, keeps getting longer and more difficult, defying all logic or sense of time and one which can't be escaped. Fogell gets mixed up with a couple of off-their-head cops (Rogen and SNL cast member Bill Hader), while Seth and Evan end up sidetracked at a wild kegger with guys who are prone to violence and girls who can't control their bodily functions. It's one thing after another, each funnier than the last.

Director Greg Mottola has an amazing cast at his disposal. There is no one better than Michael Cera at playing a nervous teen, and Christopher Mintz-Plasse steals the show as the ultra-lame but endearing poser McLovin. It's the kind of performance that can make an awkward kid a star, though you have no idea what he's going to do for an encore. Jonah Hill's gift for gab is also a marvel, and he's able to wrap his mouth around Rogen and Goldberg's extended rants and sell them without coming off as too jerky. It's a real balancing act, knowing when to pull the joke out far enough to get all of the laughs out of it, but not taking it too far so that we turn against Seth. Some of the stuff he says, particularly in reference to women, can get pretty harsh, and it's up to good writers and an unflinching hand in the editing room to yank him back from the brink. In fact, though this DVD cut is the 2-Disc Unrated Extended Edition, I think they may have trimmed one of Evan's scenes near the end. In the final shots of him and Jules, I thought I remembered him making a more prominent obscene gesture at her much like he did in their Home Ec class. There is a trace of that here, but only in a long shot and for just a second. It's a better ending for the character, helping us believe that for all the off-color antics that inspired so many guffaws, the boys really did learn how to be nice guys in the end. (Or, I'm just nuts, and it only doesn't seem as big of a deal to me now.)

If Mottola did trim a little for the DVD, not to worry. He also added four minutes to the running time of Superbad (theatrical cut was 114 minutes, Unrated Extended is 118). You will notice little dialogue tweaks here and there, lines that weren't there when we saw it in the theatre, rather than whole new sections. Scenes with Seth and Evan on the soccer field, the cops conducting their interviews at the liquor store, Jonah confronting the nasty dancing girl's boyfriend, the cops stopping the guys in the suburbs, and Seth trying on jeans are all beefed up from the original cut, though not in totally obvious ways. The only scene that I caught on to right away that wasn't in the old cut was a much more lengthy conversation between Jules and Seth when they first start talking in class. This lays a little better groundwork for the Jules character that causes it to make more sense that she likes Seth.

Given that the plot of Superbad already borders on the rambling, it's probably good that they didn't go wild tossing a million excised scenes back into the mix. The key to a movie like this is to keep the story moving, keep the jokes flying. You'll rarely stop laughing while watching the Superbad - 2-Disc Unrated Extended Edition, whether it be from shock, disbelief, discomfort, or just straight-on funnybone-striking comedy. Keep the volume turned up loud and your finger on the remote. You may just find yourself having to back the movie up to catch the jokes you couldn't hear because you were laughing too hard. 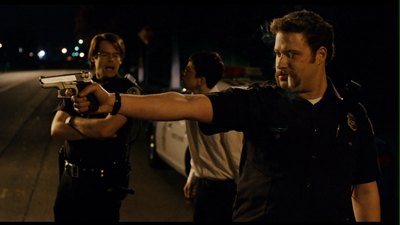 The 1.85:1 anamorphic widescreen transfer on this DVD is top of the line. No problems, no glitches, no complaints.

No skimping on the audio options here. The main feature has a 5.1 mix for its original English soundtrack, as well as for French and Spanish dubs. Subtitles for all three of those languages are also available, as is English Closed Captioning.

Like the video quality, the audio quality is as good as it gets. Clarity does not sacrifice atmosphere, and vice versa.

The audio commentary on the movie is subtitled in English and Spanish, as are most of the bonus features on DVD 2.

The first bonus feature you are going to see are the menus, which feature more of the penis drawings attributed to the Seth character in the film, providing Superbad with one of its most memorable gags. (In reality, they were drawn by Evan Goldberg's brother.) These are on both DVDs.

DVD 1 only has one extra (not counting the bounty of trailers for other movies, which never feels like much of an extra to me), the full-length audio commentary featuring two groups of guys on opposite sides of the country. In Los Angeles, screenwriter Evan Goldberg, and actors Seth Rogen, Michael Cera, and Christopher Mintz-Plasse are in one room; in New York, director Greg Mottola, actor Jonah Hill, producer Judd Apatow, and Apatow's nine-year-old daughter Maude are in another. The two groups can hear each other, but not see each other. Apatow lays down the law that Jonah can't swear while his daughter is in the room, and he covers her eyes when bad stuff appears on screen. Midway through, Jonah and Apatow actually get into a fight about this, and Apatow leaves the commentary. It sounds serious, and is funny in a weird, tense way. It's hard to tell if it's a joke or not. I wouldn't put anything past these guys.

The rest of the commentary is all over the place, though in a fairly entertaining way. The guys try to talk about the production, and they do for the most part, but tangents come often and stick around.

The rest of the bonus features--and there are a lot of them--are on DVD 2. 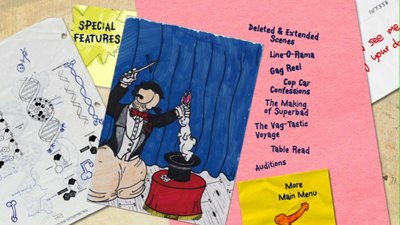 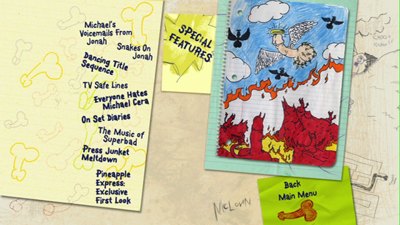 * Deleted and Extended Scenes (12 minutes, 30 seconds): Seven extra scenes, including longer takes of some bits that are in the movie and a couple of scenes related to Evan and Seth trying to steal the booze from Evan's parents.

* Line-O-Rama (4:15): A montage of actors taking multiple stabs at the same lines of dialogue.

* Gag Reel (4:28): Bloopers, including car-related accidents, laughter, and a bee.

* The Making of Superbad (13 minutes) : Your fairly standard behind-the-scenes featurettes.

* Original Table Readings (28:20): Four scenes from the original cast readings of the script. The first is from 2002, and features Seth Rogen as Seth, and since it was on the set of Undeclared, also has Jason Segal as Evan and Martin Starr as McLovin. Oddly, Leslie Grossman is also there playing Jules. Three more scenes from 2006 feature the final cast.

* Michael's Voicemails from Jonah: Audio of a couple of lovey-dovey messages Jonah Hill left for Michael Cera, accompanied by Cera's written explanations of when he received the calls.

* "Snakes on Jonah" (4:44): A prank where two men are sent to torture the animal-phobic Jonah Hill with a bunch of crawling creatures. Absolutely hysterical.

* Dancing Title Sequence (3:17): Raw footage of the shoots with Cera and Hill dancing for what was intended to be the original DVD menu but became the credits sequence for the film.

* Video Diaries (17:42): Clips of members of the cast and crew talking directly to a camera, reporting from the set. This also includes peeks at the actual filming of Superbad.

* The Music of Superbad (13:00): Film from the scoring session for the movie, featuring the session musicians, including members of Parliament-Funkadelic like Bootsy Collins and Bernie Worrell, who played the music.

All told, these are some very good extras, all entertaining and some plain outstanding. You won't be left wanting, that's for sure.

The discs themselves are housed in a regular-sized case with a hinged tray. There is also a cardboard slipcase.

Superbad - 2-Disc Unrated Extended Edition puts the summer's most raucous comedy hit onto DVD with the volume cranked up to 11. A raunchy teen comedy with a foul mouth and just the right amount of heart, Superbad is a laugh riot where the rioting never dies down. With four added minutes and an army of bonus features, this is a value-for-the-money DVD package. Entertainment from the first menu to the last. Highly Recommended. 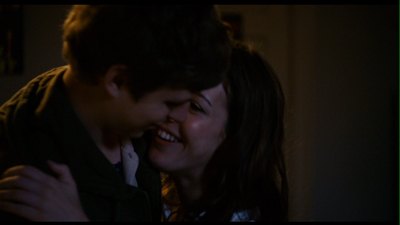