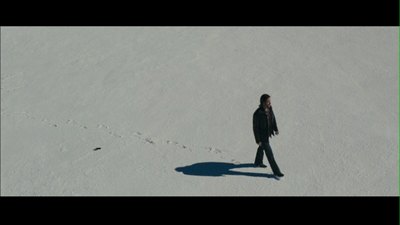 One of my favorite surprises of 2007 was First Snow, a semi-supernatural piece of existential pondering masquerading as a thriller that seemingly came out of nowhere. Unfortunately, it didn't take long for the film to return to whence it came. I tried to tell people about the movie, but almost everyone I mentioned it to had never heard of it. First Snow was a bit of a nonentity.

This is surprising, since after the acclaim that Children of Men received, it would stand to reason that a new movie written by Mark Fergus and Hawk Ostby, two of the scribes behind Children of Men, would have some kind of marketing traction. Add to the press blurb that Fergus is also directing for the first time, and you've got one hell of a pull quote.

But what do I know? Apparently that was not enough to give First Snow a solid push, and it was gone from theatres before spring was even sprung. (You can read my original review here.)

First Snow stars Guy Pearce as Jimmy Starks, a fast-talking flooring salesman who cares more about sealing the deal than pretty much anything else. He's got big plans for himself, involving breaking away and getting his own stock of classic jukeboxes. A little slice of Americana that will give Jimmy the American Dream. Once he has that, maybe he can take some time for other things, like settling down with his girlfriend Deirdre (Piper Perabo). Then again, maybe not. It's possible it won't even be up to him, anyway.

On one of his sales trips, Jimmy has some car trouble, and it strands him at a remote outpost on the highway. Bored while waiting for the mechanic, he jokingly enters the trailer of a drifter fortune teller (the always excellent J.K. Simmons). Vacaro, the soothsayer, gives him a tip on basketball and some encouraging words about business, but he stops short of telling Jimmy something so extreme, it causes Vacaro to have seizures. Jimmy leaves thinking he has avoided some inexplicable con, but then both of the fortune teller's predictions come true. That is eerie enough, but then Jimmy's doctor tells him that he has some potentially fatal heart problems. This sends Jimmy running back to the rest stop in search of the roadside psychic. He forces an answer out of Vacaro: when the first snow falls, Jimmy will die.

The rest of First Snow chronicles Jimmy's obsessing over how he can avoid his own demise. Could it be that his health will be the culprit? Or will it be the disgruntled protégé (Rick Gonzalez) he was forced to fire from the sales force? He digs deep, remembering the sins of his youth and a petty crime gone wrong. He got away scott free while his best buddy (Shea Whigham) got sent down the river. Now that this guy is out of jail, it could be his time to take revenge. It's impossible to know.

Watching Jimmy go through his various reactions to the prediction of his doom is like watching someone go through the stages of grief over someone who has already died. Denial, anger, bargaining, depression, and acceptance--they are all there. He tries to deal with his would-be attackers, he tries to lock himself away to avoid contact with the harsh and threatening world, and he even tries to make something out of his empty life. Unfortunately for Jimmy, he is a victim of the old axiom, "Wherever you go, there you are." For all his struggling, the ultimate irony for Jimmy is that he may be the agent of his own fate. All of his efforts to avoid his death may be what puts the wheels in motion, ultimately garnering the Grim Reaper's attention.

It's the big question: how much control does one man really have over his own destiny?

For a first-time director, Mark Fergus has an assured confidence behind the camera. He certainly knows his way around a story, and what probably makes him such a solid director is his willingness to stay out of the script's way. First Snow requires patience from its teller. The narrative can't be rushed, it has to follow the natural progression of Jimmy's shifting feelings. As they say, good filmmaking is primarily good casting, and Fergus no doubt made his life easier bringing in someone of Guy Pearce's skill level. Pearce has never been afraid to play generally unlikable guys in films like L.A. Confidential and The Proposition. On paper, all of these characters are pretty schmucky, and they wear that schmuckiness on their sleeves. Pearce is smart enough to see that these guys are more than just foibles, to see the code of ethics they follow, that they mean well and are partially hamstrung by their need to be self-sufficient. His charisma as an actor carries the ball the rest of the way. It's what gets him a touchdown every time.

So, well acted, well written, and well directed--what is there not to praise about First Snow? It's got the right amount of tension, the right level of histrionics and drama, and even touches of tenderness in the Pearce and Perabo relationship. All the pieces are there. I just hope this swell movie gets more a fair shake on DVD than it did in the multiplexes. It truly deserves it. 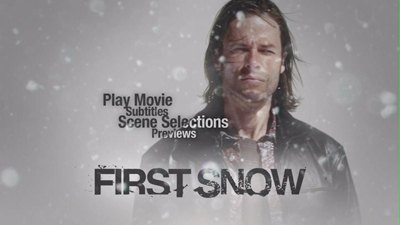 Video:
Sony has put First Snow on DVD with both a full screen 1.33:1 and an anamorphic widescreen 2.35:1 aspect ratio. When you start the movie, you will be given the choice between the two. I watched the widescreen, and the image quality is as good as any big release from the major studios. There are lot of contrasts in First Snow, from bright, open spaces and stark whites to very dark scenes, and the DVD goes between both extremes well. The blacks can be very black, but they can also have a hint of color in them, depending on the design.

Sound:
The original English soundtrack is in Dolby Digital 5.1. The mix job is exceptional, with excellent levels on the dialogue and the proper atmosphere created for the background audio. Fergus employs some carefully planned overlapping effects at different times in the film, and this mastering job captures the moods he was going for.

There are also optional English and Spanish subtitles, as well as Closed Captioning.

Extras:
Trailers for a bunch of other movies, and nothing else. Not even the trailer for First Snow, either. It's hard not to get the feeling that First Snow is merely being dumped out there yet again. I wish I could convince myself that I was just being paranoid. How much effort would a couple of bonus features really have required?

FINAL THOUGHTS:
Despite this DVD being as cursory a bare-bones release as it gets, the strength of First Snow as a movie means it can't be rated as anything less than Highly Recommended. This existential journey is one well worth taking. Guy Pearce leads an amazing cast, and the script by Mark Fergus and Hawk Ostby is smart and full of surprises. I liked seeing First Snow a second time even better than the first. So, even with the caveat that there are no extras on the DVD, one must wonder if it really matters when the movie speaks so well for itself all on its own. Is any further elaboration needed? 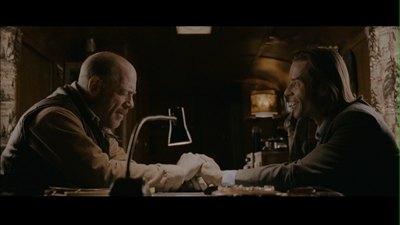