Japanese animation director Satoshi Kon has created some of the best animated movies to ever be released on either side of the Pacific.  While his films are just as creative and visually interesting as Hayao Miyazaki's (Nausicaä of the Valley of the Winds, Spirited Away), Kon's films are more kinetic and have plots that are more complex and convoluted.  Kon's latest feature film, which saw limited theatrical distribution in the US, is Paprika.  Based on Yasutaka Tsutsui's 1993 novel, this film is a wonderful visual feast for the eyes that has an intriguing puzzle-like story that may not be totally clear at first.  The Blu-ray version boasts a wonderful image that really does this animated wonder justice. 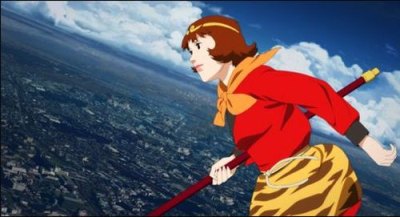 A group of scientists have been working on a new invention to help psychologists, the 'DC Mini'.  With this device, a person's dreams can be recorded onto a computer and then later analyzed by a doctor, or the physician can even enter a patient's dreams and experience what they do while asleep.  One of the first people to use the device is Detective Kogawa Toshimi, who has been haunted by a murder he can not solve.  With the help of the DC mini and a therapist named Paprika, he's slowly making progress to unraveling just what is bothering him.

The problem arises when the prototypes for the DC mini, still in a trial version, are stolen.  A nefarious criminal has come up with another use for the machine; he can cause people, even those that are awake, to experience someone else's dreams.  If reality is nothing more than a fiction that everyone agrees to believe, then by forcing everyone to experience the same dream, this madman can rewrite reality and make himself a god. 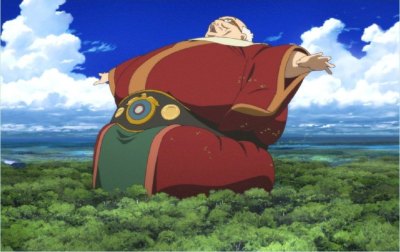 The only ones who can stop him are Chiba Atsuko, a cold, business like researcher who helped invent the DC mini, Detective Kogawa, and Paprika, the therapist who is adept at flowing through other peoples' dreams.    The only problem is that Paprika herself might not really exist.

Right from the first minutes of the film, it's clear that Satoshi Kon is really pushing his creative limits.  Technically superb and wondrously imaginative, the entire film is very reminiscent of the opening credits of Kon's TV series Paranoia Agent.  Like that opening, beautiful images fill the screen but the objects that the image is composed of are oddly out of place.  In Paprika, where much of the film takes place inside someone's dream, there are parades consisting of kitchen appliances and floats made out of stuffed dolls.  Jumping over a railing doesn't lead to the other side of the fence, but instead to a jungle where the jumper is swinging on vines like Tarzan.  Around every corner is another inspired visual, and that alone makes the film worth watching. 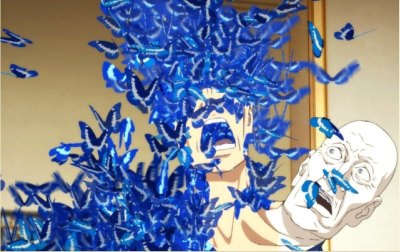 Animated feature movies from Japan are noted for their images and smooth animation, but they are often lacking in plot.  (Miyazaki's films being the exception.)  Fortunately that's not the case with this movie.  In addition to the main story, there are several smaller subplots that wind their way through the film ultimately coalescing together to make a unique and interesting whole.  It can be enjoyed as a rather unorthodox mystery, but digging just a little into the story is very rewarding too.  There are several themes that are repeated and explored, people being attracted to individuals they can't have (as happens with many of the main characters), the difference between your self image and who you really are, and the question of whether reality is subjective are just a few.

The film doesn't take viewers by the hand and explain every plot point in detail either.  Some may find this confusing and off putting, but many will find it refreshing.  Instead of having a character explain the meanings of each and every event and object in the dreams, Kon leaves that to the viewer.  Not only that, but this is a movie that you have to actually watch to understand.  Small visuals that are easily missed propel the story forward in some instances.  The softcore gay porn in on person's apartment, that no one comments upon, goes a long way towards explaining that character's desires and motivations.

One of the most unexpected aspects of the film is that it's surprisingly light and not dark and dreary like just about all films dealing with invading people's dreams (The Cell for example.)  The movie has an uplifting and overall cheerful tone, something that I would never have expected.

In addition to the outstanding animation and well thought out plot, there's also an excellent score from Susumu Hirasawa.  I don't usually pay attention to anime scores, but this one really struck me as being spectacular.  The music blends in perfectly with the visuals, creating a film that is both interesting visually and aurally. 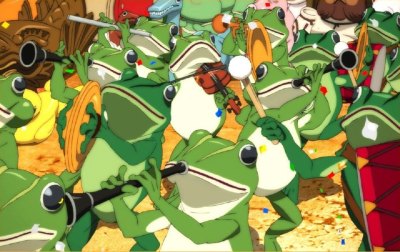 This film comes encoded at 1080p with the MPEG-2 codec and presented with a 1.85:1 aspect ratio mimicking the original theatrical release.  The movie looks just splendid.  Containing one of the widest color palates in recent memory, the various hues and shades are all bright, vibrant, and very strong.  The night scenes are particularly impressive, as these scene look like they actually take place at night rather than trying to mimic what a live action night scene looks like.  Do to the lighting that's needed, live action nocturnal scenes are rarely realistic, presenting varying levels of light depending on where the actors are standing.  In this film the darkness is even and constant and it's hard to see some things, just like in real life.  The blacks are solid and the deep too.  The level of detail is excellent too, something that I'd expect from an animated feature.  The only real complaint I have is some minor posterization in a few scenes, but this wasn't very noticeable.

The disc comes with Dolby True HD tracks in both the original Japanese and an English dub.  I screened the film with the Japanese track and did a spot check on the English dub, and both sounded phenomenal.  This movie has a very active soundstage, with dialog and especially audio effects panning from side to side and front to back quite frequently.  What's more amazing is that these effects are almost transparent.  They match the action on screen so well that half the time you don't even notice them. The rears were put to especially good use during the parade scenes when the ambient sounds seemed to be coming in from every angle and position.  You could sense the groups pass by from the sound just as strongly as you could from the visuals.  The range was also excellent with both the highs and the lows coming though strong and clear.

There are also DD 5.1 tracks in Spanish, French, Cantonese, Mardarin, Portuguese, and Thai, and subtitles in those same languages.

The extras included with this film are okay, but nothing to really write home about.  Things start off with a commentary by director Satoshi Kon, composer Susumu Hirasawa, and associate producer Morishima.  This is in Japanese, but there are optional English subtitles.  I wasn't enamored of this track.  It was alternately too technical, which was pretty dry, or too metaphysical, which gets a little absurd.  At one point Kon says "I think that if someone from prehistoric times saw Paprika they'd say "That's how it is!  Why would you make a movie about such everyday occurrences?"  Okay....

Next up are a selection of SD featuetters.  Tsutsui and Kon's Paprika is a making-of featurette that runs around half an hour.  This has interviews with the cast and crew as well as the director and author of the source novel discussing their works.  A Conversation about the "Dream" also runs half an hour and features Tsutsui, Kon, Megumi Hayshibara (Dr. Chiba), and Toru Furuya (Tokita) talking about their dreams.  I nearly started dreaming myself as this one almost put me to sleep.

The Dream CG World was more interesting.  It examined how the CGI effects were created and how they meshed with the more traditional cell type of animation.  The Art of Fantasy looks at the work of Art Director Nobutaka Ike and how he created Paprika's look.

There is a bonus item unique to the Blu-ray disc:  storyboard comparisons for three scenes.  It was a nice addition and runs about three minutes.

While there are doubtlessly a lot of people who will not like this film because it is a bit confusing in parts, those who take the time to unravel the story will be rewarded with an excellent film.  The visuals are just stunning, and the plot is engaging as well.  This Blu-ray disc does a great job of reproducing the sound and image of the film too.  Highly Recommended.