Stanley Kubrick continually reinvented himself, surpassing the work of his contemporaries in a deliberate pursuit of perfection and defying the words of his critics with each successive film. After conquering the science fiction genre with 2001: A Space Odyssey, he squashed criticism of the length and expense of the project with the rapid turnaround of A Clockwork Orange on a relatively small budget of just over two million dollars. However, with the American box office disappointment of 1975's Barry Lyndon, he again faced criticism that his film was too long, too artistic, and inaccessible to a mainstream audience. Kubrick's response: an easy-to-promote thriller in a dependable genre starring a bankable lead. But for all of its mainstream appeal, there is nothing commonplace about this adaptation of the Stephen King novel, and Kubrick's The Shining proved every bit as revolutionary and perception-defying for the horror genre as his celebrated masterpiece did for science fiction a decade before. The film is now available on Blu-ray with a beautiful transfer that preserves the theatrical aspect ratio along with a strong collection of new bonus material. 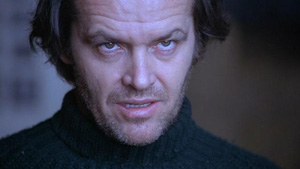 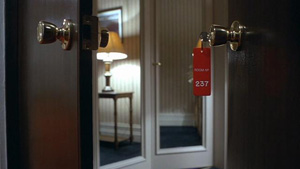 Jack Torrance (Jack Nicholson) is a struggling writer who has accepted the caretaker position at a secluded resort in the Rocky Mountains of Colorado. The winter months are especially harsh at the Overlook Hotel, and storms frequently render the entry road impassable, making it economically infeasible to remain open for business during a period of about six months. As caretaker, it is Jack's responsibility to cycle the heating system, perform routine maintenance to the structure of the property, and generally keep the elements from seriously damaging the hotel over a long stretch of complete neglect. It is not a physically demanding job, but the prolonged isolation tends to scare away most applicants. Fortunately for Jack, isolation is just what he is looking for, and he sees this as an opportunity to make some serious progress on his novel. Besides, he'll have his wife Wendy (Shelley Duvall) and young son Danny (Danny Lloyd) to keep him company throughout the duration.

But Danny is no ordinary child. It is strange enough that he is so dependent on an imaginary friend named Tony who lives inside his mouth and speaks through his finger, but his mother is quite concerned over episodes he's had where he appears to go into a trance or catatonic state of disconnect with the world around him. What we learn from the head chef of the Overlook Hotel, Dick Hallorann (Scatman Crothers), is that Danny possesses a heightened spiritual connection with the world, a mix between telepathy and ESP that his grandmother called "shining". Hallorann explains that events leave a spiritual trace of themselves behind, much the way the smell of burned toast lingers long after the fact, and a hotel that has been through as much as the Overlook carries with it a great deal of spiritual baggage. As the months go by in this isolated hotel, "Tony" becomes more and more agitated by his surroundings, and the cabin fever effect begins to take hold of Danny's father Jack, driving him ever closer to insanity.

In the original Stephen King novel, it is clear that the Overlook Hotel is haunted, a character unto itself with overt supernatural abilities and spiritual manipulation of the Torrance family. Kubrick's adaptation (with assistance from screenwriter Diane Johnson), wisely abandons almost all of that to create a much more personal and disturbing psychological drama. Jack's slow descent into madness is chilling, because the viewer isn't quite sure whether something supernatural is at work here or if the recovering alcoholic is simply losing his mind to the isolation the way a former caretaker once did. The build is careful and deliberate, so that when Jack ultimately rages through the hotel with an axe in full-on "Here's Johnny!" mode, the loss of control is believable with a realistic sense of terror rarely captured throughout the genre. 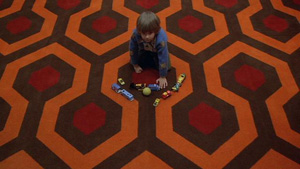 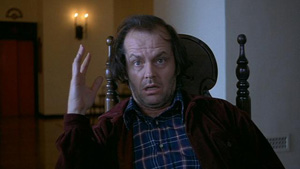 Steven Spielberg has said that whether you like a Kubrick film or not, it is impossible to take your eyes away from it, and this is never more evident than in the cinematography of The Shining where wide-angle lenses of hypnotic deep focus constantly beckon us into the haunting corridors of the Overlook Hotel and its outdoor hedge-maze. When combined with the groundbreaking use of the newly invented Steadicam, following these uncertain characters around the unsettling vastness of their new home becomes a spine-tingling experience. To this day, tracking Danny a few inches off the ground as he pedals his Big Wheel down the long hallways and around foreboding corners makes my skin crawl. I know exactly what will happen and when it will happen, but the alternating sounds of hardwood and carpet as the camera tracks just a second behind Danny when he rounds each corner gets me every single time I watch this film. It's an incredible effect and a perfect example of how to use sound and pacing and camera movement to create a level of tension that cannot be achieved through traditional scare tactics.

Another technique that keeps the viewer in a constant state of unease is the complete lack of attention to detail in terms of scene continuity. Every film has its continuity issues, but The Shining is packed with tiny little flaws that are not readily apparent on the surface during the first viewing but that build into the subconscious to create a heightened level of disorientation. Whether these issues were intentionally created, consciously ignored, or just random good fortune, the effect is undeniable. Nothing ever feels quite right inside this hotel, and even as the story reveals more about itself, we never fully grasp the entirety of it all, the duality at work beneath the surface that addresses the nature of evil within. A constant theme of reflection is established in the opening shot that permeates the film as Jack and Danny both interact regularly with mirrors, along with an offset duality that infects the plot: the twins who aren't really twins, Charles and Delbert Grady, Jack and the man in the photograph. It all weaves together into a story you can't completely put your finger on that questions whether the hotel is the source of some great evil or if there's something inside of these characters struggling to come out.

The finished product is a thoroughly creepy affair. Nicholson's intensity is put to great use as his madness builds to disturbing but authentic levels, and the bug-eyed Shelley Duvall is perfectly cast as the doormat wife who descends into complete hysterics as the events unfold. Everything builds slowly and methodically, making the final act all the more powerful, and watching Wendy scamper around the hotel in fear, uselessly holding aloft a knife as she witnesses the revelations of the film's final minutes, makes for wonderful theater. The Shining has plenty of good scares, quite a few moments of humor, and is packed with unnerving tension from start to finish, as Kubrick's focus on his characters instead of the hotel itself poses disturbing questions about the true source of Jack's actions and the motivation behind them. 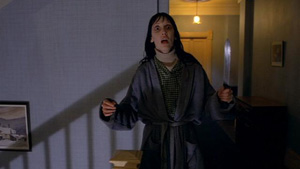 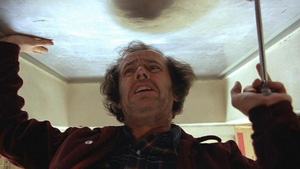 The Shining is one of those Kubrick titles that has been the subject of framing controversy over the years, as it was filmed with an open matte to accommodate home video releases but still be framed in a 1.85:1 aspect ratio for the theatrical presentation. For various reasons that are the subject of a debate outside the scope of this review, previous releases on DVD have been in a full frame format that presents the entire image as it was originally filmed without the cinematic matting. Considering that the high-definition market is more geared towards a cinematic presentation, however, this Blu-ray release thankfully presents Kubrick's horror in a more appropriate -- and for my money, far more effective (see comparison below) -- 1.78:1 widescreen ratio (the case says 1.85:1, but it fills a 16x9 window).

The transfer presented is in 1080p with the VC-1 codec, and the improvement over previous DVD releases is significant. Most notable is the level of detail now present with the high-definition resolution. Jack shows up for his interview in a textured shirt-and-tie outfit straight out of the late 1970s, and the three-dimensionality of the patterns in his tie, as well as his coat, are fantastic. Color definition is also a significant step up in terms of quality. The Shining is certainly a dark film with colors that are the product of its time, but previous releases always felt a little too muted to me. With this Blu-ray release, there's a vibrance to the colors that better showcases the subtle color choices that enhance the style of the film. While most of it has been cleaned up, there is still some print damage to be found throughout, and viewers expecting a "wow" factor should be aware that the film was shot in a soft style with considerable grain. It's not a perfect high-definition presentation, but it's quite good, and much better than the release of A Clockwork Orange.

Audio is offered in English in both uncompressed PCM 5.1 as well as Dolby Digital 5.1. French and Spanish are also available for the latter. The uncompressed track has a fuller sound, but neither is much to write home about. The presentation is mostly just a faithful reproduction of the original track with small amounts of ambiance and score drifting into the rear channels. Dialogue is balanced well, and the track is perfectly adequate; it just doesn't see much benefit from high-definition technology.

When I talk with people about Kubrick's films, it seems there's always one or two that someone hasn't seen before; but everyone is familiar with The Shining, and most of them were creeped out by it. It's accessible, with an easy-to-sell plot and a monster star at the helm, but it is far from commonplace, and its influence is obvious in some of the best thrillers of the last 20 years. As he did many times throughout his career, Stanley Kubrick took a good book, found a visual way to approach it that would be perfect for the cinema, and then turned it into an incredible film. The Shining is one of a handful of films that makes my spine tingle no matter how many times I see it, and Nicholson's powerful performance sticks with me well after the credits have completed. This Blu-ray release is not perfect, but it is a marked improvement over the past, with a good slate of special features. Highly Recommended.

N.B.: Images in this review exist to look pretty and are in no way representative of the quality of the high definition transfer