I would have loved to have had the chance to sit in on the pitch for this TV show.  Someone must really be able to sell an idea, because the concept behind Prison Break sounds stupid:  Two guys are trying to break out of jail.  That might make for a great movie, but an entire TV show?  Whoever did the talking had a silver tongue and I'm glad they did because Prison Break turned out to be one of the best new shows of the 2005-2006 TV season.  Now this kinetic, suspenseful first season is out on Blu-ray.  With a beautiful image and a very decent lossless audio track, the show was never had a better presentation. 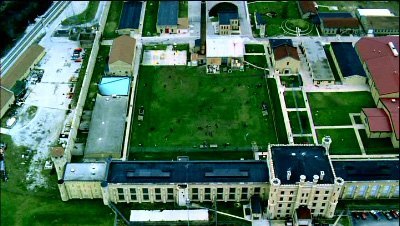 Michael Scofield (Wentworth Miller) is an engineer who is pretty much alone in the world.  Both of his parents are dead, and his only brother, Lincoln Burrows (Dominic Purcell), is a no good low-life who's on death row for killing the vice-president's brother.  When Michael talks to his estranged brother in jail however, Lincoln convinces him that he is innocent, the video tape showing the murder be damned.

Scofield realizes that whoever set his brother up is too powerful to fight directly, so he comes up with a plan.  He makes extensive preparations, including getting a full body tattoo, and then robs a bank.  He's caught naturally; he doesn't even try to get away, and is sent to the same institution as his brother.  Scofield's plan is to break out of the prison with his brother before his execution, and the main asset he has are a complete set of the prison's blueprints, hidden in the tattoos that cover his skin.

While Scofield's working from within the prison, Burrows old girlfriend, Veronica Donovan (Robin Tunney) is working from the outside.  A licensed attorney, Veronica, along with a fellow anti- death penalty attorney, is trying to get a stay of execution with little luck.  Someone notices that they are digging into the Burrows case, and they don't like it.  The more they try to make Veronica back off, the stronger her conviction grows that Lincoln was set up. 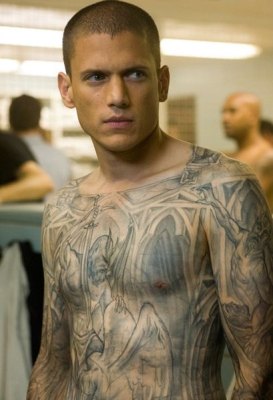 Behind bars, things don't go smoothly.  Michael has to navigate the dangerous prison waters while getting an incarcerated mobster, John Abruzzi (Peter Stormare), to help him in his efforts.  There're also the guards to worry about, especially Captain Brad Bellick (Wade Williams) who has it in for Scofield, and Michael needs the cooperation of his cellmate Fernando Sucre (Amaury Nolasco), who's supposed to be out in 18 months and doesn't really want to risk spending the rest of his life on the run.  Even if he can get past all of these, there's still the fact that his brother is heavily guarded on death row, and doesn't get to mingle with the general population.  Even if they can escape, who is behind the set-up, and why do they want this guy dead so badly?

Prison Break is a tense, suspenseful show in the mold of 24.  There are a lot of twists and turns in the plot, each more shocking than the last.  Not only does each episode end in a surprising cliff-hanger, but the scene before each commercial is also a tense nail-biter.  While that type of show isn't new, the creators are really able to keep the excitement and tension high through the entire season, which is very impressive.  Hardly ten minutes goes by where someone doesn't get in a dire predicament, discover something shocking, or escape from danger by the skin of their teeth.

The show's only downfall, and it isn't a devastating one, is that viewers have to be willing except a long string of last minute saves and some pretty conveniently timed coincidences.  There are a few minor plot holes and contradictions (Bellick knew what Sucre's girlfriend looked like, so why wasn't he suspicious when 'her' panties, as he remarked, belonged to a large woman?) that are more evident if you watch the show over a short period of time. 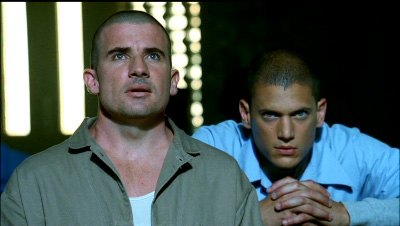 The acting is very strong across the board.  Long time character actor Stacey Keach plays the warden perfectly.  He's a loving husband who honestly wants to rehabilitate the inmates, but who can turn cold as ice in a second.  Wentworth Miller comes across as a little cold and aloof, but that's the way he's chosen to play the role and it works out well.  He's in the prison, but not part of it.  He's the only one who wanted to be there, and that sets him apart from the rest of the inmates.

The only role I had a hard time swallowing was that of Sarah Wayne Callies (Dr. Sara Tancredi).  While Callies does a great job in the role, just watch the prison riot episodes to see how strong of an actress she is, the character herself is hard to believe.  She's a gorgeous, bright doctor who happens to be the governor's daughter, but is still single with no attachments and works as an underpaid prison physician.  On top of that, she falls for a heavily tattooed convict.  I really had to work to suspend my disbelief on that one.

The 22 episodes that constitute the first season come on six discs (four episodes each on the first five discs with the sixth containing two episodes and the bulk of the bonus items.)  The DVDs are housed in a double width case that has two inserted 'pages', with one disc on each side of a page and the final two located on the inside front and back cover.  It's a nice, compact system that works well.

The 1080p/AVC encoded 1.78:1 widescreen image looks excellent, with only a few minor imperfections to keep it from rating all five stars.  First the good:  the detail, contrast, and black levels are all excellent.  There are a lot of low light scenes, and these all look outstanding.  Details in the shadows are strong and the show creates a feeling of darkness without making the characters or objects hard to see.  During the exterior scenes, and shots located outside of the prison, the lighting is much brighter.  This creates a nice contrast to the drab lives of the convicts and makes their situation seem all the more desperate.  In these shots the colors are more vivid and solid and the image has a good amount of visual pop.

The only real complaint is that the colors have been boosted in some situations.  The green grass of the exercise yard that is shows in a helicopter flyover at the beginning of every episode looks enhanced.  The green is just a bit too green and vibrant to be real.  There's also an occasional encoding error that causes fine lines in the background to shimmer slightly as the camera pans over them.  This happens when a chain link fence is in the background and occasionally with the cell bars.  It's fairly minor though and never becomes distracting.

This show comes with a DTS HD 5.1 Master lossless soundtrack that sounds very good, especially for a TV show.  The show is mainly dialog driven, with an occasional gun shot, but nothing more than that, but the soundtrack does a good job of creating the sounds of a prison as well as the echoes of the tunnels and pipes beneath the facility.  The sound effects and incidental music come through strong and clear and add a lot to the atmosphere that the show has.  While the audio doesn't have the same impact and richness as a theatrical feature, it does suit the show well.

This HD season set comes with all of the bonus features that were in the SD set, but they are presented in 480 i/p.  Six episodes have commentary tracks and there are two on each show.  That means that basically all of the actors and creators get a chance behind the mic including Paul Scheuring, Dominic Purcell, Brett Ratner, Mark Helfrich, Wade Williams, Matt Olmstead, Silas Weir Mitchell, Amaury Nolasco, Robert Knepper, Sarah Wayne Callies, Robert Mandel, Nick Santora, Peter Stormare, Garry Brown, Bobby Roth, Karyn Usher, Greg Yaltanes, and Zack Estrin. The notable exception is Wentworth Miller (Michael Scofield), and I would have enjoyed heard Stacy Keach too.  While I have to confess that I didn't listen to each minute of every track, the parts I sampled were generally entertaining and informative.  Some plot points are revealed, so viewers who haven't seen the whole season should avoid these until afterwards.

There are deleted scenes to the episodes Allen, And Then There Were 7, Brother's Keeper, J-Cat, and End of the Tunnel.  These were mainly short and didn't add much to the show.  It's easy to see why they were cut.

The sixth disc has the bulk of the extras, and it starts off with a good making-of featurette.  This has on-set interviews with the cast and crew and they do more than say that everyone is wonderful to work with.  They talk about the show, the locations, plots and sub-plots, and the characters and it's an entertaining half hour look at the show.

Beyond the Ink is a 16-minute look at the intricate tattoo that the character of Michael Scofield has in the show.  This looks at the creation and application of the fake body art on the actor and is pretty interesting.

If These Walls Could Speak: Profile of the Joliet Correctional Center is a nine-minute look at the real-life prison that inspired the show, and Making a Scene - Prison Break, talks about trial and tribulations as well as the advantages of filming in a real prison.   Finally there are a series of promos for the show.

An anxiety-filled, suspense-riddled, and tension-packed show Prison Break is exciting and thoroughly engrossing.  It is really amazing how the creators were able to keep the show going at such a high level for the entire season. This Blu-ray package makes the show really shine, with a wonderful image, solid sound, the entire set of bonus items ported over from the SD box.  If you're looking for a roller-coaster ride of a show, this is it.  Highly Recommended.