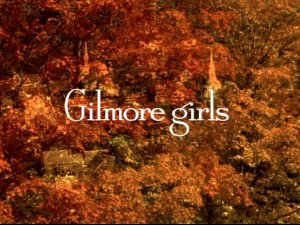 Gilmore Girls is a television drama that first aired in 2000 and completed its seven season run in 2007. This review covers the series' seventh and final season. The premise is about a single mother from a wealthy family who had a daughter at a very young age. She went out on her own to raise her child by herself. The show follows their relationship with each other, family members, friends, and romantic partners, as well as their careers and academics. The show features a quirky cast and witty dialogue that engages and entertains. For more details about this series, please refer to DVD Talk's reviews of season one, season two, season three, season four, season five, and season six.

Season seven picks up where six concluded: Lorelai and Rory's love lives are up in the air. Lorelai and Luke ran into some problems with their relationship. Lorelai made the situation worse by running into the arms of another man. After she tells Luke about it, the relationship goes down the tube. In the aftermath, Lorelai and Christopher explore a real relationship together. However, Luke is distantly in the picture. The Lorelai-Christopher-Luke love triangle is a key development this season.

Rory's love life is also a big contender this season. While last season she and her uber-rich boyfriend Logan Huntzberger had their fair share of problems, things are further complicated. They took some time off, had a couple of side-affairs, and got back together. However, towards the end of season six, Logan's dad was pushing the responsibility of life on him. Logan was forced to get a job and stop enjoying a life of a free bird. He had to move to London and leave Rory behind (they were supposed to travel around Asia). In this season, their romance continues, but faces some long distance challenges. When Logan comes back to the states, a myriad of new issues are introduced.

Another pretty big development this season deals with the two supporting characters Lane and Zach. In the past season, their courtship was plagued with problems, but eventually led to marriage. In the beginning of season six, they return from their honeymoon. The story Lane tells Rory about their supposedly romantic vacation is hilarious. It was a complete disastrous. The drama in the Lane-Zach relationship also gets turned up a notch when Lane finds out she is pregnant.

As for other key season seven developments, there are a number of things that happen. Richard is appointed as an adjunct faculty member at Yale. He comes to Rory's school to teach Economics. Emily is pulled over for drunk driving and put in the slammer. Luke faces a custody battle for control of his daughter April. Christopher considers letting the mother of his child back into their life, which Lorelai does not think is a good idea. Sookie finds out she is pregnant.

Overall, Gilmore Girls' seventh season has some pretty big developments that fans will want to experience. However, I was not as moved by this season. I am not sure if it was due to my mood or some other factor, but watching this season was not the most exhilarating or entertaining experience. The season when compared to past Gilmore Girls episodes I have seen were just not as good. The season had its up and downs. However, more often than not I found myself lost (in a bad way) with Lorelai and Rory's longwinded dialogues. In the end, I did not really get into season seven as much as I did with season six. There are some good moments, but not enough. 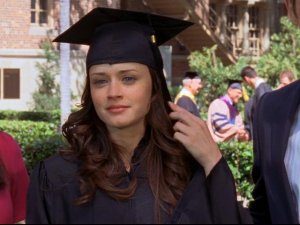 1. The Long Morrow: From bed to worse. The morning after her blowup with Luke, Lorelai wakes up next to... well, someone else. And complications definitely ensue. Logan leaves Rory a puzzling parting gift.
2. That's What You Get, Folks, for Makin' Whoopie: Mexico sucks: Lane returns from her honeymoon with a flinty attitude toward sex, an intestinal parasite and a souvenir. And Luke has a tough time telling TJ and Liz that his engagement disengaged.
3. Lorelai's First Cotillion: What if I don't want to do what I want to do because I want to do it, but because they don't want me to? Friday dinner and a pop tart get Lorelai wondering what has been motivating her actions for over 20 years.
4. 'S Wonderful 'S Marvelous: Togetherness: Lorelai and Christopher start dating, Rory meets some artistic new friends, April moves in with Luke short-term and Emily gets up close and personal with the local constabulary.
5. The Great Stink: A dill wind. A derailed trainload of pickles lends Star Hollow a certain air. And that's not the only sour situation: Lorelai and Christopher quarrel about his ex's sudden devotion to motherhood.
6. Go Bulldogs!: A perfect autumn weekend finds Lorelai and Christopher attending Parents' Weekend at Yale - with Richard and Emily. Meanwhile, Luke has a date with a vegan. Yeah, that's going to work out.
7. French Twist: In Stars Hollow, Rory is clueless about her future. In Paris, Christopher has his and Lorelai's future all mapped out. In panic mode, Lane discovers her future: She's expecting twins.
8. Introducing Lorelai Planetarium: Christopher knows exactly how Rory will feel when he and Lorelai tell her they're married: happy! They tell her. How does she feel? Not happy. And when April falls ill, Luke calls the one person he can depend on: Lorelai.
9. Knit, People, Knit: Odd man out. Eager to make Christopher part of the Star hollow community, Lorelai sets him up on a man date with Jackson. After holding his newborn niece, Luke makes a big decision about April.
10. Merry Fisticuffs: Peace on Earth. The Yuletide finds everyone spoiling for a fight: Rory vs. Logan, Rory vs. Lucy, Luke vs. Anna, Luke vs. Christopher, Lorelai vs. Christopher, and Kirk vs. the local middle-school kids.
11. Santa's Secret Stuff: Big problem: An XXL-sized Lane fears mother hood means the end of personhood. Big secret: Lorelai writes Luke a character reference for his custody case... but doesn't tell Christopher. 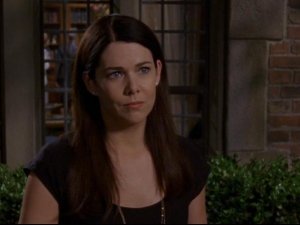 12. To Whom It May Concern: This is all a new marriage needs: Christopher finds the reference Lorelai wrote for Luke... and freaks. And what more could an established marriage need? Jackson and Sookie find out.
13. I'd Rather Be in Philadelphia: After Richard's heart attack, Lorelai, Rory and Emily anxiously await news in the hospital waiting room. Then Logan arrives. Then Luke. But - despite frantic repeated phone calls from Lorelai - not Christopher.
14. Farewell, My Pet: When one of Michel's beloved chows goes to that great doggy house in the sky, Lorelai organizes a memorial service. Maybe she ought to organize another memorial service, too - for her marriage.
15. I'm A Kayak, Hear Me Roar: Lorelai finally gets up the nerve to tell Emily that she and Christopher are phffft. And Logan though he bought an internet company. Instead, his dreams of entrepreneurial glory bought the farm.
16. Will You Be My Lorelai Gilmore?: Just before Lane's baby shower, Lorelai must mediate a Kim family grudge match. And Logan finally tells Rory that his business has gone belly-up... then takes off for Vegas with his old prankster buddies.
17. Gilmore Girls Only: All three Gilmore girls hit the road for North Carolina and Mia's wedding. With Lane due any minute, Zack turns to Luke for advice on being a dad. And - surprise! - Logan may be growing up at last.
18. Hay Bale Maze: Brief encounter: Stars Hollow's centerpiece attraction for the annual Spring Fling brings Lorelai and Luke face to face. And the post-=grad job hunt has Rory dithering in a most unRory-like manner.
19. It's Just Like Riding a Bike: Lorelai needs help shopping for a new car. Enter Luke. Paris decides that having a boyfriend complicates her grad-school decision. Exit Doyle.
20. Lorelai? Lorelai?: On karaoke night, a tipsy Lorelai takes the stage to sing... and exposes her feelings for Luke. And Logan returns to Stars hollow with a question for Lorelai.
21. Unto the Breach: Pomp and circumstances. Rory's graduation brings the expected: tears, hugs, a Richard-and-Emily party, a communal bottle of champagne and a diploma. And it brings the unexpected - a heartfelt suggestion from Logan.
22. Bon Voyage: An exciting job offer for Rory and a beneficent gesture from Luke add up to a big surprise party, where every Stars Hollow friend, neighbor and eccentric exuberantly celebrates the Gilmore Girls. 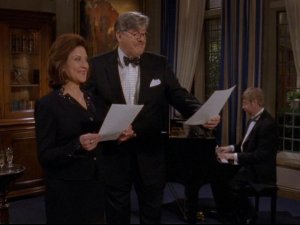 
Video:
The video is given in its original television aspect ratio of 1.33:1 ratio full frame color. The picture quality for this transfer is pretty good. There are some evident compression artifacts, but nothing really bad.

Audio:
The audio track supplied with this release comes in English 2.0 stereo sound. It sounds good with dialogue easy to hear and no noticeable audio distortions. There is also support for closed captioning and subtitles in Spanish and French.

Final Thoughts:
While my past viewing of Gilmore Girls has been somewhat sporadic (season one & six, and random episodes in between), I have thoroughly enjoyed the engaging and witty dialogue the show has to offer. However, the show's final season was not nearly as engaging. There were some delightful moments and fun developments, but the season seven content just didn't work as well for me. The dialogue, which is usually engaging and witty, sometimes came off as long-winded. In the end, I found Gilmore Girls' seventh season to be enjoyable, but in small doses.