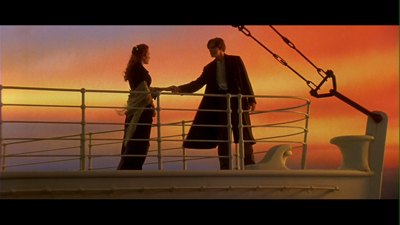 James Cameron's 1997 blockbuster Titanic has been released on DVD twice already, including a rather spiffy three-disc collector's edition that hit stores in late 2005 just in time for the holidays. That version was packaged in a nice box and can still sometimes be found at most online retailers for 1/3 of its original retail price. So, why a third version now when the second seemed to do the job? Why indeed. The Titanic - 10th Anniversary Edition is little more than the first two discs of the Special Collector's Edition repackaged in a slimmer case befitting its truncated form.

Titanic is a movie that has a reputation of equal size to its subject. Upon its release, it became a sensation, defying box office odds by placing relatively unknown stars in a movie that crests past the three-hour mark. James Cameron, who had captained the successful Terminator franchise as well as the second film in the Aliens series, risked the inevitable comparisons to the folly of the people who built the boat itself and decreed their creation unsinkable. Cameron's film was gargantuan in budget, and many predicted that its own bloat would send it straight to the bottom of the list of the worst box office bombs of all time.

What these naysayers failed to bank on was James Cameron's uncanny understanding of Big Entertainment. Titanic was designed to have a little something for everybody. Fans of eye candy and period pieces could gobble up all of the impressive detail put into creating the infamous ocean liner, while the romantic among us could swoon to the romantic travails of Jack and Rose. The gooey love stuff would make stars out of Leonardo DiCaprio and Kate Winslet, so much so that DiCaprio is still struggling to make people forget he was a teen heartthrob and give him a little more credit for his considerable acting chops.

And then there is that second half. Once the Titanic meets the iceberg at the movie's midway point, Cameron pulls out all the stops and its full steam ahead from there. In a race against time, Jack and Rose have to leap over social conventions, debris, and several tons of water to try to get off the sinking ship alive. As if that weren't scary enough, Billy Zane, playing Rose's super rich but super douchey fiancée, ends up framing Jack for robbery and then chasing him around trying to shoot him.

For other filmmakers, that's at least two movies right there, if not three. Not James Cameron, though. He also has to bring alive Titanic lore, including the Unsinkable Molly Brown (Kathy Bates) and the noble band of musicians who continued to fiddle through the night even as the water circled around their feet. (That part always chokes me up a little. How grand to die doing exactly what you love!) On top of that, Cameron invents the added element of a rare and beautiful diamond, the Heart of the Ocean, that becomes what Billy Zane is chasing just as much as he is chasing the woman who will be his wife. It's also the impetus for why this story is being told. In a modern day framing sequence, a treasure hunter (Bill Paxton) is looking for this diamond, but instead he finds the elderly version of Rose (Gloria Stuart) and more about the Titanic than he even realized existed.

You know what, though? James Cameron knew exactly what he was doing. Even after all these years, Titanic is still an excellent film. This is slick entertainment at its best, smoothed out to such a degree that you barely see any of the seams showing. The writer/director/producer may have spent a lot of bucks on this movie, but he created one big bang with those bucks. Romance, action, and tragedy in a special effects extravaganza. How odd in this day and age when there is a new FX epic stinking up theatres every weekend, that we can actually say, "They don't make them like that anymore."

So, yeah, if you already own the three-disc Titanic, hold tight, you have gone as far as DVD will currently take you on this cruise. If you don't own that, you need to weigh your options here. The third disc that has been excised from the collection includes an extensive gathering of deleted scenes, galleries and extra short documentaries, and the 40-minute promotional television special from 1997. It can still be found out there if you choose to seek it. If not, if it seems like overkill (even this edition is packed with bonus features; see below), then you'll likely be more than happy with the "new" Titanic - 10th Anniversary Edition. The choice is yours. 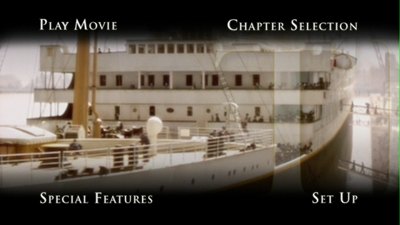 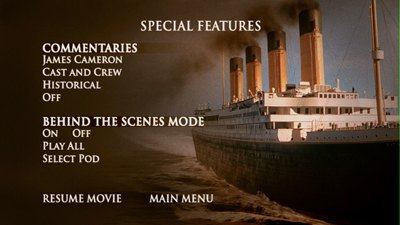 Video:
The Titanic - 10th Anniversary Edition splits the 194-minute movie across two discs, allowing for a better compression rate alongside the substantial extras included on each disc. The 1.66:1 transfer is pristine, showing the depth and detail of James Cameron's gigantic luxury liner.

Sound:
You have a variety of sound options to choose from. The English audio is mixed in 6.1 DTS and Dolby 5.1 and 2.0, while the French and Spanish dubs are also in 2.0. These match the video quality in terms of excellence.

There are also optional English subtitles.

Extras:
Titanic - 10th Anniversary Edition has a lot of supplements spread across both discs. There are a total of three commentaries to choose from, depending on your preferred poison:
1. James Cameron dissecting the making of the movie in exacting detail.
2. The cast and crew: actors Kate Winslet, Gloria Stuart, and Lewis Abernathy, and producers Jon Landau and Rae Sanchini. Or so you'd think if you look at the DVD box. In actuality, the commentary is much more sprawling, including actors Bill Paxton, Frances Fisher, Billy Zane, Jonathan Hyde, Danny Nucci, and Jason Barry; composer James Horner; second-until director Steve Quale; dive coordinator Ralph White; art director Martin Laing; Deborah Scott, costumes; choreographer and etiquette coach Lynn Hockney; Jimmy Muro, steadycam operator; audio mixer Gary Rydstrom; and others. Outside of Sanchini and Landau, I don't think any of the other people are in a room together. Subtitles helpfully inform you of who is speaking as they begin, because it's impossible to keep up with; unfortunately, if you choose to try to view the branching featurettes with this commentary, those identifying subtitles disappear.
3. Historians Don Lynch and Ken Marschall discussing the history behind the movie.

The discs also have a cornucopia of short documentary features, 61 in all, over 50 minutes in total running time. They begin with the motivation behind making the movie and end with the filming of the Celine Dion music video for the theme song. You can watch these one by one, using a "play all" function, or branched into the movie. As you watch the film, a sinking-ship icon will appear on the bottom of the screen at the appropriate time. Select it, and it takes you to the specific featurettes related to that moment, and then back to the movie. These are short but exhaustive little pieces, including new interviews, historical perspectives, rehearsal footage, and layer-by-layer looks at the visual effects shots.

Disc 2 also has the aforementioned Celine video for those looking to punish themselves, as well as a nine-minute extended ending that reflects Cameron's original script but that was cut to be more enigmatic. Cameron provides optional commentary for this section.

Again, these are all extras that were on the 2005 three-disc Titanic, and the third disc of deleted scenes and vintage TV specials is only available in the older set. We clear?

The two discs of the Titanic - 10th Anniversary Edition come in a regular-sized DVD case, but with a spot for a disc on both inside covers. It also has an outer slipcase.

FINAL THOUGHTS:
When you think about it, the DVD history of Titanic is a little like the social structure on the ship itself. The original 1999 bare-bones disc is third class, a.k.a. steerage, the cheap ticket with no accoutrements (though, not all that cheap if you do a price comparison). 2005's Three-Disc Special Collector's Edition is first class, the one with all the luxury and that gets tossed in the lifeboat first if you can only save one copy of the film. This makes Titanic - 10th Anniversary Edition somewhere in the middle. Though really just the 2005 version with the third disc of supplemental material dropped, it is a pretty good DVD release on its own. The movie holds up, and the technical aspects of the edition are strong. On its own merits, I'd bump it up a grade, but in light of what else is available, Recommended. 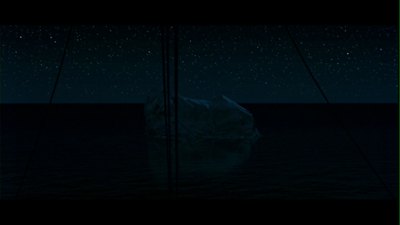