With his movie Lady in the Water, director/writer M. Night Shyamalan tried to create a new fairy tale, a modern fable that would capture the imaginations of viewers. He failed miserably, instead making a self-indulgent and muddled film that wasn't captivating and barely watchable. Writer/director Guillermo del Toro (Blade II, Hellboy) attempted a similar thing last year with Pan's Labyrinth and created a mystical, magical world that is both horrible and full of promise. Like many of the original Grimm's fairy tales, this is a dark tale with evil and cruelty and is not necessarily a story for children.

Ofelia (Ivana Baquero) is an 11-year old girl who, as the movie begins, is reluctantly moving to the mountains of Spain with her pregnant mother to be with her new step-father, Captain Vidal (Sergi López). The time is 1944, and the fascists have won the Spanish Civil War, but there are still some Communists rebels holding up in the mountains. It's Vidal's job to capture them, but he'd rather just slaughter them all. 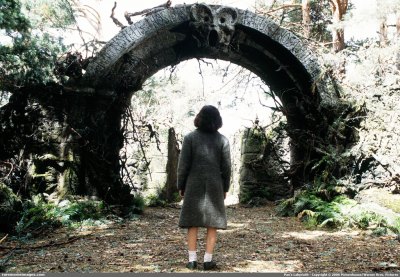 Thrust into a violent and unfamiliar world, Ofelia spends much of her time reading fairy tales, and when she sees a strange bug fly into her room and land on her leg, she's not terribly surprised to discover that it's really a fairy that has been sent to bring her into the forest. Following the small flying creature, Ofelia is lead through an ancient labyrinth and down into a deep well. At the bottom she meets a faun who reveals that she's not just an ordinary girl, but the daughter of a king. In order to be able to return to her kingdom however, the faun must be sure that Ofelia is pure and hasn't been tainted with the curse of mortality. In order to prove herself she has to accomplish three tasks before the next full moon, only days away. Each one is more dangerous than the last.

All the while Captain Vidal searches for the rebels, cutting the locals rations so they won't have any food to share and torturing or killing anyone he suspects of helping them. With Ofelia knowing that one of the maids is helping the resistance, and her mother's pregnancy taking a turn for the worse, the girl is left with no one to turn to and no one to help her. 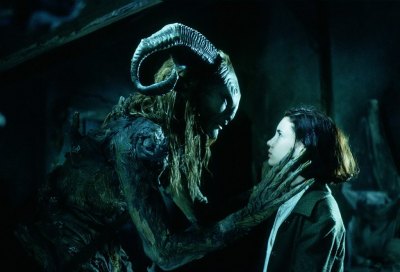 This movie does a magnificent job of weaving its two plot lines, that of Ofelia's reality and that of the world she hopes to escape to, together and making the whole greater than the sum of the two parts. Especially at the end, when the two worlds come crashing together, the film is at its strongest and most intense.

While the movie can be enjoyed at face value, but people who enjoy digging beneath the surface will find a lot here. Filled with allegories and clues that are open to varying interpretations, this is a film that can be talked about for hours on end. Of course the most basic question is what part is real? Is Ofelia's faun just in her imagination or has he really come to rescue her. The parallels between the fairy story line and the harsh real world are interesting too. No matter how horrific Ofelia's task, the anguish that man inflicts on his fellow man is much more intense. Then there's the imagery and visual cues hidden through the film, references to Greek mythology, and Christian religious motifs that will spawn many conversations.

The film is also technically superb. The cinematography is fabulous and is one of the main reasons that the film works so well. The Spanish hillsides look cold and forbidding and the labyrinth is has an earthy, ancient feeling that seems like it could be real. The acting is also top rate. Young Ivana Baquero is amazing, bringing just the right mixture of innocence and fear to the role, while Sergi López comes across as truly vile without becoming a caricature. 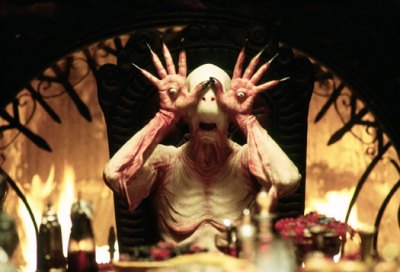 The only problem I had with the film was some aspects of the script. In a couple of places people's actions didn't ring true. (When the maid is leaving the storage barn, why didn't she finish the job first?) Also some things were a little too black and white. The fascists were evil, and history proves that out, but the communists they were fighting would likely have been just as bad. The rebels hiding in the mountains are portrayed as a bit too noble and selfless and that distracts from the realistic atmosphere the movie is trying to create. In the whole scheme of things, these are minor matters however, as the film works wonderfully as it is.

The video quality of this disc is simply stunning. I was really blown away by the look and atmosphere of the film and how well that was reproduced on this Blu-ray disc. From the very first scenes the disc is impressive with a tight, sharp picture and a wonderfully wide color palate that makes the film quite astonishing. The level of detail is excellent too. Viewers can see the fine texture on the fairies wings and the bark-like wrinkles on the faun's skin.

There are several distinct looks to this movie too, from the bright austere room of the Pale Man to the dark and earthy look of the bottom of the well to the realistic appearance of the command center where Ofelia's living, they all look wonderful. Blacks are solid and deep, the colors are nothing short of magnificent. From the Pale Man's pinkish-white skin to the Faun's grayish skin that has been weathered by age, the hues and tones used in the film are lovingly reproduced. This is an amazing film with a unique style and feel and this Blu-ray disc does a magnificent job of reproducing it.

The short version: One of the best soundtracks I've ever heard. The longer version: a totally immersive audio track, the DTS HD Master Audio 7.1 track (in the original Spanish with optional English subtitles translated and written by Guillermo del Toro himself) sounds phenomenal even when powering 5.1 speakers like my set up. The both the visual and aural designs of the film were made to draw the viewer into the world that Ofelia was living in, and this soundtrack was very successful in doing that. The entire soundstage is constantly being used and even the softest noises are carefully placed. Whether Ofelia is crawling through mud and bugs inside a dying tree or just lying with her mother in bed, there are sounds, subtle and overt, coming from all corners. And that's just during the regular scenes. When the action starts the speakers get a real workout, with bullets flying and explosions rattling the windows.

As impressive as the battle scenes are, I was more moved by the more sonically sedate scenes. Where the maid claws the dirt away from a cobblestone that hides her cache of letter to be passed on to the resistance for example, the scraping of her fingernails on the stone and her hurried breath create a very suspenseful scene. This is a case where the sound really enhances the atmosphere of the film. Hollywood should take note too: there wasn't any overbearing 'scary' music playing at the time, just the sound of someone breathing fast while digging up a stone.

Technically the disc was above reproach too. Due to the wide dynamic range, both the soft sounds and the loud booms were easily discernable. The bass was tight and the mids were warm sounding. There wasn't a hint of distortion or cracking either. An amazing soundtrack that is reference quality.

New Line has ported over the entire set of bonus items found on the SD version of the film, and though they are all presented in SD, it is a very comprehensive set of features that adds significantly to the value of the disc.

The disc starts out with a video prologue by director/writer Guillermo del Toro in which he talks about how much he put into the making of this movie and the sleepless nights that he endured. It only last a minute, but is a nice beginning.

There's also a director's commentary by del Toro. He provides a good track and it is very enjoyable to listen to, even though he has a bit of an accent. He talks about the production of the film and the cast, and points out some interesting details that many viewers probably missed (such as all the faun icons sprinkled through the film.) Though it sometimes gets a bit technical, this is still an enjoyable track and well worth listening to.

The Power of Myth is a 15 minute featurette that looks at fairy tales that inspired the movie. That's followed by Pan and the Fairies, a half hour look at the special effects of the movie and how they were created. This latter documentary was my favorite on the disc, a very enthralling look that the creation of the movie.

The Color and the Shape is a four-minute examination of the cinematography. The film has such an interesting and unique look that I found this featurette to be much too brief. The subject really deserved a longer and more in depth look. The same can be said of The Lullaby: The Melody Echoes the Fairy Tale. This examination of the music only lasted 5 minutes and could have gone on much longer.

One of the best bonus items on this disc is an installment of the Charlie Rose Show. This 50-minute program has a discussion between directors Guillermo del Toro, Alfonso Cuaron (Children of Men), and Alejandro Inarritu (21 Grams) which is very interesting and well done.

The Director's Notebook is a set of short interview pieces accessed through an interactive notebook. While some of the subjects were interesting I found the method of accessing them a bit gimmicky.

The Storyboard Comparisons last 6-minutes and presents del Toro's original drawings, the actual storyboards, and the scene from the film all on the same screen. There's also a VFX Plate Comparison which has a light test for one of the fairies, four short comic book stories, a photo gallery, and an extensive collection of trailers, TV spots, and promotional posters for the film.

In addition to all of that, there is an Enhanced Visual Commentary with del Toro, exclusive to the Blu-ray and HD DVD versions of the film. This is a Picture-in-Picture track that takes clips from the documentaries already on the disc and plays them in a window while the film is running. I found this rather annoying and not really worth the trouble they obviously went to. NOTE: This is not a Profile 1.1 feature and should run on virtually all Blu-ray players.

This bonus section has A LOT of stuff in it, and just about all of it is interesting and worth watching. A really top-notch group of extras.

Filled with wonderful images, a well thought out story, and some absolutely superb acting, Pan's Labyrinth is a work of art. This story of a young girl growing up in bad times is sure to stay with viewers long after the movie is over. The Blu-ray presentation is excellent with a great picture and one of the best audio presentations I've heard. Ever. Add to that a wonderfully full selection of bonus items and the result is a don't-miss disc. DVDTalk Collector Series.