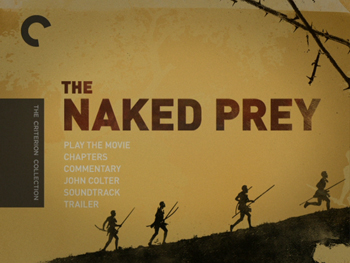 When I was a boy, I read a lot of survival stories intended for young men, tales that were meant to show the thrill of exploration and adventure while also showing the often-harrowing consequences of such adventure. There were a variety of frontiers and timeframes that were regularly covered, with the most common being the colonizing of the Americas and Manifest Destiny, frozen tundras, rainforests, and mountain climbing. Jack London is probably the shining example of this tradition, with his narratives of rugged men in harsh environments and how they managed to adapt. London's identification with nature was so strong that many of his stories crossed from being about the men to the animals themselves.

Cornel Wilde's 1966 film The Naked Prey feels like one of those old adventure stories for me. Set in Africa in the nineteenth century, it's a tale of a jungle safari gone wrong, a downward slope of events predicated on an imperialist's lack of respect for the people or the land he is invading. Wilde plays "Man," the manager of an ivory expedition who is stuck guiding a ruthless capitalist (Gert Van Den Bergh) who wants things done his way or not at all. When the group happens upon elephants, he fires his gun indiscriminately, not caring whether the target actually has ivory tusks to offer or not. Likewise, when the safari meets a welcoming party from the tribesmen who actually live on the land they are hunting, the financier refuses to pay tribute to their king (Morrison Gampu).

This second slight proves to be the company's downfall. The tribesmen return, lead by a determined warrior (Ken Gampu), and take the men their prisoner. As restitution, they take the lives of the hunting party in brutal, torturous manners, letting the entire tribe participate and performing the acts of cruelty as entertainment for the king. Wilde is saved for the final sport, stripped of his clothing and forced to run for his life. The bulk of The Naked Prey is this chase, with Wilde's representative Man barely staying ahead of his pursuers, living by his wits and fighting to stay alive.

The Naked Prey is based on the real-life encounter of an American trapper being pursued by Blackfoot Indians after insulting them in a similar fashion. I can't attest to the accuracy of the story once it has been transplanted to Africa, but Wilde does strive for a sense of unflinching realism in The Naked Prey. Though the picture looks like a Wonderful World of Disney production at its start, it's not long before we realize that this has not been sanitized for Sunday night television viewing. The violence that man inflicts upon man in this movie is quite extreme. Though 1966 standards forced Wilde to keep a lot of the bloodshed off screen, there is never any question about what is actually happening. The actor/director/producer also uses the animal inhabitants of the African jungle as both a counterpoint to show the inhumanity of the situation and as a realistic reminder that the jungle is neither a forgiving nor an easy place to survive. In fact, survival is the only true imperative. You're either predator or prey.

To show this, Wilde not only shot his film in South Africa, but he uses real footage of animals being hunted and killed, as well as photographing jungle predators killing and feasting on smaller animals. It's not footage for the squeamish, but without it, The Naked Prey would seem a lot less plausible. 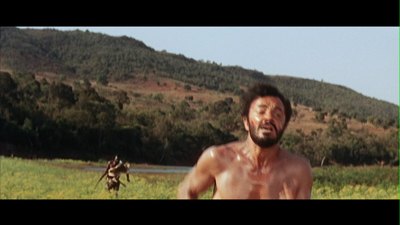 Naturally, by modern standards, we could lean toward judging The Naked Prey more harshly for its depiction of the noble white hunter running afoul of evil black savages. I think, however, that would be unfair to Cornell Wilde. If this were his intention, there are a lot of other choices he could have made in making the movie. It would have been cheaper, for instance, to shoot on a backlot using traditional Hollywood actors rather than traveling to Africa and using African actors. He also had ethnomusicologist Andrew Tracey recreate African music and employ field recordings when scoring the picture.

Even beyond that, however, I don't feel it was Wilde's intention to portray the indigenous people as ignorant savages. He doesn't show them as sadistic or maniacal the way Mel Gibson did, for instance, in Apocalypto, a film that owes a heavy debt to The Naked Prey. On the contrary, it's the white hunters who prove themselves to be far less "civilized" than they think they are. The leader of the safari--whom Wilde works hard to distinguish in attitude and demeanor from "Man"--not only wants to pillage the land for its ivory, but when he is through, he's thinking of joining the slave trade. It's his self-serving behavior and his inability to respect the local customs that causes the trouble, so Wilde is clearly progressive enough not to see the whites as victims of anything other than their own hubris.

I also think that it would be wrong to say that the hunt causes Wilde's character to become less civilized, to become less like a man and more like a beast. Maybe he becomes less "domesticated," more primal. The African tribes are a civilization, too, it's just a matter of the outer trappings and the conveniences available separating one society from another. The plight of Man is survival, and that means staying alive in the harsher environment, finding sustenance and avoiding more natural threats, not just staying ahead of his pursuers. It seems to be Wilde's intention to say that Man can get through anything as long as he manages to maintain some level of dignity and compassion. Thus, after slavers attack a village, Man saves a little girl (Bella Randles) and then she returns the favor. Individuals looking out for one another, and in turn learning from each other.

In the end, too, Wilde reminds us that the tribesman also have their dignity, that they are still people, their code is just different than ours. The last look exchanged between Man and Ken Gampu is one of respect. Not only does the warrior respect the white man for outrunning him, but he also finally gets the respect he was not given at the start of the picture. In its way, The Naked Prey is showing that the last vestige of any human is to stand tall in the face of hardship.

Which is what I think all of those adventure stories of my youth also were trying to teach me. I am not ever likely to shoot an elephant, nor am I probably even going to visit Mt. Everest, much less try to climb it; nevertheless, there is something to be learned from those who do, even when their exploits might be exaggerated for the sake of entertainment. Because regardless of what political baggage The Naked Prey may arrive with, its main intention is still to get our hearts racing and to fire up our imaginations. On that front, there is no debate: The Naked Prey can still keep up the pace. 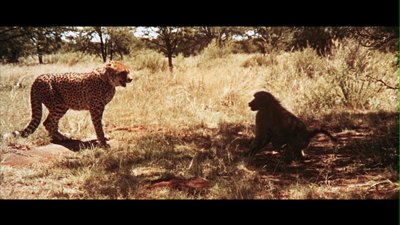 Video:
For this Criterion edition, The Naked Prey has a newly restored 2.35:1 anamorphic widescreen transfer. The image is clean and the colors nicely rendered (that is some very red blood!). I noticed the picture go a little soft at times, but it's the sort of thing you have to keep your eye out for and not something you will notice during casual viewing.

Sound:
The original English soundtrack is mixed on a straightforward monoaural track. The sound levels are nicely done without distortion or audio glitches. I watched the film turned up pretty loud, and it sounded very crisp. There isn't a lot of dialogue, so it's good that there is no extraneous hiss when people aren't talking, just the sound of the natural atmosphere and original musical score.

Extras:
There are several extra features on The Naked Prey - Criterion Collection, the most extensive of which is the full-length critical commentary by film historian Stephen Prince, author of Savage Cinema. Prince covers a variety of topics, including how the film was made, in terms of location, construction, and motivation. He covers filmmaking techniques, as well as African history, movie history, and the political climate of the 1960s, which may have fueled what can be perceived as The Naked Prey's progressive message. In some instances, Prince refers to the short continuity script to elaborate on some of the communication that occurs between the African tribesman, which is not translated for the viewer. He is not a complete apologist for Wilde, however, but is willing to indicate where Cornel Wilde and Hollywood convention got it wrong.

Outside of the original theatrical trailer, the other extras are mainly audio, as well. For one, "John Colter's Escape," Paul Giametti reads the real-life account of the trapper who was pursued by Blackfoot Indians in 1806, the original inspiration for The Naked Prey. Lasting about five minutes, the reading is illustrated by maps of the locations Colter and his trapping partner traveled and vintage drawings of the story.

For the other extra, the film's musical director, Andrew Tracey, provides a text introduction explaining how he became involved with the production and how the music was recorded. Then, you can listen to eighteen isolated musical selections from the soundtrack, free of dialogue or other sound effects.

A 32-page color booklet features photos, a chapter listing, and movie credits, alongside two essays: a new article on the movie by writer Michael Atkinson and excerpts from a 1970 article about Cornel Wilde that includes discussion of The Naked Prey. Atkinson makes convincing comparisons between the work of Wilde and Samuel Fuller, so I'm surprised there was no mention of the similar story Fuller told in Run of the Arrow.

FINAL THOUGHTS:
The Naked Prey - Criterion Collection is an interesting artifact from the 1960s, when a pioneering director/star tried to make something different, taking advantage of less strict production codes to tell a violent adventure story with sociological underpinnings. Cornell Wilde plays a hunter in 19th-century Africa whose safari insults the tribe of men on whose land they hunt, and as the last survivor of his expedition, he finds himself running for his life. Shooting on location and cutting in actual footage of jungle life, Wilde gives us a brutal, pulse-pounding story about survival that plays like a classic frontier narrative. Complete with bonus features that elaborate on the context in which the movie was made, The Naked Prey - Criterion Collection is Highly Recommended. 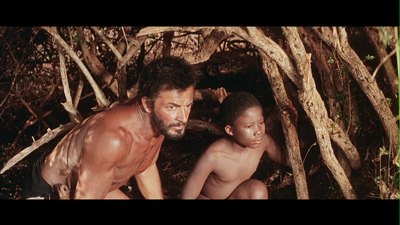