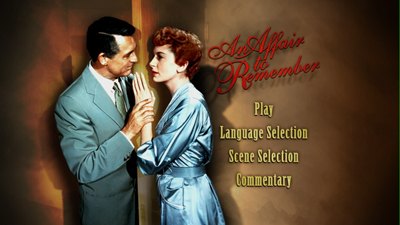 This one is for the saps. And I say that as a card-carrying member, who types this with eyes still glassy from watching the new 50th Anniversary DVD of An Affair to Remember. It's a sappy movie, and it doesn't get any less sappy with age. Though, I must say, I think the older I get, the more I like it. I don't know if I am gathering a greater capacity for cheesy emotion instead of wisdom as I trundle on into the autumn of my years, but it's possible.

Immortalized as the ultimate chick flick in Nora Ephron's Sleepless in Seattle, this 1957 movie from writer/director Leo McCarey (The Awful Truth) is apparently not supposed to appeal to members of my gender, but frankly, boys could learn an awful lot from Cary Grant's masculine example in this film. Grant plays Nickie Ferrante, last of the famous international playboys. When Nickie boards a transatlantic cruise to meet his fiancée (Neva Patterson) in New York, it makes the news programs around the world. Could the notorious gadabout really be settling down? Certainly his future wife's multimillion-dollar fortune is enticement even if love is not.

On the trip, Nickie meets Terry McKay (Deborah Kerr), a former nightclub singer also sailing to meet her fiancé (Richard Denning). Terry is devoted to the man who took her out of smoky bars in order to make her a proper woman, and so she easily rebuffs Nickie's charms. It's a new experience for him, and the lothario is flummoxed. The chemistry that exists between these two is one unlike anything they've felt before, and no matter how much they try to pull apart, they always end up right back together. After a sidetrip to meet Nickie's adoring grandmother (Cathleen Nesbitt) during a port stop, the two can't deny it any longer. They also can't deny that they are in a sticky situation as far as their mutual engagements, so they make a plan to take six months to disengage. Nickie, in particular, is going to break away from the old ways, take a shot at reviving his artistic aspirations and being a painter, and prove he can make his way in the world in order to be deserving of Terry's hand.

The pact the pair makes is the one Ephron famously borrowed for her Tom Hanks/Meg Ryan vehicle. In six months, at 5 p.m., if they are successful in their endeavors, Nickie and Terry will meet each other at the top of the Empire State Building and then go to be married. It takes approximately half of the movie to get to the point where the deal is struck, a seemingly lopsided structural decision, but one that is integral to making An Affair to Remember more than your typical sudsy romance. 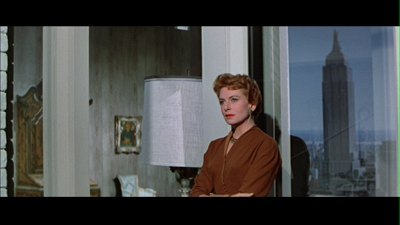 In the first hour of the movie, Nickie and Terry really fall in love. I am not sure I fully appreciated how real their interactions on the ship come off in any of my prior viewings (and it's certainly something my esteemed colleague missed in his review of the previous 2002 DVD of An Affair to Remember). McCarey doesn't go for any of the obvious tricks in bringing his lovers together, instead he exercises tremendous restraint. The whole of An Affair to Remember has an air of calm, and in that calm, McCarey is able to foment feelings of desire, longing, and eventually sadness just by letting the actors be themselves. Cary Grant and Deborah Kerr reportedly improvised a lot of their dialogue in the courtship scenes, and it shows. At times, they seem genuinely surprised at the things that come out of each other's mouth, and the natural interchange between the two makes for honest romantic yearning. You're not just going to believe they are in love with each other, but that they actually like one another, as well.

McCarey maintains this restraint through the entire picture, even when it would have been easy to go for the emotional jugular. The meeting at the Empire State Building doesn't go off as planned, for reasons I won't get into for those who may have never seen An Affair to Remember before. Suffice to say, there is plenty of pain and misunderstanding, and even though the audience is privy to more information than Nickie, there are some things that McCarey teases out slowly. The big revelation of how bad off Terry really is, in particular, could have been handled with far more fanfare. McCarey doesn't even turn up the score, letting the moment come silently, and cutting away as soon as he's sure we've figured it out. Clumsier films would have lingered, tried to tug our heartstrings with excessive force.

Instead, the director saves his biggest moments for the final scene, which itself is still played very carefully, isolated to one room, without the actors raising their voices or explaining too much. A heartfelt look will do far more than false words ever can, and the devastation on Cary Grant's face when the reality of the situation becomes clear is easily one of the actor's finest moments. It's when the tears hit my eyes, that's for sure.

So, call me a sap, I don't care. I've never been a closeted romantic, anyway. An Affair to Remember has outlasted all the scoffing it's gotten from the likes of you in the past, and it's gonna keep truckin' long after both of us have shuffled off this mortal coil. Maybe one day you'll wise up, and like Nickie Ferrante at the end of the movie, realize what a stinker you've been.

Then again, maybe not. Just because I'm a romantic doesn't mean I'm not also a realist. 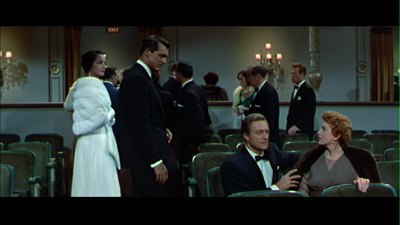 Video:
The 50th Anniversary Edition of An Affair to Remember is not the first time the movie has been on DVD. Fox released the movie in 2002 as the fourth in their Studio Classics line. That disc was a pretty solid release, with a nicely rendered 2.25:1 anamorphic picture. There was little to complain about in the very colorful image, and though I haven't done a total scene-by-scene comparison, they look pretty much the same to me. So, either, it's the same source file mastered to a new disc, or if it's a new job completely, they didn't have to go very far. Compare these scenes: 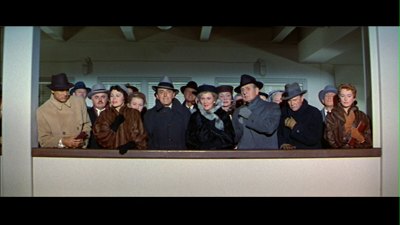 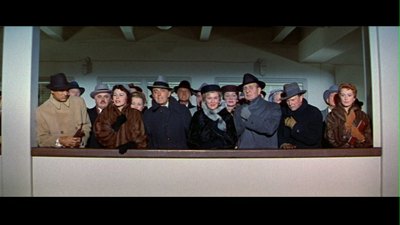 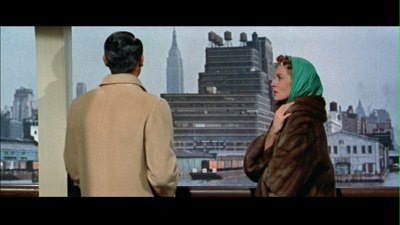 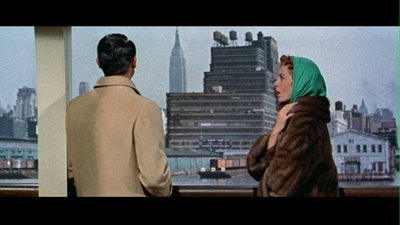 If there is any difference, it's that the newer disc may be slightly brighter, such as the color on Cary Grant's jacket in the snap with the two of them. At times, the image did look a little overly rendered, with the color gaining some grain, but these were isolated incidents.

Sound:
A host of sound options, including stereo English and French soundtracks, and a mono Spanish track. There are also subtitles in English and Spanish, as well as Closed Captioning. Again, these are the same specs as the 2002 disc, and the audio rendering is very good, not overdoing it but preserving the original sound quality.

Extras:
One big difference between the old An Affair to Remember and the 2008 An Affair to Remember - 50th Anniversary Edition is that the prior release was a single DVD, while the new one has two discs. There are a ton of extras, but at least 2/3 of them are carry-overs from the previous edition. Given that the technical specs of the movie are the same, this area is likely what might put consumers over the top when it comes to deciding on whether they should double-dip. I am going to have to declare a stalemate here. I don't think that the extras are sufficient enough to demand that collectors rush out to upgrade, but if you love this movie a whole lot, you may want to give it some consideration.

Carried over from 2002 are the following extras:
* Audio commentary with singer Marnie Nixon (who dubbed Deborah Kerr's singing voice) and film historian Joseph McBride. This is the only bonus on DVD 1. It's a good track, with Nixon in particular talking about a job we don't hear about that often.
* "AMC Backstory," a twenty-five minute program about the movie from the excellent series that used to run on the AMC cable channel before they became the station where modern movie sequels go to die.
* Fox Movietone News coverage of the premiere of the movie, dug out of the vaults and lasting around a minute.
* The original theatrical trailer.
* Poster and stills galleries.

These documentaries aren't exclusively An Affair to Remember-centric. The two actor-focused pieces are entirely about their major relationships and are built on interviews with the spouses that survived them. The Leo McCarey program is about the director's life and career, with just a pitstop to An Affair to Remember, with interviews from film scholars, including Peter Bogdanovich--the same folks who discuss the style of the movie in the last documentary. The Wald featurette is similar, but more personal, gathering interviews with his sons, brother, and widow.

The two DVDs come in a standard-sized DVD case with a hinged double tray on the inside and an outer cardboard sleeve that slips over it. In addition to the discs, the inside of the case holds a paper insert with liner notes about the movie and an envelope containing four black-and-white postcard reproductions of lobby cards from the movie's original release.

It's too bad they couldn't have included McCarey's original version of the movie, Love Affair, but oh, well....

FINAL THOUGHTS:
Yes, this is a double-dip, and only a partial upgrade in terms of what you get, but the An Affair to Remember - 50th Anniversary Edition is a strong enough product to warrant being Highly Recommended. The movie is a classic romance, with a convincing relationship between two characters played with considerable charm by Cary Grant and Deborah Kerr. Though it is extremely melodramatic, An Affair to Remember comes by its sentiments honestly. The laughs are real, and so are the tears. The extras in the 2-DVD set enhance the viewing experience, making it a solid buy. 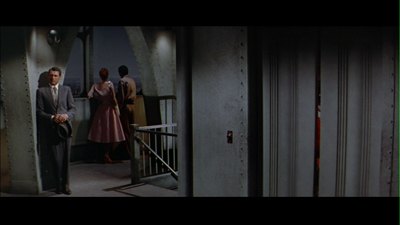