BBC Worldwide // Unrated // January 22, 2008
List Price: $79.98 [Buy now and save at Amazon]
Review by Stuart Galbraith IV | posted January 11, 2008 | E-mail the Author
Torchwood (2006), about a secretive branch of British Intelligence charged with battling alien invaders and salvaging their technology for use against future invasions, is a spin-off series first introduced during the revived Doctor Who's second year. The entertaining but flawed show basically combines elements of that program with stories and a tone reminiscent of The X-Files, unfortunately repeating many of the same flaws that began creeping into Doctor Who the year before.

The runaway success of the re-imagined Doctor Who led, er, torch-bearer Russell T. Davies to revisit an old, abandoned project that eventually became Torchwood, as well as create a second Doctor Who spin-off, The Sarah Jane Adventures, which premiered in January 2007. This and myriad ancillary projects doubtlessly has kept him obscenely busy and, arguably, spread his considerable talents a bit thin. 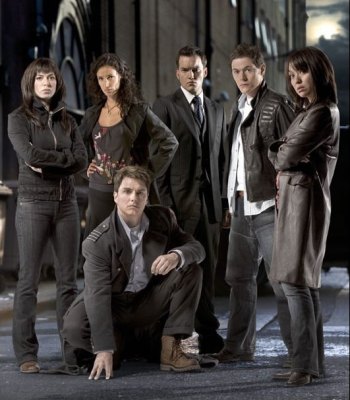 This reviewer confesses a marked dissatisfaction with Doctor Who's second series. As many of these faults that have been carried over into Torchwood, it's worth going into a little bit of detail here. After an exhilarating first series of highly original, supremely inventive shows and a splendid performance by Christopher Eccelston as The Doctor, one that seemed to combine the best elements of his many predecessors while adding his own original eccentric stamp on the character, the show's second series was one of tired referencing and repetition, including David Tennant's energetic but largely derivative portrayal.

Worse, the show began to move in directions this reviewer found much less palatable, so much so that instead of rushing through the season with barely-contained excitement, as I did with the first boxed set, instead I kept putting off watching some of the late-season shows. Where the first series reentered the world of Doctor Who with a profound sense of wonder at the universe and its myriad alien life forms and cultures, the second year - generally, and specifically with The Doctor himself - adopted a jaded, flip attitude toward alien worlds and new technologies closer in spirit to the original series' Tom Baker years, but perhaps more directly surfeit, cynical Hollywood blockbusters like Armageddon, Independence Day, and the Spielberg War of the Worlds.

The first season of the new Doctor Who had a real sense of wonder; his earthly companion, Rose (Billie Piper), was awed by the fantastic worlds introduced to her by The Doctor; her experiences were our experiences in a way that harked backed to the earliest days of the original series. In the second year, The Doctor and Rose became much too facetious, (at least initially) treating time-tripping alien encounters like a big, private joke.

This is not to say Doctor Who should be humorless; indeed, the first series was pretty much equal parts of comedy and sci-fi / horror suspense. But personally I find this attitude common to most filmed science fiction of the past 15 years or so singularly unattractive. Armageddon and Independence Day are truly terrible movies, no matter their popularity, partly because of this same jaded approach.

The Tom Baker years (1974-1981) were similar in tone, but also clearly fantasies in a way the new Doctor Who is not. Though Tom Baker is an excellent actor and his interpretation of the character was among the most memorable, the show's move toward a Hitchhiker's Guide to the Galaxy style (some of the teleplays were in fact written by Hitchhiker's Douglas Adams) they didn't really work. Tennant has neither Baker's engaging, natural eccentricity nor his innate gravitas, but more to the point, in the years since the technological leaps that have been made in the field of special effects have inescapably given shows like Doctor Who and Torchwood an entirely different feel, even with similar material.

The dark humor of the Baker Doctor Who's has been blackened even further by the photo-realistic capabilities of CGI and advanced special makeup effects, coupled with far more lenient broadcast standards. On the original series, the quaintness of the special effects and the low budget necessitated a suspension of disbelief, but on the new show alien monsters eviscerate their human victims all too realistically.

Torchwood has the same problems, though its writing staff at least seems to be aware of this, judging by the way it sort of grapples with these issues over the course of the first series. "Separate from the government, outside the police, and beyond the United Nations," the Torchwood Institute is a semi-rogue agency, with the series set at its Cardiff branch ("Torchwood Three"), near a rift in the space-time continuum. There, Welsh police constable Gwen Cooper (Eve Myles) stumbles upon Torchwood and its fantastic secret laboratory/headquarters where eventually she's invited to join the team, partly to act as a liaison with the police.

The Cardiff branch is headed by Captain Jack Harkness (Jack Barrowman), an immortal - and unapologetically homosexual* - former con man / time traveler from the 51st century, though the rest of the Torchwood team are unaware of this. Also on board are second-in-command Dr. Owen Harper (Burn Gorman), computer specialist Toshiko Sato (Naoko Mori), and jack-of-all-trades Ianto Jones (Gareth David-Lloyd).

Beyond the standard X-Files-style alien investigations which, because of Harkness's character, also resemble an earthbound (though sometimes time-traveling) Doctor Who, the crux of the drama is Gwen's conflicting relationship with the rest of the Torchwood staff. The intense nature of their alien investigations, their seclusion in the bowels of Torchwood's secret underground facility, have made the others both over-confident in their ability to manage and control the sudden influx of advanced alien technology, and their adrenalin-driven rush to use said technology, sometimes surreptitiously for personal use - threatens to rob them of their humanity. In the premiere episode, one member of the Torchwood staff is discovered murdering ordinary citizens at random to test an alien glove that temporarily revives the dead, while in the next episode the victim of an alien possession is treated with all the respect of a lab rat, until Gwen steps in to humanize her.

Eve Myles, who guested on Doctor Who in a different role, is a real find as Gwen, and she makes a nice contrast to the sassier, working-class shop assistant Rose in Doctor Who, in what functionality-wise is the same basic role. The rest of the cast is all well above average, but the issues that reared themselves in Doctor Who's second year likewise present themselves here.

The show seems to want to have it both ways: the seen-it-all, casual and jaded characters and jet-black, flippant humor balanced by Gwen's humane audience-surrogate. The former, coupled with an annoying, short-attention-span-theatre visual style, comes off as so much pandering to the equally jaded youth audience it covets. Gwen is so appealing (and Myles is so good) that she just about anchors the show, compensating for its shortcomings, but only just.

The other issue, again acknowledged in the writing, is the post-9/11 attitude toward Torchwood itself, which borders on the distasteful. A government-sanctioned organization designed to protect Britain from unspecified invaders, it has no oversight and seemingly limitless, unquestioned authority, and thus very much a science fictiony outgrowth of the Bush/Blair legacy. The pandering to this government-driven paranoia is perhaps less extreme than, say, Fox's 24, but it's there. It doesn't explicitly liken the grotesque alien invaders to Muslim extremists, but lines like "it all changes in the 21st century," invite such readings.

That the show is even more explicit than its predecessor also comes off as cheap; the second show features an alien that feeds off sexual orgasms, allowing for some sex scenes that come off like fanboy porn. Davies himself has said, "We can be a bit more visceral, more violent, and more sexual, if we want to. Though bear in mind that it's very teenage to indulge yourself in blood and gore, and Torchwood is going to be smarter than that." Torchwood is smarter than that (and, for that matter, 24 is smarter than that, too), hence the disappointment. The writers, the actors, and the technical staff are too talented to be pulling the show down to what some have described, not necessarily in a complementary way, as "Doctor Who for adults."

(We weren't sent final product, so please note that video/audio specs and extras are subject to change.)

Torchwood's first series is spread over seven single-sided, dual-layer discs in 16:9 enhanced format. The image is okay, though one wonders if the show, filmed in HDTV, has been down-converted to PAL and then transferred to NTSC from a PAL source; the image is at times softer and more artifacty that it seems it should, though overall is okay. The audio isn't identified anywhere on the check discs we received, but appears to be a Dolby Digital 5.1 mix that throbs with the show's pounding score and myriad sound effects. Optional subtitles are available.

One complaint is the endless repetition of Torchwood's theme music throughout the menu options, and the menus themselves are both rudimentary and occasionally confusing, especially when trying to navigate through all the extra features.

As with all of the BBC's Doctor Who releases of recent years, Torchwood is positively crammed with supplements, about three hours' worth not counting the audio commentaries that are included with each of the 13 episodes. The commentaries include a wide mix of talent: producers, writers, actors, etc., though as with the new Doctor Who a less casual approach with an outside moderator would have been preferred.

Disc Seven includes Torchwood Declassified, 14 mini-featurettes running about 10 minutes apiece, while spread across the other six discs are other making-of shorts. Some run about 15 minutes and focus on particular production/writing aspects of the program (with much material repeated from Torchwood Declassified, while others running an average of five minutes or so concentrate on specific episodes. All of this material is also 16:9 enhanced. This being a brand-new series, seemingly every aspect of the production (including a read-through of the pilot episode) is exhaustively documented, though it's unlikely anyone other than the most extreme die-hard fans will have the patience to sit through it all. These featurettes, like the series itself, are very well made and impressively detailed, but also generally uncritical and oftentimes play like softball promotional material rather than hard-hitting documentaries.

Complaints aside, Torchwood is a handsomely produced show, done with intelligence even if it generally comes off as unoriginal and sometimes pandering to the 16-24 crowd more than older adults. The shows are consistently entertaining, but it also could be a much better program than it is. Still, for genre fans it's Recommended.