Wire - The Complete Fourth Season, The 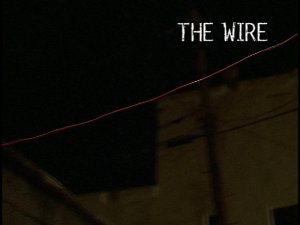 HBO's hit television crime drama The Wire is an intense show. The first three seasons were amazing and its fourth is no exception. Season four continues to offer the same high quality of entertainment with topnotch writing, engaging storylines, riveting characters, and intense drama. For those unfamiliar with the series, it is based in Baltimore, Maryland and looks at the Baltimore Police Department's (BPD) major crimes unit using wiretaps and pen registers to unravel the complex ties of the local drug trade. One of the show's strengths is its ability to go beyond the common cop show, as The Wire expands into additional territory and has a variety of multi-faceted characters. For more details about this amazing series, refer to DVD Talk's reviews of season one, season two, and season three.

In The Wire's fourth season, the BPD's major crimes unit is still going strong. Having recently put Barksdale drug empire six feet under, Marlo's crew has only increased in control of the Baltimore drug trade. Marlo and his crew are a major storyline throughout the season, as everyone is baffled how to put an end to his reign of terror. Marlo operates with guile and makes it difficult to associate drugs or bodies to him. His heavy hitters Chris and Snoop have a near-foolproof method of making bodies disappear. To make matters worse, the major crimes unit is given a wrong end of the stick when local politics come into play.

Local politics are also a big development and not something found in other shows in the genre. Baltimore Mayor Royce is up for reelection, but his opponent Tommy Carcetti gives him a run for his money. This development plays a huge role, as Royce has Police Commissioner Burrell manipulate investigations to support his political agenda. Of course, it blows up in his face and becomes a big issue in his reelection. These developments are also pretty fascinating as they visit past characters Daniels, Greggs, Freamon, Pearlman, Herc, and Sydnor. There is also a very plotline that follows Carcetti's political campaign, which started out as a lost cause.

Another major focus this season deals with the school system and a group of grade school kids: Michael, Namond, Randy, and Dukie. The problems of the local school system are detailed in two ways. First, Prez joins a local elementary school as a math teacher. He understands the problems the kids face on the street and struggles to comprehend that it is the same in the classroom. He attempts to do right and goes against policy to get them to learn. Former BPD Major Colvin is also involved in the school system. He joins a special research group that launches a pilot program to study a group of troubled students -- those who are destined for lives on the corners.

As for the four kids Michael, Namond, Randy, and Dukie, they have significant roles. Michael's mother is a drug addict and he is forced to care for his younger brother. As the season progresses, Michael gets involved in Marlo's world. Chris recruits him to be an enforcer. Namond is the son of Wee Bey, former Barksdale enforcer. With the collapse of the Barksdale drug empire, he is forced to the street by his mother to become like his father, a strong player in the drug trade. However, Namond doesn't quite have it in him. Randy does not have parents and lives in a foster home. He is a good kid and tries to do right. However, after being involved in a murder, his life takes a turn for the worse. He also develops a close relationship with Carver. Dukie is another kid from a troubled home. He means well, but as life's opportunity would have it, he moves towards a life of crime. Prez gets very close to him and tries hard to better his situation.

The season has other developments such as Cutty trying to reach out to Michael, McNulty's relationship with Beadie, Bubbles trying to keep a young boy off the corners, Omar hunting Marlo, Proposition Joe manipulating Marlo to join his drug co-op, and more. All in all, the various developments tie in together to offer a cadre of engaging storylines with a great set of characters. The only real shame is McNulty's limited role, as he only makes brief appearances in each episode.

Overall, The Wire's fourth season is another great collection of episodes. Despite that the season has a lot going on with a large ensemble cast, the storyline transitions and character developments are handled well with high quality writing and superb acting. Bottom-line, this season is must-see TV. 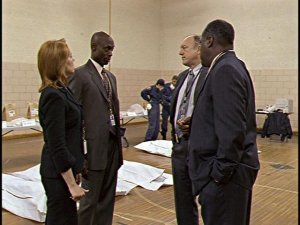 1. Boys of Summer: Four boys -- Michael, Namond, Randy and Dukie -- play out their summer vacation in the streets as the fall school semester approaches. Meanwhile, Marlo has solved the problem that baffled Stringer Bell: how to maintain discipline -- aka murder -- without bringing police attention.
2. Soft Eyes: Herc's soft-duty job with the mayor takes an unexpectedly hard turn. Pearlman provides Freamon and Sydnor with subpoena ammunition for their city hall hunt. Namond gets some grooming advice from his father, Wee-Bey.
3. Home Rooms: With his lead dwindling in the polls, Royce resorts to extreme measures. At Bodie's corner, Michael proves adept as a runner, with both Bodie and Marlo taking notice. The detail gets a new boss and agenda.
4. Refugees: With Freamon and Greggs moved to Homicide, Herc and Dozerman join Marimow in the stripped-down Major Crimes Unit. Cutty gets a "custodial" job at Tilghman school mopping up truants.
5. Alliances: The ensuing negative attention turns Royce against Burrell, who takes the heat while Rawls comes to the rescue. At school, Prez's reward/punishment program meets with mixed results.
6. Margin of Error: Carcetti wrangles for votes as he responds to a potentially devastating smear. Norris and Greggs get a lead on the Braddock case, but end up being detoured. Omar is fingered for murder, but McNulty and Bunk suspect a frame.
7. Unto Others: Royce and Carcetti make their peace, and contemplate their respective futures. At school, Prez "tricks" his students into learning math and Namond finds that the old rules no longer apply.
8. Corner Boys: To monitor the pulse on the street, Carcetti makes the rounds with members of the force. While Proposition Joe shows off his vocal range, Chris shows Snoop how to expose, and dispose of, New York infiltrators.
9. Know Your Place: Poot returns to the corner after a stint in prison -- and is welcomed back by Herc and Dozerman. Bubbles fingers a witness for Herc, but the detective is slow to return the favor.
10. Misgivings: Acting on Clay Davis's advice, Burrell seeks to burnish his reputation by ordering the department to double the number of street arrests. As the weather turns cold, school officials turn up the heat in Prez's classroom.
11. A New Day: After flexing his muscles around the city, Carcetti faces his first dilemma when a group of ministers protests Herc's mistreatment of one of their own. Randy gets the cold shoulder at school.
12. That's Got His Own: On the trail of missing bodies, Freamon turns to a higher authority after being rebuked by Landsman. Colvin approaches a pair of familiar faces to keep his experimental class funded.
13. Final Grades: As the bodies from the vacants pile up, Burrell offers his support to Daniels, while admonishing Rawls for crossing him. Namond, Randy and Dukie adjust to new realities. Marlo gives Michael new responsibilities on an old corner. 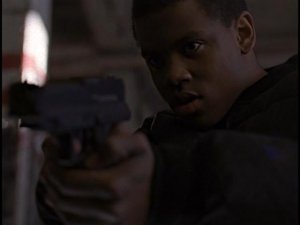 Video
The video is given in 1.33:1 ratio full frame color format. The picture quality is pretty good, albeit there is noticeable grain and dirt. However, it should not interfere with your viewing experience.

Audio
The audio in this release is given in English 5.1 Dolby digital surround sound. There are also additional tracks in French and Spanish 2.0 Dolby digital stereo sound. Overall, the sound quality is very good, providing an audible and clean audio track. The 5.1 track sounds great, with the majority of activity in the forward channels. Music and sound effects sound very rich and vibrant. There are also subtitles in English, French, and Spanish. 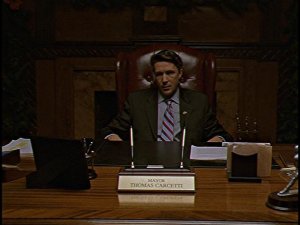 Final Thoughts The Wire is a television crime drama that goes beyond police investigations and courtroom procedurals. Since its first season, the series has captured the attention of viewers with its intense and complex storylines that develop characters on both sides: police and criminals. The show also touches upon areas not usually found in cop dramas. In particular, this season focuses on the local politics and the corruption of the school system. The result is a fascinating drama that does not fail to entertain. The Wire's fourth season is television at its best and something everyone must see.