The obscure-sport comedy film seems to have run its course.  Dodgeball was funny and Blades of Glory was okay at best, but last year's Balls of Fury was just a disappointment.  Not only does this film borrow its idea from those earlier films, but it's also a parody of Enter the Dragon.  How many times have we seen that done?  Though it starts off promising, the movie is soon gets mired in unfunny jokes and people being kicked in the crotch. 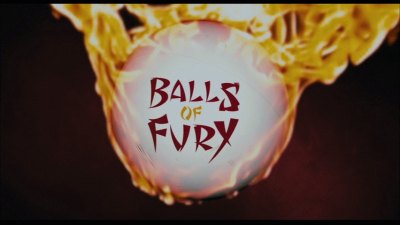 Flash forward a number of years.  Randy Daytona (Dan Fogler) was once a ping pong superstar, but now he's an overweight has-been working as the lunchtime entertainment at a buffet restaurant in Reno.  FBI agent Ernie Rodriquez (George Lopez) approaches Daytona and informs him that Feng (Christopher Walken), the man who murdered Daytona's father, is holding a ping pong tournament at his secret hideout that's filled with the best players in the world.  The FBI wants Daytona to enter so that he and Rodriquez can get evidence of Feng's criminal activity.

Daytona reluctantly agrees but first he has to hone his skills.  Rodriquez takes him to Master Wong (James Hong) a blind ping pong master who trains him with the help of his niece Maggie (Maggie Q).  Once ready, they set off to Feng's tournament, where the sudden death matches are just that; the loser is killed.  Can Randy's ping pong talents stand up to those of the other competitors? 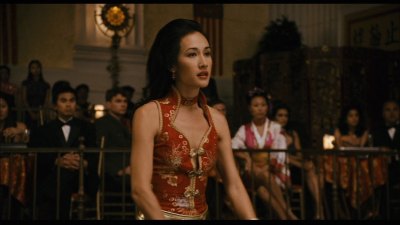 The first 15 minutes of the film were fun, and there were a couple of inspired moments sprinkled through the movie, but overall it just didn't work.  Part of the problem is they were trying to do too much; parody Enter the Dragon and make a funny movie about ping pong.  At times it felt like they were choosing to follow Dragon's plot at the expense of the humor.  The entrance dinner for example:  it followed the events in the Bruce Lee movie, but it wasn't very funny.  The ping pong games didn't provide many laughs either, which is sad since that's the focus of the movie.

The cast tried, but there was only so much they could do with the material.  Walken was excellent, as he always is, but why did they have him playing an Asian???  He looks about as oriental as Chris Rock.  Maggie Q had a lot of screen presence and was nearly always dressed in a midriff-bearing outfit which was nice to see, but she didn't have a very big role.  (Note to Maggie- go eat a cheese burger why don't cha.  You'd look much better if it didn't look like a strong wind would blow you away.)  Fogler was okay, but his comic pratfalls and pained expressions when he was kicked in the crotch didn't garner many laughs. 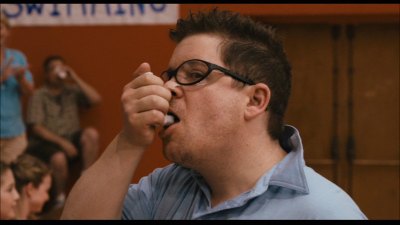 The one person who really stole the show was Patton Oswalt who played The Hammer, a county level ping pong champion who was way too full of himself.  His brief scene was hilarious and the one part that I watched over again after the movie was done.

Obviously made on a small budget, the film clearly shows a lack of money.  The sets were all obviously sets and the entire production looked like it was filmed in a dressed up warehouse.  While this could add to the comedic effect in some films, in this case it just comes across as being cheap.

This combo disc has the 1080p/VC-1 encoded HD DVD film on one side and the anamorphic widescreen standard definition image on the other.  Flipping between sides, it's easy to see the advantages of the HD DVD image.  The high definition side looks very nice with good definition and fine details that come through very well.  The embroidery on Christopher Walken's outrageous clothing makes the outfits even more over the top, and the sweat on Fogler's brow is easy to notice.  The colors are also very good and while the palate isn't very bright (aside from Walken's outfits) the tones are solid and even.

There are a lot of ping pong balls flying around at high speeds, and even though they were all CGI additions, there weren't any compression artifacts that are usually associated with fast moving objects.  There was some grain in a few scenes but it was minor and not a problem. 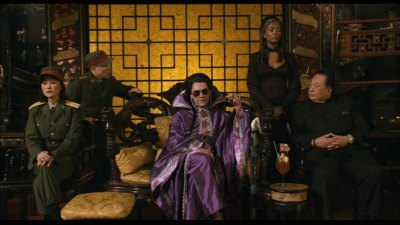 This disc comes with a Dolby Digital TrueHD 5.1 audio track as well as a DD+ 5.1 track.  The TrueHD track is the way to go of course and it sounds decent for a comedy.  Most of the time the sound is firmly planted around the screen, but there's an occasional audio effect, a ping pong ball whizzing by for example, that takes viewers by surprise and adds nicely to the film.  The audio really comes alive in the final big battle scene, with the subwoofer shaking the windows when a building explodes and the full soundstage used for the bullets and battle sounds.  Overall this is a decent sounding disc that fits the movie well.

The disc comes with some good bonus material.  There are seven deleted scenes which vary in quality.  They are mainly involve subplots that were cut and none of them would have help the movie very much.  The alternate ending, where Agent Rodriquez offers Daytona a job with the FBI was pretty stupid and they made the right decision when they put the other ending in the film.  There's also a 14-minute making of featurette; Balls Out: The Making of Balls of Fury.  This was okay, but the writer and director took the movie a bit too seriously.  These three extras were all presented in HD, which is very cool.

The only bonus item that is in SD is Under the Ball: The Life of a Ball Wrangler.  This five minute short shows the cute babe who is responsible for handling the balls in the movie.  A cheap joke that really wasn't too funny.

A rather lame film with a few mildly amusing jokes sprinkled throughout (though mainly in the beginning) Balls of Fury is a weak comedy that could have been better but it's not too surprising that it's not.  The HD DVD combo disc is nice however, with a solid looking transfer and an adequate Dolby TrueHD audio track.  This would make a good rental when you feel like a silly but forgetful comedy.


Note: The images in this review are not from the HD DVD and do not necessarily represent the image quality on the disc.