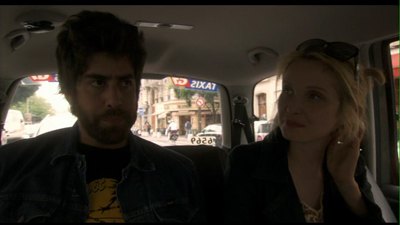 Do you ever run into one of those couples in life where it's obvious they are perfectly content in annoying the crap out of each other, and you silently thank the heavens that they found each other, saving the rest of us the hassle of having to date them?

This is the kind of couple that is the subject of 2 Days in Paris, the writing and directing debut of actress Julie Delpy. She plays Marion, a French ex-pat who likes to flirt and start fights, using both to mask her insecurity. She also has a neurotic compulsion to collect new and strange theories about how the world is going wrong and a tendency to not tell the whole truth. Marion has been with Jack (Adam Goldberg) for two years, having met him in his native New York. Jack is almost sitcom New-York neurotic, having escaped from an old school Woody Allen movie. He's fraught with allergies, possibly a hypochondriac, terminally sarcastic, and constantly jealous. Like two pieces of sandpaper rubbing together, the pair's idea of woo will make most people queasy, but for whatever reason, for them it creates sparks.

Delpy picks up this story at the tail end of a vacation, which as most travelers know is when nerves are often particularly frayed. What a great metaphor, then, for what could also be the tail end of the love affair. After some time in Italy, the lovers are stopping in Paris on the way home, where they will see Marion's parents and her friends, and she can show Jack the city where she grew up. Over the course of these days, they will meet several of Marion's ex-boyfriends, argue, run afoul of several taxi drivers with personality disorders, argue, not have sex, argue, have some fun with the language barrier at Jack's expense, argue, and very likely break up for good.

There is much to hate about 2 Days in Paris. Watching Jack and Marion is not that different than it would be to get stuck sitting next to them on an airplane. Chances are, one side of the brain will want to run away, while the other side won't want to stop looking to see what they do to each other next. He is obnoxious, she is infuriating, and much of their conflict is predicated on misunderstandings so ridiculous they would have been tossed out of Three's Company story meetings. Plus, Delpy's depiction of culture clashes somehow pulls off the double whammy of being cliché and precious all at the same time.

Yet, I kind of liked the movie. Perhaps it's to the credit of these two very fine actors, whom I have liked in other films, that they somehow make these two miscreants interesting to watch. Again, it's that notion that though their personalities may chafe my own sensibilities, it's strangely sweet how well they work together.

As a first-timer, Delpy is an impressive filmmaker--particularly when you consider that not only did she write, direct, and star, but she also produced 2 Days in Paris, composed the music, and sings the song that plays over the closing credits. It's a lot for one person to undertake, and yet she avoids the pitfall of other actors who get behind the camera and try to show off with labored visual mannerisms (Zach Braff, please step forward). Delpy manages to be clever while also showing restraint. Most of her shots are simple, but she does indulge in some zippy travel montages in order to move the story along quickly. Sure, she played it a little safe by obviously using the Before Sunrise/Sunset duo of films as her model, but at least she had the good sense to ditch Ethan Hawke as her co-star.

So, I give 2 Days in Paris a mild recommendation. Given the difficult personalities involved, it's quite possible that Marion and Jack could be the couple that I like and all the rest of my friends hate, and so I have to invite them out cautiously, keep them sequestered from the normal folks. If you like romantic movies that try to temper idealism with cynicism, or if you're a fan of Julie Delpy, you may want to take a chance with 2 Days in Paris; if, however, any of the complaints I've lodged seem like ones that you might not be able to get past, go with your gut and pick something else. 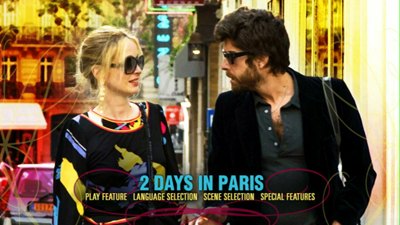 Video:
The widescreen presentation of 2 Days in Paris mainly looks good, as one should be able to expect from a brand new movie getting its first release on DVD. I did notice some soft edges, and there were a couple of times when the image appeared to skip, but I can't be sure if this is a problem that will be found in the final release or is an issue with the disc I have. 2 Days in Paris is a 20th Century Fox film, and they are notorious for sending out review copies that are basically a step up from a DVD-R. The copy I watched was intermittently watermarked with the Fox logo, and the disc itself has a blue underside. Hopefully, these hiccups will be cured before the movie hits stores.

Video Update: Having now looked over the final disc, I didn't catch any skipping problems, and overall, it's a fairly adequate job. Those soft edges I saw were still lingering, particularly in either dark scenes or backlit scenes, but it started to look more like the nature of digital video and not so much a DVD authoring problem.

Sound:
The audio is mixed in 5.1, and it's a solid job that doesn't call attention to itself, neither to the good or the bad. There are also optional English and Spanish subtitles.

Extras:
Not a lot of extras here, but a few. An interview with Julie Delpy runs sixteen minutes and covers the production of the film, including what it was like to handle so many tasks and the long gestation of the script.

Five extended scenes, clocking just under thirteen minutes, give us longer versions of sequences in the film. The additions don't seem too drastic, so these clips are kind of unnecessary. One clip in particular is just raw footage of the cat that's in the film refusing to take direction, and even as a cat lover, I give it a big "I don't care."

Though the original theatrical trailer for 2 Days is surprisingly not included, there are trailers for Blue State and The Savages.

FINAL THOUGHTS:
2 Days in Paris is an odd movie, as its fundamental flaws are personality issues that come with trying to tell a love story about two people that have personality issues. The first-time writing and directing effort from actress Julie Delpy is generally well written, well directed, and definitely well acted. It does, however, try to show two obnoxious people trying to weather their obnoxiousness in order to stay in love while on vacation. While I ultimately found myself slightly smitten with 2 Days, it was against my better judgment. Some viewers may not be able to get past how annoying Jack and Marion are, whereas others will enjoy the fact that people are different and applaud that two of the very different ones have found each other. Rent It and see which one you are. 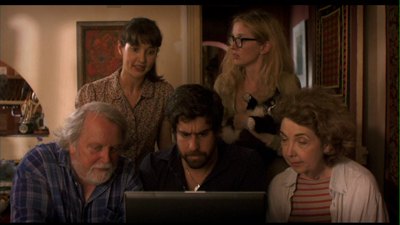