Danny Boyle burst onto the movie scene in 1996 with Trainspotting, a brilliant film about a London drug addict.  His name was on everyone's lips once again in 2002 with the release of his classic zombie flick 28 Days Later.  Jumping genres once again, in 2007 he released Sunshine, a SF film with lofty ambitions that nearly does what it sets out to do.  Fox has released the film on Blu-ray with a good looking transfer and a nice lossless audio track with makes this good though flawed movie worth watching.

The sun is dying.  50 years in the future the sun has become infected and will soon be extinguished.  Humanity comes together and created the Icarus, a space ship with a giant bomb attached that, theoretically, will start the sun working again.  It left Earth and was never heard from again. 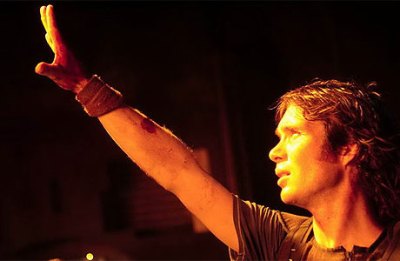 Seven years later the Icarus II is on its way to Sol, again with a bomb the size of the island of Manhattan strapped to it.  With a solar shield protecting it from the harsh heat and radiation from the sun, the Icarus II with its 8-man international crew is nearing its destination.

As they close in on the sun the crew discovers something astounding:  The Icarus I in orbit around the sun.  It's decided, though not unanimously, to try to reach their sister ship.  Not to see if there are any survivors, but to see if they can salvage the first bomb.  After all, two attempts to cure the sun would be better than one.  This means a slight course correction.  When something goes wrong however, the Icarus II's oxygen factory is damaged and their only hope to reach their destination is finding more supplies on their sister ship.

Sunshine sounds a lot like a typical SF disaster movie like The Core, and to a certain extent it plays out like one.  A small error causes a problem that needs to be mended, which in turn causes death and more problems.  This film sets itself apart from its mindless cousins in the execution however.  This is a carefully paced thoughtful film that has more in common with 2001: A Space Odyssey than Armageddon or Deep Impact.  Danny Boyle has crafted a SF film where the people are more important than the special effects or the action scenes.  You can feel the palatable dread as the mission slowly starts to sour.  When one crewmember confides to another that she knows none of them will ever return to Earth, it's just what the audience is thinking.  Yet who wouldn't sacrifice themselves to save all of mankind? 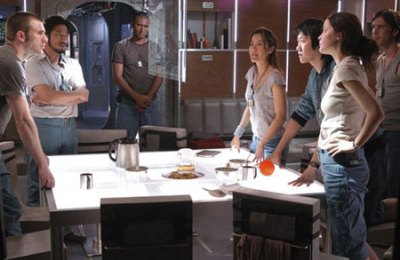 The visual look of the film is something spectacular and adds to the emotion of the film.  The scenes of the Icarus II, so gigantic in scale yet appearing so small in the dead of space brings home how alone they truly are.  The brilliant glimpses of the sun likewise underlines how awesome and huge their task is.

While watching this film (my first exposure to it) I was awestruck.  A SF fan from way back, I was thinking that this was a film that would become a classic of the genre, a great work that would cement Danny Boyle as a master story-teller.

And then we get to the third act.

For reasons that boggle the mind, in the last 20 minutes of the movie changes from an intelligent SF film into a third rate slasher pic.  I let out an audible moan when [spoiler]a deranged psycho who looks like Freddy Kruger started running over the ship trying to kill everyone. [end spoiler]  Not only did I change the tone of the film, but made it seem cheap and hackneyed.  That's only the end however.  The rest of the film is still excellent, even if it does fall in the last act.

This movie comes with a nice looking 2.35:1 1080p image encoded with the AVC codex at 16 Mbps.  The first thing that strikes viewers about this disc is the wonderful amount of contrast between the various scenes.  Images of the Icarus II floating in the deep blackness of space feature an inky black background with the silver spars of the ship being well defined and sharp.  There is a lot of black in this film, and it is consistently solid and deep without being crushed.   Just as the dark scenes look great, so do the harshly bright shots when the sun's light is flooding an observation room or the ship's solar shield is visible.  These parts are overexposed and washed out, but the bleached look they have really reproduces the impossibly bright light quite well.  Even in these scenes details are still present and the film has a well defined look.  In between those two extremes, most of the interior shots of the ship, the disc does an excellent job of recreating the look that Boyle was going for.  The inside of the Icarus II is purposefully drab and lacks a lot of eye pop, but that's certainly intentional.  The level of detail and contrast is very good too.  It's easy to see the sunlight reflecting off of the beads of sweat on the commander's brow when he's on an EVA, and the stubble on Cillian Murphy's chin looks like you could touch it.

Digitally the film looks fine too.  There was only the slightest hint of banding in one or two scenes, and aliasing was totally absent.  There was a small amount of grain through the film, and a couple of scenes had some digital noise, but most viewers wouldn't see it if they weren't looking for it.  Overall this is a very nice looking disc with only some very minor imperfections. 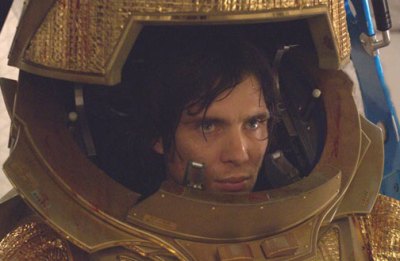 Viewers have quite a choice in the audio department.  This disc comes with Dolby Digital 5.1 tracks in English, Spanish, and French as well as a DTS-HD Lossless Master Audio 5.1.  The DTS-HD track looks sounds great.  The mix makes good use of the rears for incidental sound effects, such as when the ship is turning and the heating and cooling metal starts to creak.  This eerie sound comes from all corners of the room and is quite effective.

Being a mood piece, there are several times when the soundtrack in nearly quiet and those are just about as effective as the huge action scene at the end.  Unfortunately that wasn't always the case, and I did find some of the scenes a little too intense sonically, with the music or sound effects mixed a bit high for my tastes.  A little more restraint would have done a world of good.  These sections weren't frequent however, and most of the film sounded wonderful.

This is the second Profile 1.1 disc that I've reviewed.  The first was Resident Evil Extinction, and I found the presentation pretty cheesy.  With this disc the implementation works much better, but it still feels like a novelty that will soon fall into disuse.

Profile 1.1 is an enhanced Picture-in-Picture feature.  With the exception of the Panasonic BD30, there are currently no stand alone players that are capable of displaying the Profile 1.1 material, so if you want to see this and you don't have a BD30, you'll have to play this on a PS3.  What you'll get when you do that is basically a new way to watch the special features.  While the film plays a small P-in-P box pops up every so often and a crew member with related some additional details about the scene.  This worked pretty well, with one of the design crew talking about the Icarus II's kitchen for example.  While this was interesting enough, it only occurs ten times over the course of the film and all together these inserted clips last less than 20 minutes.  Because they are so sporadic, I'm not sure why you'd want to watch the movie like that.   These clips are also available separately so people without Profile 1.1 enhanced players can view them.

The other Profile 1.1 offering was Journey into Sound.  This was an interesting idea that nearly works.  Viewers can play four scenes and switch the audio to whichever speakers they want to in real time.  It was fun to play with this, seeing how throwing the narration to the left or rear affects the mood of the scene, but after a minute or two the newness had worn off and I moved on.

There are two commentary tracks available too.  The first is by director Danny Boyle where he talks about some of the problems he had on the film and some of the themes he incorporated.  This track is pretty technical in nature but even so was entertaining.  Even so, I enjoyed the second commentary even more.  It was by the film's science director Dr. Brian Cox.  He talks about the science behind the film and some of the flaw that managed to sneak in.  This wasn't dull or dry at all, but very engaging and interesting.  SF fans who are interested in the real-life science behind the fiction should seek this track out.

Next up are a series of 12 deleted scenes including an alternate ending, all with optional commentary by the director.  Most of these weren't all that interesting but it's nice to be able to see them.  The 23 Production Diary entries run almost 40 minutes but weren't all that engaging.  They were originally posted on the web to promote the film before and during its theatrical run, but these shorts didn't add much to my understanding of the film or how it was made.  *yawn*

The special features wrap up with something really neat; two short films.  These have nothing to do with the movie itself, but it's a nice way to get shorts disseminated so that people see them.  I agree with Danny Boyle who, in his introduction to these films, states that he hopes more people will start putting shorts on DVDs as bonus features.  The first one is Dad's Dead is a brilliant mixture of live action and animation that tells the story of a boy whose best friend is a juvenile delinquent.  It was really good and I'm glad it was included on the disc.  Unfortunately the same can't be said of the second film, Mole Hills.  This was done by a member of the crew, and I can only assume that Boyle included it on the disc out of a sense of loyalty.  Basically made some small piles of dirt on a sidewalk, set a camera up across the street, and exposed a fraction of a second's worth of film every few minutes.  The result is a six minute exercise in boredom.  Near the end the camera ever gets bumped and positions so it's shooting a parked car out of focus, but they left that in.  Just skip that one.

If it wasn't for the flawed last act, this would have been one of my favorite films from the last couple of years.  As it is, this is still a movie worth watching.  With a wonderful atmosphere and an interesting story, this carefully paced film shows that Danny Boyle certainly knows how to tell a story.  Even with the less than perfect ending, this film is recommended.