Paramount // Unrated // January 8, 2008
List Price: $36.99 [Buy now and save at Amazon]
Review by Stuart Galbraith IV | posted January 25, 2008 | E-mail the Author
In its first season Gunsmoke, like the radio series it adapted, established itself as an "adult Western" at a time when the genre on television was little more than an extension of the formula B-oaters produced by Republic, Monogram/Allied Artists and others. Gunsmoke's second year (1956-57) is a big step further forward; if its first year was adult relative to other TV Westerns, than in its second year Gunsmoke had settled into a maturity that was to TV Westerns what Twilight Zone was to sci-fi / fantasy. Its teleplays are even better than before: they're more mature and dramatically complex, and the regular cast give more assured, relaxed, and (when needed) edgier performances.

Strong genre journeymen like directors Ted Post and Andrew V. McLaglen certainly contributed to Gunsmoke's dramatic intimacy, but this evolution is probably best exemplified by the four scripts genre master Sam Peckinpah contributed during the second season. As television historian Stephen Bowie said recently, "just based on [Peckinpah's] terrific contributions to The Rifleman, Zane Grey Theatre and The Dick Powell Show, you can tell it's all there that early - all his major themes and talents, pretty much fully formed. The only way in which the films advance them is in their obviously more epic scale, and perhaps in the extent of the nihilism/existentialism you find in [films like] Bring Me the Head of Alfredo Garcia."

The Paramount / CBS DVD, unlike the full first season run of the previous release, cuts the second year in half a la their Perry Mason and Untouchable discs. Presented here are 20 half-hour episodes (running about 26 minutes without the commercials) on three discs. The shows look great, and despite an amusing glitch (see below) this is a must-have for classic TV show and Western fans. 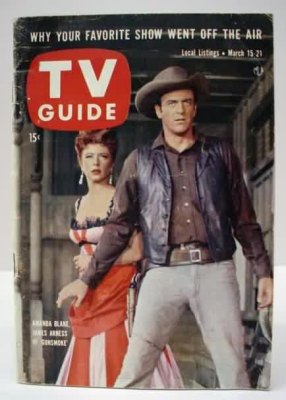 A great part of Gunsmoke's appeal is its cast and their characterizations, which in year two have been refined. Arness' Matt is by no means the standard Western Hero. Townsfolk are constantly coming to him with their problems and as often as not he's annoyed and becomes impatient with their sometimes unreasonable demands. In "Sins of the Fathers," meek hotel owner Gage Clarke is upset when mountain man Peter Whitney checks in with an Arapaho Indian bride, played by an almost unrecognizable Angie Dickinson. Against Matt's explicit instructions he gets the town so riled up two outsiders kidnap the Native American and, it's clearly implied, rape her. This sets Matt off in a way one would more expect from a Jimmy Stewart/Anthony Mann Western than a TV show.

Even better is the Peckinpah-scripted "The Round-Up," a revelatory show. Matt is reunited with an older brother figure from Matt's cryptic past (when, possibly, Matt himself was an outlaw), and when Chester's sprains both ankles the old friend is deputized to help Matt out. (Spoilers) They lament gunslingers from their past who'd shoot men in the back then make notches on their guns. Halfway through the show there's a big gunfight at a saloon owned by a guy who wants Dodge to become an "open town" once again. During the melee, Matt accidentally shoots his friend dead. Matt becomes a man obsessed, madly closing down all the saloons in anger.

At the end of the show he buries his friend - then, covered in sweat, he adds a notch to his own gun, to serve as a constant reminder of the friend whose death he caused. Wow. A '50s TV Western where the hero shoots an old pal dead by accident? I can't think of anything remotely like it. Another strong Peckinpah script is "Legal Revenge," structured as a mystery when Matt and Doc find an injured homesteader (Philip Bourneuf), bedridden with a cut-up leg. The man apparently is terrified of his wife (Cloris Leachman), and Doc believes she stabbed him.

In fairness, both Peckinpah scripts were based on stories by the prolific John Meston and possibly based on his radio scripts, and in any case the work of some of the show's other scribes generally are of that same high standard. "Brush at Elkader," by Les Crutchfield, is a strong High Noon-esque tale with Matt tracking down the a psychotic killer who ruthlessly emptied his gun on a well-liked resident of Dodge. A determined Matt travels to nearby Elkader, but the entire town down to the last man refuses even to acknowledge the killer's existence and, moreover, refuse to stable his horse, provide him with a hotel room, etc. Directed with style by Ted Post, it's an impressively dark, brooding and cynical episode.

Paramount / CBS DVD made an understandable error compiling these second season shows. An episode listed on the packaging as "How to Cure a Friend" (airdate: 11/10/56) is actually a fourth season show, "How to Kill a Friend" (airdate: 11/22/58). The mistake is forgivable; not only are the titles nearly identical, their plots are similar, too. Both involve crooked gamblers stirring up trouble in Dodge: Andrew Duggan in the show left out, Pat Conway and James Westerfield in the show accidentally included. Chances are extremely good that this problem will be corrected at some point; sticking the second season episode in a fourth season one would seem pretty reasonable. In any case the fourth season show turns out to be quite good as well, offering an excellent example of how the writers aren't averse to letting Matt lose his temper in a job that's frequently frustrating.

Arness is superb throughout; it's really a greatly underrated performance. He had been a protege of John Wayne immediately before the series, and here demonstrates that he's at least as good an actor as Wayne was, and substantially more versatile. Both in his performance and in the writing Matt's neither eager to please nor quick to choose sides or see things in black and white. Though the anchor of Dodge City he's something of an outsider; owing to his job he's forced to keep all but Chester and Doc at arm's length, Miss Kitty included. It's fascinating to study Arness' face as he weighs the complaints and concerns of townsfolk storming into his office with their problems. He says little and observes much, a man of few words who's polite and just, but ready to use his gun if he has to.

Doc's role in the show, of course, is to counter Matt's methodical, even-handedness with a more impulsive, emotional response to Matt's problems. Stone is a good match with Arness, and Doc's continually frustrated reactions to Chester's eccentricities anticipate the kind of triumvirate relationships found in later shows like Star Trek. Dennis Weaver's Chester is a delight - not quite a backwoods rube, Chester is a true eccentric, a character, and a one-of-a-kind TV original. Though presumably lacking in any formal education, Chester simple outlook on life has its clear advantages, something only Matt seems to realize.

Though once again the back of the DVD ominously warns that "some episodes may be edited from their original network versions," the episodes seem complete and aren't time-compressed. There are six-seven shows per single-sided disc, accompanied by concise episode descriptions and airdates on the reverse side of the DVD sleeve. The Dolby Digital mono (English only) is clean and clear, and the show is closed-captioned. 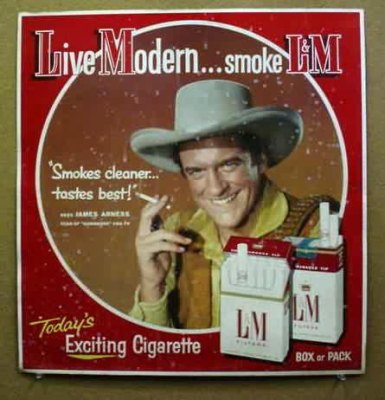 The only supplement, as in the first season set, are several minutes worth of sponsor spots, with Arness and Blake, in and out of character, extolling the virtues of L&M filter-tip cigarettes. The pack Big James Arness holds is dwarfed to the size of a domino in his ham-like hands. Even better is an ad for an electric razor which Arness suggests is the greatest invention...since the automatic pistol! And he should know - he keeps one at the ready tucked away in his dressing room!

Before the release of these new DVDs, this reviewer's generation remembered Gunsmoke mainly in its later, hour-long color version (1966-75) which in syndication were given precedent over the half-hour, black & white shows. But these early Gunsmokes are just great, terrific little semi-anthology dramas that rate consistently high. A DVD Talk Collector Series title.