Dark Sky Films // Unrated // January 29, 2008
List Price: $19.98 [Buy now and save at Amazon]
Review by Stuart Galbraith IV | posted January 29, 2008 | E-mail the Author
A very minor horror film from Riccardo Freda, the co-director (with Mario Bava) of the landmark Italian horror film I Vampiri (1956), Tragic Ceremony (1972) is both cheap and confused, despite a few flashes of atmosphere and suspense. An Italian-Spanish co-production released in the former as Estratto dagli archivi segreti della polizia di una capitale europea ("From the Secret Police Files of a European Capital") and in Spain as Tragica ceremonia en villa Alexander ("Tragic Ceremony at Villa Alexander"), the problems start with the inapt jumble of titles. Very much a product of the fading-fast Euro-horror genre of the early-1970s, this one revolves around a quartet of quasi-hippies stumbling upon a Black Mass at a spooky mansion. 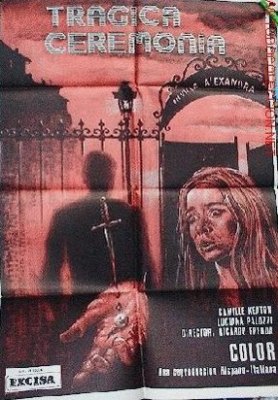 Presumably to avoid censorship problems in predominantly Catholic Italy and Spain, Tragic Ceremony is set in England but so unconvincingly is this done as to be quite ludicrous. Bill (Tony Isbert) is a depressed rich kid whose mother (Irina Demick) is having an affair with her business manager; she throws money at her son to keep him out of the house so she can enjoy her fling while Bill's father is away on business. Bill buys his mother a pearl necklace but she understandably refuses it after he enthusiastically tells her there's a legend about it being some kind of instrument of the Devil. Like that's an incentive!

Later, Bill is out yachting with friends Jane (American expat actress Camille Keaton), darkly handsome Joe (Maximo Valverde), and guitar player Fred (Giovanni Petrucci) - note the singularly unimaginative character names - when the long-haired Richie Rich shyly decides to give the unwanted but valuable necklace to Jane. She responds to Bill's kindness by making a beeline for a nearby tent to make out with Joe. On their way home through the dark and stormy night their dune buggy runs out of gas and, with Bill conveniently having left his wallet at the beach (or not; he later unaccountably finds it on his person) the four have to negotiate with Sam (Jose Calvo), a cranky gas station attendant, for some petrol.

The mysterious old geezer gives them just enough fuel to almost make it to a big old mansion, where Lady Alexander (Luciana Palzuzzi) invites them to spend the night. Little does the foursome know that Lady Alexander and her husband (Luigi Pistilli) are hosting a Black Mass that very evening, with Jane pegged for the sacrificial altar. (Spoilers) The three men interrupt the devil worshippers just as Lady Alexander, now dressed like Mary I, Queen of Scots (her cohorts are stuck with ordinary Dracula capes), is about to stab Jane but in the melee the evil Satanist is herself stabbed by Bill. This somehow prompts a mass murder-suicide among the cultists, with Lord Alexander and seven other followers variously stabbed, shot, decapitated or sent sailing through a second-storey window. The four hippes beat a hasty retreat, inexplicably panicked in the belief that Bill somehow will be held responsible for the devil-worshipper's bloodbath.

Then again, maybe they're right. Later, at Bill's father's summer house, they watch a TV news report suggesting (against all possible evidence) that the devil worshippers were murdered by Charles Manson-like hippies, based solely on a few flimsy clues: Fred's guitar and some pearls from Jane's necklace. The slapdash TV journalist also reports that while there's no sign at all of Lady Alexander, she's assumed to have been murdered, too. (So much for corpus delicti!) Alas, the four overaged drop-outs find little comfort at the summer house; the devil's curse (or something) has followed them there, as the film builds to a completely predictable "surprise" ending.


For fans of such low-rent European horror films, Tragic Ceremony has a few things in its favor. The entire story takes place over a period of less than 24 hours or so, and the fact that it's told almost entirely from their point-of-view keeps it a bit more interesting than other teens-in-trouble thrillers of this type. There are little flashes of atmosphere from Freda (credited under his usual pseudonym, "Robert Hampton") here and there, such a brief scene with Jane walking down a flight of stony steps, with lightning flashing through windows where long sheer curtains billow in the wind. The makeup effects, credited to Carlo Rambaldi, are gruesome and elaborate for the period, predating similar work found in splatter films a full decade later.

The story, though, is a mess. The script exasperatingly has them running out of gas multiple times and returning to places where they know they'll find nothing but trouble. (After the bloodbath, one almost expects Joe to go back to retrieve his guitar.) Bill is surprised to see Sam's puss pressed against a window at the villa, peering in, but after the mass suicide/murders doesn't hesitate to go back to buy more gas with that wallet he's suddenly found. The connection between the pearls and Paluzzi (seemingly dubbed by someone else), Sam and the Satanists, etc., is nebulous at best.

Tragic Ceremony is presented in an okay 16:9 enhanced transfer at 1.78:1 that approximates its original 1.85:1 (though possibly 1.66:1) original aspect ratio. The title elements are a riot of grain and while the rest of the film is an improvement, the image looks rather harsh with fair at best contrast and faded (Eastman) color. The presentation is in Italian only with English subtitles. Still, it's a big improvement over earlier bootlegged releases and the original Italian exit music (about two minutes worth) is included. The packaging, strongly reminiscent of Retromedia's DVD cover art, looks cheap.

Included is a rather neat little featurette, Camille's European Adventures, in 16:9 format, which features an interview with the star of I Spit on Your Grave, the grand-niece of Buster Keaton, and the widow of Sid Luft (!). She explains that she had been in a car accident a few years prior to making Tragic Ceremony which accounts for the highly noticeable scaring around her mouth in the film. She's lit badly throughout the picture and frankly looks much better in the interview in her mid-50s than she did at 22. She has kind words for Freda and discusses her other films there with warm nostalgia. Also included is an Italian trailer, in 4:3 letterboxed format.

Tragic Ceremony will appeal to die-hard Euro-horror fans willing to overlook the film's many shortcomings for its intermittent imagination, but all others will find it tough sledding. Rent It.