After getting heaps of praise (and an American remake) of their razor sharp comedy The Office, writer/director/actors Ricky Gervais and Stephen Merchant had the world on a plate. Gervais in particular appeared all over the place, appearing in TV shows as diverse as Alias and The Simpsons and movies such as Stardust and For Your Consideration. But the big question is what would the duo concoct as their true follow-up to The Office? Would it be another biting dissection of everyday life, or something completely different?

The answer came in the form of Extras, the story of one man's desperate climb to fame and glory. Ricky Gervais stars as Andy Millman, a "professional background artist," or movie extra. But he's a real actor, you see, he's just waiting for his big break. To aid him in this endeavor, he looks to his agent, Darren Lamb (Stephen Merchant), whose only other client is Shaun Williamson, better known as Barry from the popular British soap opera EastEnders. Lamb is, simply put, absolutely awful. It seems the only good thing in Andy's life is his friend Maggie (Ashley Jensen), who isn't too bright herself. Over the course of the series, Andy goes from neglected extra to a bona fide star, but often at the expense of his integrity. Eventually, Andy has to wonder, at what point is it worth it to sell your soul?

Much of the humor of The Office came from David Brent's overinflated sense of himself. Extras' Andy Millman is in exactly the opposite situation. In the first season (or series if you'd like to take the British route), Andy is constantly faced with the complete and utter lack of achievement in his life. Initially, Andy seems at ease with his situation. In the first episode, "Kate Winslet" (each episode is named after the actor who appears in it), the focus is on Andy's personal life. His work as an actor is simply there to provide some good situational comedy. But starting with the second episode, "Ben Stiller," we see Andy hustling for larger roles and a bigger stake in his own future. By the third episode, "Ross Kemp," this became the main theme of the show.

Season one ends with Andy's original sitcom script being picked up by the BBC. Season two flips the formula. Andy now has the most popular show on British television, but he got it by pandering to the lowest common denominator, which frustrates him artistically. His attempts to branch out and gain respect lead to some truly hilarious encounters, such as when he unloads his woes onto David Bowie at a posh club, only to have Bowie turn around and use Andy's troubles as the basis for a rousing sing along at Andy's expense. This segues into the feature-length "Extra Special Series Finale," where Andy's fame goes completely to his head. He fires Lamb in favor of a high powered agent, and drops Maggie when she has the nerve to tell him how full of himself he's gotten. At the end, he does realize what's more important in life, and it's not flashy cars and impossible to get restaurant reservations. 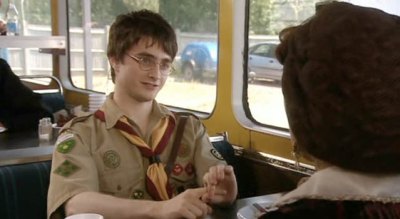 While much of the above sounds like a morality tale, let's not forget that Extras is blisteringly funny. Gervais and Merchant know what they're doing, and with this and The Office have crafted the best British sitcoms since Fawlty Towers (an acknowledged influence of the pair). In fact, many of the scenes with Lamb and Gervais feel like something out of a classic British situational comedy from the 70's, complete with the threadbare set of Lamb's office. Merchant in particular has this uncanny ability to recall and update the kind of clueless affability of many of the great comedy actors that inspired him. In Extras, Gervais often finds himself as the straight man, giving the audience a context for the absurdity we're seeing all around him.

And that outrageousness is provided not just by Lamb and Maggie, but by the assorted stars that litter the series. From Kate Winslet delighting in graphic depictions of phone sex and brazenly declaring all the cheap and easy ways to win an Oscar to Patrick Stewart's shockingly hilarious X-Men inspired script, the celebrities in Extras are in a bubble of self-congratulation. They've been hypnotized by a world that idolizes their every move, and even while Millman can see what fame has done to them, he still wants in on it. This good natured self parody by all the actors is commendable. I can only imagine how many people turned Gervais and Merchant down when the idea of such a public lampooning was presented before them. The only two who are treated with any kind of respect are David Bowie and Robert De Niro.

The thing that really sets Extras apart is its often bleak outlook. In a way, the show is almost the British television version of a Henrik Ibsen play. Andy, Lamb, and Maggie are so pathetic that their eventually the only reaction you can have to their misfortunes is to laugh. This is especially true in the second season and the Finale. In fact, at times, the Finale pushes things a little too far, as Maggie quits her career as an extra to become a cleaning lady, all set to Kate Bush's haunting "This Woman's Work." Gervais and Merchant are not afraid to feature a show that catalogues a man's personal failures time and time again, and the series is better for it. While the show would have been funny anyway, the pathos adds a layer of resonance that makes the audience identify with Andy so much more. They may be laughing at him, they're also crying with him.

In my mind, Extras is the best work Gervais and Merchant have done to date. It's a layered work, never failing to deliver the laughs while still probing beneath the surface to reveal the despair beneath the glamour. It's a strong and assured piece that stands tall next to its influences, and in turn will influence all new generations to try their hand at this whole comedy thing. But for anyone who tries, just remember: Don't let it go to your head. 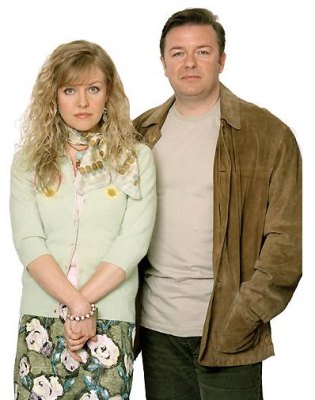 The DVD:
Extras: The Complete Series comes housed in an attractive cardboard case made to look like a production clapboard. As advertised, it contains both of the full seasons (six episodes each), and the Extra Special Series Finale.

The Image:
Extras is a fairly recent show, produced originally for HBO, and as such the production value is fairly high. This is reflected in the show's 1.78:1 anamorphically enhanced transfer, which is clean and detailed. The colors are generally subdued, as we're seeing the back end of movie sets. In several sequences we do get to see the production being worked on, and those look excellent.

The Audio:
Despite being made for HBO, which offers high definition broadcasts with 5.1 sound, Extras only offers Dolby Digital 2.0. Still, for a quintessential British comedy, do we really need anything else? The dialogue is pitch perfect, with all the nuance of Gervais and Merchant's performances intact. 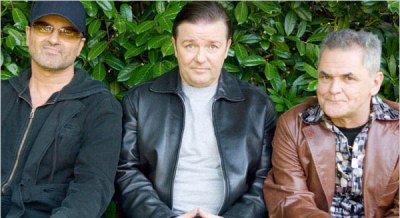 The Supplements:
Extras: The Complete Series contains all the extras from the individually available season sets. The Series Finale does not include any special features. 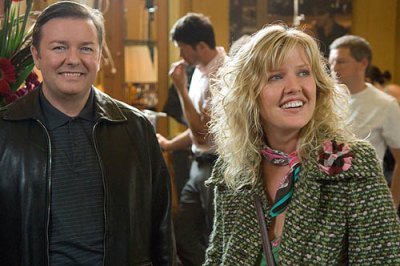 The Conclusion:
Extras confirms that Ricky Gervais and Stephen Merchant are comedic forces to be reckoned with. Having already reinvented the situational comedy, the duo top themselves with this brilliant series. Gervais and Merchant surround themselves with a bevy of talented actors and some choice celebrities more than ready to lampoon themselves. What sets the show apart is its sense of melancholy, which makes for an intriguing tension that ultimately elevates the series beyond its contemporaries. Oh yeah, and it's also completely hilarious. Highly Recommended.