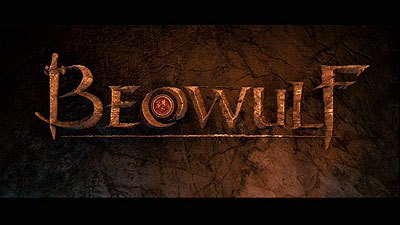 
The Movie
There's something to be said for the old stories. Sure, the fresher tales told in unique ways, like your Pulp Fiction and Memento, are entertaining, but in the end they all come back to the classics, which tend to be tales from mythology. These stories of gods and men cover all the basic story archetypes and are the foundation for the majority of our stories, whether people realize it or not.

One of the oldest of these stories committed to the written word is Beowulf, an epic poem about a warrior and the challenges he tackles. It's a rather simple story that's a touch above soap operas, thanks to a lead character who is, for the most part, above reproach and seems capable of doing anything. Like Superman though, it's quickly obvious that Beowulf's stories will lose interest if there's no flaws in his "armor." Writers Neil Gaiman ("Sandman") and Roger Avery (Pulp Fiction) recognized this, along with a few other obstacles that stood in the way of making the poem into a cohesive film, and "fixed" them in their screenplay. As a result, the Beowulf on film is not the Beowulf of legend, but as it is likely that Beowulf grew and changed depending upon who told his tale, so it is with Gaiman and Avery's version of the story. 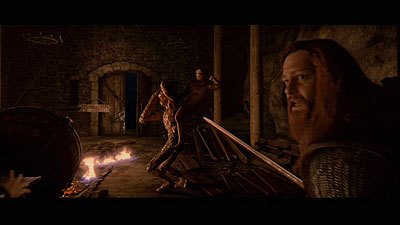 In the film, directed with flair by sci-fi/fantasy master Robert Zemeckis, Beowulf (Ray Winstone) is something of a mercenary, brought to the kingdom of Hrothgar (Anthony Hopkins) to deal with Grendel (Crispin Glover) a monster who attacks the king's people by night, killing them with ease with his massive, deformed body. Following a battle between Beowulf and the monster, the man falls in the sights of Grendel's mother (Angelina Jolie), who wants revenge on Beowulf for his actions. The form of that revenge, which strays tremendously from the poem, is what makes the three acts of the film work better than the continuity of the poem ever did, tying together the film's main characters, and giving the final scene, in which an older Beowulf must do battle with his past sins, perfect motivation in the world of the myth.

It's the rare case where writers doing an adaptation of a story manage to tell it in a way that can be considered an improvement of not just how the story is told, but the plot itself. And despite a focus on battles and violence, the true theme of Beowulf, aside from the dangers of a lust for power and how every action has a cost, is the power of storytelling, which makes for a very meta experience, considering the original tale's status as a story. The folk tales spun by and about the hero are just as important to his reputation as anything he's actually done. This very contemporary angle on a very ancient yarn is just one example of how thoughtful Gaiman and Avery's adaptation is. It's also just one way in which a modern sensibility sneaks in, as the film also manages to have a bit of fun, thanks to Beowulf's predilection toward battling in the buff, as it uses every convenient shadow and jutted out obstruction to keep his Great Dane from sight.

Though the story, and the action-packed battle scenes that fill it out, are entertaining and engaging, the real reason this movie works is how it was made. Using an update of the motion-capture system Zemeckis used on The Polar Express, the film takes full advantage of its incredible cast, while at the same time putting them into a world that melds truth and fantasy into a hybrid setting befitting a character who represents both sides of the reality divide. It's truly incredible to see action that would fit seamlessly into "God of War" with realistic actors who can actually act, as once you get past the hammy Bacchanalian performance by Hopkins, you get to enjoy some great turns by Winstone and Glover, and what can best be described as "being" on the part of Jolie, who is slinky and scary, and the perfect embodiment of temptation. The characters Zemeckis and company created here are as close to a virtual actor as we're bound to get any time soon, and provide the kind of best of both world benefits the world of film would be smart to embrace.

Note: This is the director's cut of Beowulf, but I'll be damned if I noticed much of a difference beyond more gore, mostly blood splatter, during the battle scenes. You're certainly not getting any additional nudity on the part of our hero or Angelina Jolie. 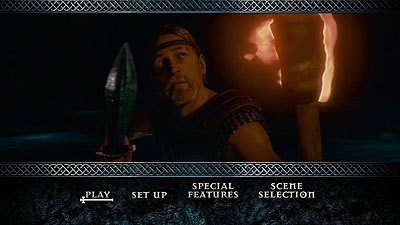 The DVD
A one-disc release, Beowulf is packaged in a standard keepcase, and features an animated, anamorphic widescreen main menu with options to watch the film, select scenes, adjust languages and check out special features. Audio options include English, Spanish and French Dolby Digital 5.1 tracks, while subtitles are available in English, French and Spanish, along with closed captioning.

The Quality
The anamorphic widescreen transfer on this DVD looks outstanding, the result of being taken directly from the computer to disc, maintaining exactly the same image the creators started with. Colors are rich, when appropriate, delivering the film's precise palette perfectly, and the level of detail is extremely high, making all the small touches in the film's lush virtual sets clearly visible. Surprisingly, considering the amount of fast movement in the film's many action sequences, they never give in to blurring or bleeding, keeping the image clean and crisp throughout. The only negative about the image is inherent in the technique, as computer animation hasn't yet perfected human movement yet, which results in some awkward moments, such as during the battle between Beowulf and Grendel, where every visual trick in the book is used to hide some of the imperfections, mostly to good effect. If you're not a nitpicker (like me) you probably won't notice these things. You'll just be amazed at how good it all looks, especially during the finale.

The audio, presented as a Dolby Digital 5.1 track, keeps up with the image every step of the way, which is key for a sword and sorcery epic like this. From the bolder moments of dragons and clanging steel to the more subtle sounds on the edges during quieter moments, you'll hear every aural detail clearly, and with an aggressive pulse when required. The score, provided by Zemeckis collaborator Alan Silvestri, is sweeping and equally powerful, though dialogue can get a bit buried in the sound mix, though in the chaos of the scenes, that probably makes sense.

The Extras
The lack of an audio commentary by Zemeckis, who has been quite good in the past at such extras, and the complete absence of Jolie from the extras gets things off to a disappointing start, but the first featurette, the 24-minute "The Hero's Journey: The Making of Beowulf" takes away a bit of the sting. Shot entire on the set during the motion-capture portion of the production, the piece gives you pretty much all you need to know about the process, letting you watch as Winstone, Glover and company get into the wacky gear they need to be digitized and play around on an entirely virtual set. It's extremely interesting material for anyone curious about how the animation was achieved, and with unique personalities like these involved, it's entertaining to boot.

The extras somewhat thin out from there, beginning with "Beasts of Burden," which checks in at seven minutes, focusing on all the creepy creatures that populate the film, giving you a look at a good deal of the fantastic concept art created during pre-production, along with some interviews with the cast and crew who gave them life. It's followed by "The Origins of Beowulf," which spends just over five minutes on the inspiration behind the film, including Zemeckis' lack of interest in the original poem and the writers' way of developing the story. The story of the film wraps with the very short (under two minutes) "Creating the Ultimate Beowulf," a look at how they pulled together the main hero with a great actor and great animation.

"The Art of Beowulf" is a five and a half-minute featurette on the film's incredible visuals and the paintings of Doug Chiang, who developed the look of the movie. A lot of work and thought went into the images, and the unique multi-layered concept art display is a wonder to behold. It's followed by six unfinished scenes that were cut from the film, none of which deserved to stay, though a pair expand on moments that were a bit glossed over in the final film. The extras wrap with the film's theatrical trailer and a handful of additional previews, including the excellent clips for Iron Man and Shine a Light. 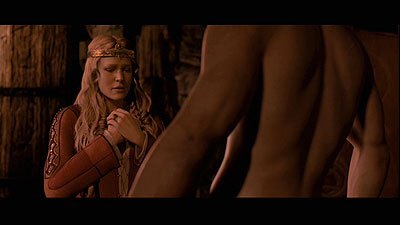 The Bottom Line
For such an immense story, Beowulf is conspicuously small, made up of a concise storyline (aided greatly by the writers) and really just a few scenes, which makes it an unlikely action blow-out. It's the incredible energy and intense acting, along with the vast scope allowed by the animation style that makes it feel so massive. Ultimately, it's such a simple film that it's hard to not buy into it and roll with the action. The DVD presentation is just what you'd hope for from this type of movie, though the extras are a bit underwhelming, mostly in terms of the quantity, considering how many facets of the film could be explored in depth. This is a perfect film for a Saturday night veg-out, but whether it has much of a shelf life will depend upon your specific taste as far as swords, demons and naked dudes go.