Dr. Dolittle: Tail to the Chief

How do you say, "This movie stinks," in Pelican or Pekinese? Oh, wait; that's right - the animals speak English in this film. So...this movie stinks. Arf, arf and quack. The third sequel to the abysmal 1998 Dr. Dolittle remake with Eddie Murphy, Dr. Dolittle: Tail to the Chief (a small hint of the levity to come) has Kyla Pratt returning as Maya Dolittle, the daughter of Murphy's eponymous character, for another dreary, laughless leg-lift on the straight-to-DVD fire hydrant. 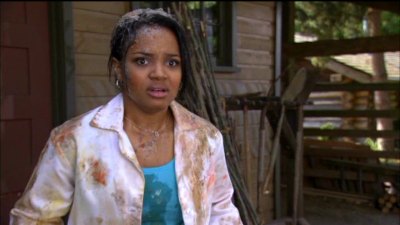 In Dr. Dolittle: Tail to the Chief's ridiculous plot, Maya finds herself ready to enter San Francisco University, hoping to enroll in their veterinary college. But the Admissions Committee, impressed with her status as the daughter of the world-famous vet who can talk to the animals, is less than impressed with her grades, and gives her four weeks to achieve something to change their minds. Dejected, she returns home to a pep talk from her mom, who assures Maya she'll find her own way, despite her poor grades (her mother's use of "Ain't ya, yeah?" might be the first clue to those "D's" and "F's").

Fortunately, the White House comes calling on the Dolittle family. Intern Cole Fletcher (Niall Matter) and White House Chief of Staff Harold Dorion (Malcolm Stuart) need Dr. Dolittle's help with the President's naughty puppy, but since Eddie Murphy wouldn't dream of showing up in this dreck without a $15 million dollar paycheck (I mean, since Dr. Dolittle is away on business), they have to settle for Maya, who also speaks to animals. Evidently, the President's (Peter Coyote - yes; how sad, right?) King Charles Spaniel Daisy likes to tear up the White House, and an important dignitary, Prince Tharoor (Kwesi Ameyaw) is coming to America with his daughter, who adores Daisy, so if the Prince's rainforest is going to be saved from the evil developers, then Daisy has to be "well" mentally, so...Jesus, do you believe that plot? If that's what gets greenlighted today, I'm getting an agent.

I make no bones about being biased against the entire re-booted Dolittle franchise; I endured the first remake back at a drive-in in '98, and spent most of my time watching the other screen in my rearview mirror. I also make no excuses for loving the original 1968 musical with Rex Harrison - admittedly, a film most people despise - but, like all the pros here at DVDTalk, I'll give any film a fair shake. But Dr. Dolittle: Tail to the Chief is a bow-wow from first woof, and it's inconceivable to me how anyone involved with it would believe it has even the slightest potential to make kids and parents laugh.

I mean, it is supposed to be a comedy, right? So...where are the jokes or the gags? "Mild" doesn't begin to describe Dr. Dolittle: Tail to the Chief. I'm not asking for wild, raucous comedy here (if anything, Dr. Dolittle: Tail to the Chief's tameness is its only slight, very slight, saving grace, considering the crap out their for kids today), but could I at least get a chuckle or even a titter? There's a monkey in it, for God's sake, and the filmmakers couldn't get a laugh with that? How hard is it to generate laughs with a monkey? Has it really come down to one or two fart and poopy jokes as the baseline for family comedies today? Is that really it?

The cast is anonymous (tellingly, comedian Norm MacDonald, who I believe has voiced Lucky the Dog in all the Dolittle films, is unbilled here again, which isn't surprising considering his less-than-thrilled delivery), with the exception of Coyote. I remember big things being predicted for him when Jagged Edge came out in '85, so to see him in Dr. Dolittle: Tail to the Chief, taking his role so seriously, without even a hint of humor or a wink to the audience, I don't know whether to feel sorry for him or to scold him for failing to understand what his role is in this ridiculous farce. If you think I'm being too harsh on what is essentially a little kids' film (because what tween would sit through it?), two of my younger children came and sat down with me to watch Dr. Dolittle: Tail to the Chief.

The Video:
The anamorphically enhanced, 1.78:1 widescreen transfer for Dr. Dolittle: Tail to the Chief looks a little blurry at times, whenever there's some sudden movement (perhaps shot on digital?), but overall, it's a clean, if unspectacular presentation (just a note: this review is based on a screener copy, not a final shelf product, and as such, any A-V rating should be judged accordingly).

The Audio:
The Dolby Digital English 5.1 stereo mix is more than enough for this lame film. Subtitles in English and Spanish are available.

The Extras:
There are several short featurettes detailing the production of Dr. Dolittle: Tail to the Chief: Critter Casting Sessions (3:43); Working with Actors of a Different Breed (5:39); and Goin' Wild (5:34), all of which would be of little interest to young children. Learning About Endangered Animals, on the other hand, is an informative little interactive feature the kids might have fun with. And Inside Look gives a short preview of the new CGI Horton Hears a Who.