Warner Bros. // R // February 5, 2008
List Price: $35.99 [Buy now and save at Amazon]
Review by Stuart Galbraith IV | posted February 28, 2008 | E-mail the Author
The Brave One (2007), the Neil Jordan film starring Jodie Foster, very nearly qualifies as a direct remake of Death Wish (1974), the controversial Charles Bronson vigilante thriller that inspired dozens of crummy, exploitative imitators (including four vastly inferior if perversely entertaining sequels). The two films are fundamentally identical in all the essentials, but where Death Wish is an unjustly maligned, near-great film often mistakenly likened to the genre of right wing thrillers that followed Dirty Harry (1971), The Brave One is by contrast a frequently simplistic and implausible high-concept fantasy masquerading as an psychological study of great importance. In its defense, there are a few good ideas mixed in with several notably bad ones and Jodie Foster is eminently watchable, though this is not one of her better performances. The Blu-ray disc offers a fine if unexceptional presentation. 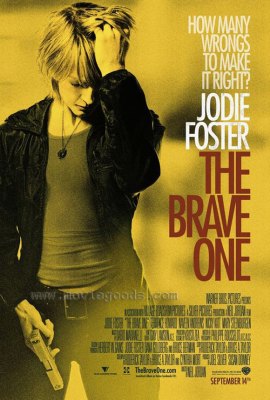 In Death Wish, Bronson plays Paul Kersey, an ordinary man, an architect, whose life is turned upside-down when his wife is murdered by New York street punks and their daughter raped and beaten into a catatonic state. Gradually, circumstances find him owning a gun, and eventually he becomes a street-patrolling vigilante, popular with some New Yorkers but politically problematic for the police, especially the cop (Vincent Gardenia) investigating him.

The Brave One tells pretty much the same story with NPR-styled radio commentator Erica Bain (Foster) struggling to come to terms with a Central Park assault by street punks in which her dog is stolen, her fiancé (Lost's Naveen Andrews, an Indian-Brit obviously chosen to offset all the black and Latino bad guys) bludgeoned to death, and she beaten into a coma. Like Paul Kersey, Erica slowly drifts into vigilantism, and has a similarly morally-torn cop (Terrence Howard) hot on her trail.

Death Wish was quite controversial at the time of its release and condemned by many critics. Vincent Canby, writing for The New York Times called it a "bird-brained movie to cheer the hearts of the far-right wing, as well as the hearts of those who don't think much about politics but just like to see people get zapped, without regard to color or creed.... [It's] so cannily fabricated that it sometimes succeeds in arousing the most primitive kind of anger. Yet it's a despicable movie, one that raises complex questions in order to offer bigoted, frivolous, oversimplified answers."

It obviously resonated with audiences fed up with out-of-control urban violence, but look closely and it's pretty obvious Death Wish does not condone Kersey's actions even if its cheering audiences did. Kersey is a man shocked and appalled by his own transformation, by the bloodthirsty killer he finds inside himself; gunning down others, even scurrilous street punks that are a cancer on society, initially repulses him. He knows what he's doing is wrong and yet it becomes a kind of addiction. The final shot of that film, with a grinning Kersey about to mete out his own brand of justice once more, to this reviewer clearly is the expression of a crazy man fast becoming a danger to us all.

Unfortunately, in all of the Death Wish sequels, the increasingly cartoony scripts clearly are completely on Kersey's side, and though trashily entertaining they've only further undermined the original film's power and muddied its intent.

In wanting to have its cake and eat it, too, The Brave One is much less successful and believable. The film plays like it was initially conceived as more an ambitious rumination on the post-9/11 culture of fear and its impact on American urbanites, but the finished film only fleetingly alludes to this. Instead, the picture takes several steps backwards from Death Wish by shamelessly pandering to audience demands with a climax more on the level of a Death Wish sequel, with a final shot so outrageously unbelievable as to be beneath contempt.

Where Death Wish is ambiguous to some degree but ultimately clearly anti-vigilantism, The Brave One is two hours of disingenuous lip service with an ashamed Erica nearly turning herself in, constantly asking herself questions like, "Why doesn't my hand shake? Why doesn't somebody stop me?" etc., only to suggest at the end that for victims of violent crime blowing away punks is the cure to one's psychological ills, that you won't have to pay for your crimes, and you'll even get your dog back in a sentimental clinch straight out of Lassie Come Home.

The dumb idea of making Foster's character a well-known, raspy-voiced radio personality was apparently to provide her a forum to deliver long monologues about her troubled state of mind, and to connect (or not) with her radio audience. But to say that talking through her own vigilante crimes on the radio strains credibility past the breaking point would be an understatement. Particularly unrealistic is that Erica's boss (Mary Steenburgen) would a) let her go on the air, live, while Erica clearly is mentally unfit; b) allow an interminable stretch of dead air after Erica freezes up one sentence into her live-on-the-air commentary; and c) that Erica would then recover and ad-lib a flawlessly-delivered literate essay; and, finally, that d) audiences all over New York would embrace it prompting Erica's boss to order more of the same. It's also hard to swallow that Erica's overwritten commentaries would ever be accepted for broadcast in the first place; her speeches oftentimes play like Woody Allen's prologue to Manhattan: "New York...buildings sprout like chromosomes on the DNA of its streets...." When later in the film people call in to the station to speak on-air with Erica, they sound nothing like real people calling into real talk shows.

Foster can't do much with a part limited to expressions of fear and loathing. Her character takes up smoking, unconvincingly, and one eventually tires of the overall approach, which has the leads virtually whispering their way through the entire picture. The film is full of odd choices: an overuse of oblique angles, a classical technique to display psychological unbalance; the oddly realized scene with Erica unhesitatingly following a total stranger down dark alleys to buy an illegal gun when moments before she seemed terrified walking the corridors of her own apartment building.

According to the script, she has good reason to be afraid. In early scenes Erica is so oblivious to the danger lurking around every corner that she thinks nothing of walking around Central Park (the ominously-named "Strangers Gate," no less) late at night. (Being mid-June, presumably we're talking well after 10:00 pm.) After she's out of the hospital she can't walk into a room without stumbling onto a violent crime in progress, and leaving it awash with pools of blood.

Filmed in Panavision on Kodak and Fuji stock with theatrical prints by Technicolor, The Brave One looks okay on Blu-ray in its 1080p / 2.40:1 transfer, up to current contemporary standards. Visually, the film is very dark but the format and the transfer are more than able to handle the deep, subdued pallet and black blacks.

Audio options include Dolby TrueHD 5.1 and Dolby Digital 5.1, the latter in Spanish and looped-in-Quebec French as well as English, with subtitles available in all three languages. As stated earlier most of the dialogue is delivered in annoyingly hushed tones throughout, and this contrasts her narration and the music tracks, which go out to all speakers and threaten to overwhelm the room. (I found myself constantly adjusting the volume with my remote.) The effects track, less aggressive than some, is up to contemporary standards.

Two other notes: I found the menu screens somewhat user-unfriendly, with type too small even on big TVs and whose highlights are difficult to see clearly. The cover art is distractingly bad. Who is that on the cover? Jodie Foster? A hair salon model? A CGI character from Beowulf? Thankfully, Foster doesn't look anything like this in the film.

Supplements include I Walk the City, a 1080p high definition, back-slapping fluff piece that's singularly tub-thumping without saying much of anything, despite on-camera appearances by Jordan, Foster, etc. The disc describes it as "pay[ing] homage" to vigilante thrillers but actually the interviewees are rather condescending toward them, thinking theirs is the first such film with a remorseful protagonist.

A montage of deleted scenes, in standard definition, just sit there; there's no set-up or introduction, and no sense of where the footage was supposed to have gone. And that's it. No trailer. No commentary.

The Brave One would have been better had it committed to one approach or the other, to make a retro-vigilante film with some substance, or a serious drama that didn't pander to the bird brain audience Vincent Canby writes about, and which now totally dominates the mainstream market. Jordan and Foster, among others, are too smart to let this totally get away and the film has a few moments that hint at something better, but overall The Brave One is a major disappointment. Rent It.