Jean Luc Godard is an undisputed master of cinema. His innate understanding of form and content rocketed him to the top of the world film scene when his first movie, Breathless, debuted in 1960. For the next five years, Godard's craft grew exponentially, as he deconstructed genre after genre. Many of these films featured his wife at the time, Anna Karina. But by 1966, despite numerous international accolades and a catalogue of work that would make almost any other filmmaker green with professional jealousy, Godard had lost his way. He intended to adapt the American novel Obsession, which would take him back to the subject of a pair of star crossed, crime-bound lovers that he first examined in Breathless. However, Godard was no longer content to tell a simple tale. No, he had bigger aspirations, but no clue of how to achieve them. The result is Pierrot Le Fou.

Jean-Paul Belmondo plays Ferdinand, a bourgeois family man who, on a whim, runs off with the babysitter, Marianne (Anna Karina). They have seemingly no plans, but to make the best of the time they have together. But far from being an idyllic lover's getaway, the trip becomes Godard's mouthpiece for anything and everything he wants to say about life, war, politics, and even his failing relationship with his wife. It's bizarre, disjointed, fearless, and utterly brilliant.

By 1966, Godard had positioned himself as the world's most experimental major director. His films were purposeful deconstructions of cinematic convention that still contained enough hallmarks of their respective genres to appeal to both the intellectual community and larger audiences as well. After the hard-edged science fiction of Alphaville, Godard found himself quickly losing interest in this style of working. When he began work on Pierrot Le Fou, he admitted to having no clue what he was doing. "I remember that when I began Pierrot Le Fou, one week before, I was completely panicked. I didn't know what I should do," he would recount later. This feeling of panic, combined with a desire to shed old habits, led Godard to try new methods of improvisation and innovation.

An interesting, and seemingly unrelated, element pops up for the first time in Pierrot Le Fou. Specifically, Godard's fascination with and anger over the Vietnam War, a theme that would engulf subsequent works like Weekend and in many ways prompt his move towards radical Communist filmmaking. Here, the indictment is less pervasive, although none the less scathing for it. While the war is mentioned at several points, there is one scene in particular where Ferdinand and Marianne put on a pantomime show that lambastes and condemns the war. It's both funny and sad at the same time. The atmosphere of the absurd is heightened by several American onlookers who comment, "Hey, hey! That's pretty good," completely misunderstanding the implications of what they're watching. In its way, that scene is a more scathing indictment than any of the diatribes Godard would level against the war in later works.

That sequence represents the emancipation of Pierrot Le Fou. Godard was bidding adieu to more linear narratives, and embracing a more direct cinema, with the emotions right on the screen. Pierrot Le Fou tracked the failing state of his marriage, with his own wife, Anna Karina, in the role of the destructive, fickle woman. It's somewhat amazing that Karina agreed to the role, given the animosity Godard must have been pouring on her personally and professionally. Perhaps it shows the separation Karina had between her work and her personal life that Godard simply couldn't share. It's Marianne who woos Ferdinand away from his wife and family, Marianne who spurs on many of the film's calamities, and Marianne who ultimately dooms the couple.

Pierrot Le Fou is hard to place. It shows a willingness on Godard's part to begin a new phase in his life, both artistically and personally, but contains the detritus of the life he's leaving behind. Karina's presence marks the film as a part of the run that began with Breathless, and the style still has the freewheeling approach he began with that picture, as well as several intentional touchstones to his previous work. He hadn't yet perfected the dense and confrontational approach he would utilize in Weekend, but he was no longer content to be as carefree as had been. Pierrot Le Fou marks a definite turning point in Godard's career, just as it was meant to signify a watershed moment in his life. It's tough as nails, whimsical, inventive, sad, nihilistic, funny, and ultimately great art. 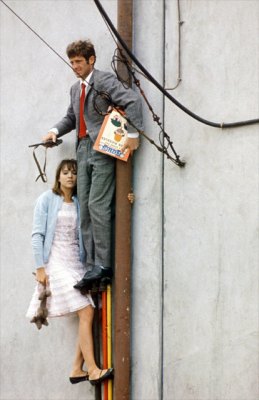 The DVD:
The Criterion Collection once again does justice to Godard's work with this two-disc special edition of Pierrot Le Fou.

The Image:
Criterion presents Pierrot Le Fou in its original aspect ratio of 2.35:1 in an anamorphically enhanced transfer. Working from a new high definition transfer, Pierrot looks stunning. While the graininess of the 60's film stock is left intact, the colors are free to pop and blossom without bleeding. Pierrot Le Fou is all about color. Look at the reception, awash in solid hues, or Ferdinand's first car ride with Marianne, punctuated by colored lights, interjected at intervals against a solid black background. The transfer also reveals nice details, such as the eyelashes on Karina's face.

The Audio:
Criterion offers a mono French track with English subtitles. The track is serviceable, but not outstanding. Some minor hiss is noticeable, although there's no audible distortion. Given the frequent location filming and handheld style, it's entirely possible that the audio elements simply cannot be made any better than they are here.

The Conclusion:
Pierrot Le Fou marked a turning point in Jean-Luc Godard's work and his life. It's as evocative today as it was in 1966. This release by the Criterion Collection offers an excellent video transfer and a wide variety of supplemental materials that help form a new understanding of the film. For neophytes to the French New Wave, Breathless or Jules et Jim would most assuredly be a better starting point. But for those ready to take the plunge into the darker, headier waters that Godard offers, Pierrot Le Fou is one of his most challenging and rewarding works. Highly Recommended.

Note: The images in this review do not represent the image quality of the DVD.