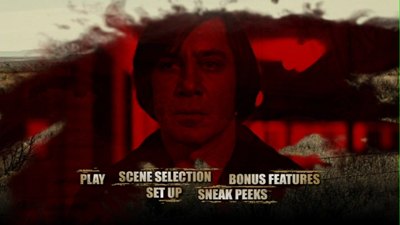 My take on this year's Academy Awards was that it was a tough year to get it wrong. Except for a few glaring exceptions (*cough* Atonement *cough*), the major categories were packed full with amazing talent. This embarrassment of riches meant no film scored a clean sweep, though the Coen Bros. masterful rumination on time and tide, No Country for Old Men, came close.

It's an interesting film to ponder, because it seems to me that its fan club is populated with just as many people who misunderstand the film in the same way its detractors misunderstand it. I realize that interpretation of any art form is subjective, and I definitely subscribe to the theory that any explication is valid as long as it can be backed up, so I am not saying that these people are wrong. Even so, let me tell you why they are.

Most complaints hinge on the now infamous climax interruptus and the following tumbledown denouements. In short, not to give too much away for the people who have been waiting to catch the flick on DVD, some viewers have been upset by what was not shown, the point in the movie that conventional wisdom and Robert McKee would likely suggest is the proper ending. In truth, if this action had been shown on screen, it would have been the only conventional element in an otherwise unconventional picture. If No Country for Old Men was the kind of western/crime picture it is regularly painted to be, I would think the dissenters were on the side of the angels; however, the contrary is true, and the movie, like the best rock 'n' roll, is running with the devil.

Adapted from the novel by Cormac McCarthy, No Country for Old Men is less a tough-guy genre story and more of a lament for the same. McCarthy and the Coens have come to bury Clint Eastwood, not to praise him (much less save him). (And, for the record, the absent scenes are also absent in the book.) It's not about the crimes or the getaways, it's about what these events represent. 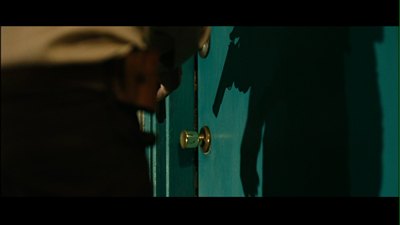 As a good indicator of where some of the well-meaning attention No Country has garnered has taken a wrong turn is the overwhelming amount of ink devoted to Javier Bardem's performance as Anton Chigurh. Don't get me wrong, every ounce of praise heaped in Bardem's direction is deserved. His portrayal of the amoral Chigurh is one of the most carefully wrought and fiercely scary portrayals of a bad guy ever put on celluloid. Yet, there is a reason Bardem won for Best Supporting Actor and not as the lead. To consider Chigurh the lead is like giving the Death Star top billing in Star Wars. Chigurh is a force of the times, a catalyst for change, the unerring and unbending agent of fate who forces the hands of the men who run from him and the ones who pursue him. We've all seen that coin toss scene a million times now, and it's an important moment in the movie. Win or lose, you have to play, and if you don't know that, get out of the way, you're already done.

Though No Country for Old Men is an ensemble piece, if I had to pick a lead, I'd say it's the Tommy Lee Jones character, Sheriff Bell. He's the old man that the country has abandoned. He represents past values, the guy who got things done a certain way and had certain unassailable beliefs that he never thought would be rocked. Chigurh is the powerhouse that is pounding at the Sheriff's foundations, while Llewelyn Moss (Josh Brolin) is the modern man caught in between. He doesn't have the history of Bell to rely on, nor has he fully sussed out what the new system of values will be in Chigurh's future. He's running from Chigurh's deathly vengeance while Bell is trying to embrace him, to keep him safe. Neither position is Moss' place, and thus he must keep moving. The alternative is stagnation and death.

The beauty of McCarthy's metaphor is that it comes dressed in familiar armor, and thus the film adaptation shows up in the trappings of genre. One can easily enjoy the movie in that sense, but if you aren't watching for the way the Coens are dismantling genre, removing each piece of armor one by one, then you are likely going to find some disappointment when your expectations are subverted.

Funnily enough, all of the characters in the movie are going to learn essentially the same thing about expectations. Their belief in the order of the universe holds little weight, as the universe is wont to spin at its own accord. Even Chigurh, who attempts to destroy order by imposing his own concoction of chaos, is forced to learn what real randomness is. Moss' wife (Kelly MacDonald) is the only one willing to call him on it. His coin, as she explains, has no say in his actions, it's really just him, he will act as he will. His last scene in the movie is when one of the few truly random acts occurs, the one thing he doesn't make happen.

So, what then does a man do when the universe fails him? Keep soldiering on, it seems. Sheriff Bell finds no satisfaction in surrender, and the dreams he shares with his wife, of the inconsequential material world being lost and the hope for some light in the darkness, are suggestive of the only absolutes he can be sure about. 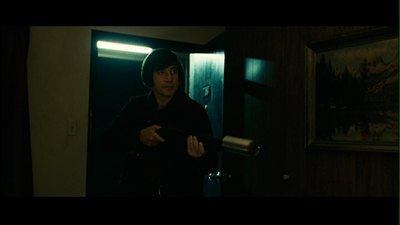 For my original thoughts on the movie, and the Joëlle Jones illustration that accompanied it, read my write-up of the theatrical release.

Video:
The anamorphic transfer is 2.35:1, preserving the original aspect ratio of No Country for Old Men. It's a beautiful job, and you'll find no reason to nitpick. Details come through clearly, colors and values are rich, and overall, it has all the nuance we saw when we settled into the movie theatre and watched this marvelous motion picture for the first time.

Sound:
The original theatrical soundtrack has been put on disc as a 5.1 Dolby Surround mix. It's a warm soundtrack with lots of atmosphere, working all the speakers and bringing the movie alive.

Subtitles are available in French and Spanish, as well as English for the deaf and hearing impaired.

Extras:
There are three documentary featurettes culled from one round of interview footage with cast and crew, and together they total about 40 minutes of extras. While the look and feel of these akin to the usual promotional lightweight material we expect on studio discs, the bonus features are actually fairly substantive in that what they lack in running time they make up for in focus by really sticking to the program.

The longest of the features is "The Making of No Country for Old Men," which looks at the full scope of production, start to finish. "Working With the Coens" expends its energy on the special relationship of the sibling filmmakers. Finally, "Diary of a Country Sheriff" uses the Sheriff Bell character to dig into to the meaning of the movie and both the times and the region he represents.

There are several trailers to watch, as well, advertising other movies and the Blu-Ray system.

FINAL THOUGHTS:
For some movies, the stars align, and every place the filmmakers step marks the exact right footprint on the path of success. No Country for Old Men is just such a movie. Applying their genre-bending skills to an adaptation of a Cormac McCarthy novel, Joel and Ethan Coen have made a true 21st-century masterpiece, filled with a longing for a fading past and the dread of an oncoming future. Bristling with its own unique energy, the film is brought to life with devilish details and bravura, though often understated, performances by a trio of remarkable actors--Tommy Lee Jones, Josh Brolin, and the incomparable Javier Bardem. A western, a crime movie, and a chase film are all folded into an existential rumination on morality and the nature of choice. I could go on for pages about how great this movie is, but reading that would just delay you from watching the film. Highly Recommended. 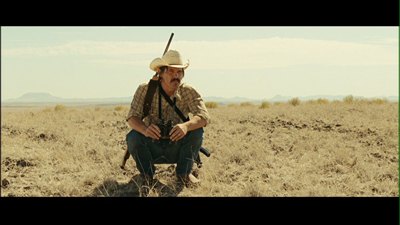