Jayce and the Wheeled Warriors, Vol. 1 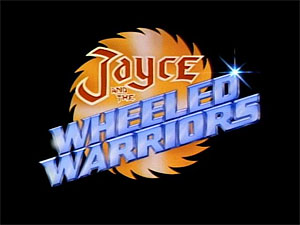 
The Story So Far
Jayce and the Wheeled Warriors had a decent run during the mid '80s, in support of a somewhat unique toy line, but it never achieved the popularity of other shows from the era Despite that, it's held in high regard by the viewers it connected with. A short four-episode sampler made it to DVD in February 2004, and was re-released in March 2007.

The Show
I clearly remember the Wheeled Warriors toys, which were a rather impressive collection of highly-customizable assault vehicles and their creepy plant-based adversaries. Sure, there were some unusual touches, like heroic faceless action figures in business-wear and the booger-turd drivers in the bad guys' cockpits, but overall, they were fun. Unfortunately, it was missing a main ingredient that all the Transformers and G.I. Joe's had: a good story. Sure, you had the so-called Lightning League (the good guys) and their enemies, the Monster Minds, but that's about it. It's hard to get engaged in a battle between Blank-faced Pilot No. 1 and Sort-of-like an Alien Brain.

similar to most toys in the '80s though, there was a cartoon to accompany them and essentially advertise for them. But whereas you could reenact the animated adventures of Optimus prime or Lion-O with your action figures, you couldn't do the same with the Wheeled Warriors. That's because the show had to create an entire cast and universe around the idea of some heavily-armed tanks. As a result, you couldn't pretend to be the star of the show, the skunk-haired Jayce, who traveled the galaxy trying to find his father Audric and the other half of the magical root amulet he wore around his neck. 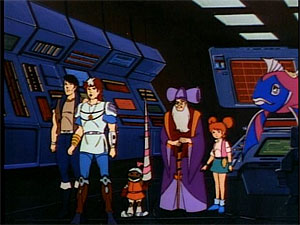 Why is he trying to find his dad? Well, Audric accidentally created a villainous strain of plant-creatures who could transform into powerful vehicles capable of taking over planets. Led by head bad-guy Saw Boss, they spread their evil seeds from planet to planet, ensnaring them with their vines and overrunning them with clone Monster Minds. He also created a root that could destroy them, but disappeared with his half of the "cure." Thus, the only thing that can stop them is Jayce's team of vehicles, the afore-mentioned Lightning League (which I guess explains why it's called Jayce and...the Wheeled Warriors?)

Of course, you can't have a bunch of vehicles and just one driver (even if Jayce can control them all by voice.) So Jayce is saddled with easily one of the worst team of heroes ever assembled, including Herc Stormsailer, a carbon-copy of everyone's favorite formerly-frozen-in-carbonite mercenary space pilot. Seriously, he couldn't be more of a rip-off if he shot Greedo in the fourth episode. Beyond that, he's aided by Oon, a scaredy-cat animated suit of armor, Flora, an empathic plant-child, and Gillian, a wizard who seems more adept at computers than spells. If you compiled a list of the times they actually helped Jayce and took away all the times they left him in trouble, the team has a definite losing record. They are far more effective as comedic relief.

Animated in an anime-influenced take on the prevalent style of the time, and featuring two very-80s theme songs, the show followed the continuing storyline about the search for Audric, via each episode's adventure. Led by J. Michael Stracynski (Babylon 5) on the writing side, the show presented a decent take on the sci-fi standard of the intergalactic traveler, with each planet having its own unique element, even if each episode followed a bit close to formula, with at least two big battle scenes, the looming threat of Saw Boss, who never actually does anything, and an ending that sees the heroes able to share a laugh. The writing is actually more advanced than the majority of the cartoons of the time, at least from a plot perspective, though the dialogue, including the awful "wit" the characters display, can be brutal at times.

Honestly, no adventure stood out more than any other, in part because of the formulaic plots. The only real difference is the kind of planet they land on, and the kind of people they find there. It's certainly not the Monster Minds' plans, which never stray far from land, spread vines and fight Jayce. Also not working for the show is how easily defeated the bad guys are. You never really get a sense that Jayce is in any real trouble, no matter how many times he's double-crossed by someone supposedly in trouble. In one episode, the engines on the Lightning League's ship are damaged, and Gillian says they are done in. Less than a minute later though, he just waves his hands and everything's fixed, killing any drama. It's just one example of the need for a better sense of pacing and a more balanced tone, though the kids watching probably won't care too much, thanks to all the action and silly comedy. 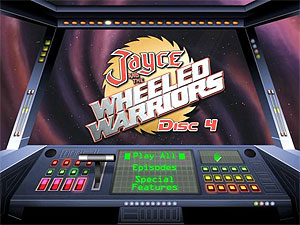 The DVDs
The first 33 episodes of the series are spread over four DVDs, averaging eight per disc, which are packed into two clear, dual-hubbed Thinpaks, featuring two-sided covers with a nice spread of art on the inside. The Thinpaks are packed in a cardboard slipcase. The discs feature slightly animated full-frame main menus with options to play all the episodes, select shows and check out special features where available. There are no audio options, no subtitles and no closed captioning.

The Quality
The full-frame transfers on these episodes is surprisingly good, with vivid color and a rather crisp image. Some minor bits of dirt and damage can be seen throughout the set, though it's not overly distracting. Overall, it looks pretty nice for a show of its age, and there's no noticeable digital artifacting.

The Dolby Digital 2.0 tracks on these episodes are solid examples of mid-'80s animation sound, with clear dialogue, strong music and nice sound effects, with everything delivered right down the middle. It's utilitarian, but you can't expect much from an animated series from 1985.

The Extras
There's just a few extras here, but they should appeal to fans of the series, starting with the manual slideshow of concept art for the show. Alternate versions of the show's logo, with the show's original name, and different concepts for the main characters and villains give a welcomed look at the show's origins.

The other extras are a pair of PDF scripts, one for the show's pilot, by Haskell Barkin, and one for the series' third episode, by Straczynski. The Barkin script uses the show's original name and characters, while Straczynski's is more in line with the series as it stands. They are worth checking out while watching the episodes, to see how the animators interpreted the script. 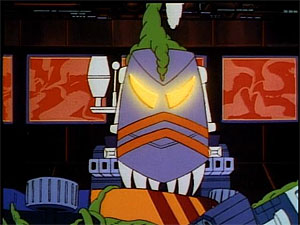 The Bottom Line
Though my personal level of nostalgia for Jayce and his Wheeled Warriors was pretty high heading into this set, it may have been more of a memory of the toys than the shows. The series isn't bad, but it's very uneven, and a bit repetitive to boot, a fact made abundantly clear when watching 33 episodes in a bunch. Of course, fans of sci-fi and fantasy adventures may get a bit more enjoyment out of it. The DVDs look and sound better than you'd expect for a show that's over 20 years old, and the few extras are interesting enough to add some value to the set. The children of the '80s may enjoy revisiting this lesser-known animated relic, but keep your expectations low.