Shuffled from a quick shooting schedule to post-production to theatres in a shroud of secrecy, Matt Reeves' Cloverfield (2008) created plenty of buzz upon its release last January. Hidden beneath fake name titles like Cheese and Slusho, the as-yet-unknown monster movie spared no expense in making sure the final cut arrived with a bang. Having seen the film's mysterious trailer before last year's so-so Transformers, it immediately caught my attention as something worth looking into. I wasn't alone, of course: curious fans were intrigued by the film's viral marketing campaign and reluctance to reveal what Cloverfield was all about. For the most part, we only knew that it was big, scary and would be arriving soon. Surprisingly enough, when it did arrive...it actually scored big with audiences and critics alike. Go figure.

Here's the setup: twenty-something Rob Hawkins (Michael Stahl-David) is given a surprise going-away party after landing a prestigious job overseas. The Manhattanite has got obvious feelings for Beth (Odette Yustman) after their rendezvous a few weeks prior, but she shows up to the party with another guy. Rob's pal Hudson (T.J. Miller) attempts to cheer him up while recording well-wishes from the crowd...though "Hud" also has his eye on Marlena (Lizzy Caplan), who barely knows Rob but was invited anyway. Also attending are Rob's brother Jason (Mike Vogel) and his girlfriend Lily (Jessica Lucas); the latter is perhaps the most level-headed in the bunch, which could be why she did most of the party organization.

All this yuppie-grade drama is pushed to the background, of course, when the apartment shakes and power flickers off for a moment; the kids are terrified, so they scramble towards the TV and windows to see what caused all the commotion. This is no "earthquake" as early reports suggest, especially after a massive explosion in the city sends fiery debris their way. Fleeing to street level, the party-goers witness more chaos and destruction; eventually, some folks get separated in the fray. What exactly caused all the panic doesn't really matter at the moment; they've just got to find each other and get to safety before Manhattan crumbles.

This story is told from a narrow perspective: like The Blair Witch Project and its ilk, all the spookiness is captured on a single camera (in this case, the one Hud carries around dutifully)...so whether we like the characters or not, we're stuck with them for the duration. Our heroes are likeable enough, yet I'll admit that the well-to-do Starbucks and sushi crowd---in their fancy Manhattan apartments, no less---isn't really my environment of choice. This is perhaps a testament to Cloverfield's effectiveness, however: no matter if you have a trust fund or not, the over-the-top events of the film unfold in a chaotic but believable manner. 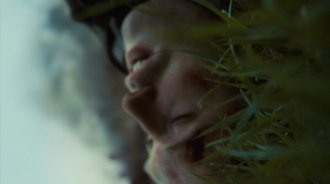 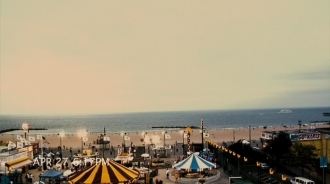 The Blair Witch style of presentation isn't the only thing that separates Cloverfield from typical monster movies, but it's certainly the most noticeable difference. Some viewers may rightfully become disoriented at times: after all, Reeves' film takes the Paul Greengrass approach and amplifies it substantially. Yet such a stripped-down atmosphere doesn't hinder the film at all; instead, it reminds us that Steadycams and sweeping crane shots aren't necessary to tell an exciting story. Taking their cues from viewer-driven video websites like YouTube, the crew of Cloverfield certainly had the means to hold the camera steady...but they really wanted to inspire audience members without immediate access to fancy equipment.

Adding to the "kitchen table" effect is the exclusion of a traditional score...save for the occasional bit of background music, of course. Instead, our ears are simply treated to a chaotic, creepy audio mix---developed and executed, in part, by Skywalker Sound---that magnifies the tension considerably. The end result is just as enveloping as the visuals themselves, yet the sum of these parts holds our attention from start to finish. We really feel as though we're part of the action...and during a suspenseful film, can we really ask for more?

Presented on DVD by Paramount Home Entertainment, Cloverfield manages to bring plenty of scares to the small screen. The stripped-down visual presentation and enveloping audio mix have been preserved nicely, while a number of interesting bonus features support the film well. All things considered, it's a solid package that fans should certainly enjoy. Let's take a closer look, shall we?

Presented in a 1.78:1 widescreen aspect ratio and enhanced for 16x9 displays, Cloverfield looks excellent, given the circumstances. The moderately filtered and degraded image preserves the film's intended look, while black levels and image detail are quite solid in most cases. A very mild amount of edge enhancement can be spotted during a few sequences, though other digital imperfections are clearly part of the source material. Overall, this is a terrific visual presentation that fans should enjoy.

For obvious reasons, let's ignore the fact that such a crisp and thunderous soundstage could never be captured on a "consumer-grade" camera. This Dolby Digital 5.1 Surround mix (available in French and Spanish dubs) is dynamic and immersive, putting us smack-dab in the middle of the action. Dialogue is generally clear and easy to understand, rarely fighting for attention with background noise...and only when appropriate, of course. Optional English, French and Spanish subtitles are provided during the main feature and nearly all of the extras. 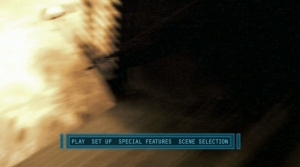 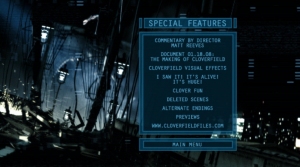 Seen above, the appropriately tense menu designs are basic and easy to navigate. The 84-minute main feature has been divided into 16 chapters, while no obvious layer change was detected during playback. This one-disc release is housed in a standard black keepcase and includes no inserts of any kind. Interestingly enough, this promotional screener copy arrived in an oversized "archival tape" case, further accenting the film's top-secret tone. Spooky!

Bonus Features
They might look a bit standard on paper, but the included extras prove to be quite entertaining and informative. Leading things off is a feature-length Audio Commentary with director Matt Reeves, who previously worked with producer J.J. Abrams in creating the television series Felicity. Reeves delivers quite a fast-moving track, which contains only a few moments' worth of silence during the film's 84-minute lifespan. The director speaks about Cloverfield's brisk shooting schedule (which spanned just over a month), as well as the unique format and mixture of live action and green-screen backgrounds. Interestingly enough, Reeves also expresses a bit of regret about how the apartment "rescue sequence" turned out visually, which I noticed during my first viewing and completely agree with. Overall, this is a fine commentary worth listening to.

"Document 1.18.08: The Making of Cloverfield" (28:17, below left) provides an up-close and personal view of the film's relatively short production, taking us behind the scenes of multiple set locations and post-production facilities. Director Matt Reeves and producer J.J. Abrams are joined by select members of the cast and crew, who comment about the overall experience and top-secret nature of the shoot as it unfolds. This is an interesting enough piece---and though a few key sections are glossed over, they'll be explained in more detail soon enough.

Up next is a pair of related featurettes, beginning with "Cloverfield Visual Effects" (22:31, below right). This obviously expands on the computer-aided aspects of the production, mainly the aforementioned green-screen background sequences and creature designs. It's surprising to learn exactly what was added in post-production, even during some of the more conventional sequences. On a similar note is "I Saw It! It's Alive! It's Huge!" (5:52), a shorter piece focusing solely on character design and development (especially the chief baddie, nicknamed "Clover" by the production team). Peppered with glimpses of 3-D models and early puppet designs, this will be of great interest to more visually-minded fans. My only nitpick relates to the numerous mentions of Godzilla as an obvious inspiration, yet King Kong is casually brushed aside. Gorillas need love too. 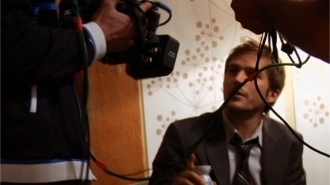 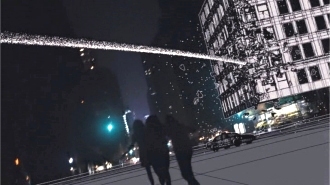 Winding things down is a selection of unused footage, beginning with "Clover Fun" (3:59). This short compilation of flubbed takes---nearly all of which takes place at the going-away party and Beth's apartment---is relatively lightweight, but still worth a look. Also here is a handful of Deleted Scenes (4 clips with optional director commentary, 3:35 total), which include a few lighter moments and extended takes. They were rightfully trimmed from the final cut, though one could argue that the party sequence still runs a bit long. Our last film-related extra is a pair of Alternate Endings (2 clips with optional director commentary, 4:36 total), which turns out to be fairly disappointing; in short, they do little more than alter the final few seconds of "flashback footage".

Also included are Previews for the upcoming theatrical releases of Star Trek and Indiana Jones and the Kingdom of the Crystal Skull, though Cloverfield's excellent trailer is nowhere to be found. All bonus features, save for these previews, are presented in anamorphic widescreen and include optional English, French and Spanish subtitles. This shouldn't need to be mentioned, but it's good to see such care taken with every aspect of a DVD release.

Packed with plenty of thrills, chills and suspense, Cloverfield is a claustrophobic monster movie crafted with care by true fans of the genre. The guerilla-style visual approach---unfairly regarded by some as a cheap production gimmick---does wonders for the admittedly stripped-down atmosphere, while attention to detail and the lack of a traditional score enhance the experience even further. This "budget blockbuster" also plays fairly well on the small screen...thanks in part to a careful DVD treatment by Paramount, which pairs a solid technical presentation with a handful of entertaining, informative bonus features. It's at least worth a rent for even the most jaded followers of horror and suspense, but most fans will want to make permanent room on the shelf for Cloverfield. Firmly Recommended.