The Movie
In the early 1980s, my first viewing of Jaws was enough to prevent me from stepping foot into any ocean ever again. Shortly thereafter, watching Psycho prompted me to forever lock my bathroom door if I was alone in a secured house with even just a dog. And last week, after watching Teeth...well, let's just say I've never been happier to be a gay man.

Yep, this is that mutant vagina movie. I'm sure some would call it a Vagina Monster, although in reality it's more of a Vagina Superhero. Whatever the case, you better get comfortable with the word "vagina", because you'll hear it a lot--both in this review, and in the movie. Go ahead and say it 10 times slowly. I'll wait...

This dark comedy--I hesitate to classify it as a true horror film--has a lot of fun exploring an ancient myth in modern times. Dawn (Jess Weixler) discovers at a very young age that something is a little different about her. And she quickly represses herself, in part by joining The Promise, a teen abstinence group that stresses purity. That makes it especially challenging when she starts to have feelings for born-again virgin Tobey (Hale Appleman). Their courtship draws parallels to Adam and Eve, ending in tragedy for Tobey after he pushes his temptation a little too far (after one of my favorite admissions in movie history: "I haven't even jacked off since Easter!").

And it's not like Dawn has the happiest home life, either. Her mom is sick, possibly the result of those ominous, phallic nuclear cooling towers that hover behind her house. Even worse is having to live with stepbrother Brad (John Hensley), a tattooed, mutton-chopped bad boy who listens to a lot of heavy metal music, has a pet Rottweiler he keeps in a cage--and has developed an affinity for asses, the result of a painful childhood curiosity for his stepsister that left his finger scarred.

Dawn quickly does some research and discovers the myth of vagina dentata (Latin for "toothed vagina"), which springs from a primitive masculine dread of the mysteries of women and sexual union. It's a myth created by men, playing on fears of weakness and impotence. Men are supposed to take an epic journey back to the womb--the "dark crucible" that hatched them--to become a hero and conquer the enemy. But writer/director Mitchell Lichtenstein turns that myth on its head, and the result is a bloody hysterical jolt of female empowerment.

It's clear from the opening scenes that this story plays out as a cautionary fairy tale, a self-aware spoof of exploitation films with exaggerated characters and performances, and a plot worthy of Greek mythology. There are a number of influences at work: It's sort of like Tim Burton crossed with John Waters (think Edward Scissorhands meets Serial Mom), mixed with elements of Carrie and Jaws, with I Spit on Your Grave and Hostel 2 thrown in for good measure.

This is one of those movies you hear about and can't believe got made, like Bobcat Goldthwait's Sleeping Dogs Lie (aka Stay). On the surface, it sounds like a stunt movie destined to fail, but there's a surprisingly powerful message that creeps through. More importantly, it's damn funny, including an intercom scene that had me (and poor Ryan!) in stitches, and perhaps the funniest gynecological exam I've ever seen on film (okay, it's the only one I've ever seen, but it was still a riot), thanks in part to the perfectly cast Josh Pais as Dr. Godfrey.

Lichtenstein has his tongue planted firmly in cheek: look for brief snippets of such classic influences as The Black Scorpion and The Gorgon; a horde of phallic and vaginal symbols (check out that tree!); some hilarious aerial surgery shots; snake references; a final showdown that pays tribute to classic westerns, sprinkled with a dose of Quentin Tarantino girl power; and (can you believe it?) a perfectly placed song by Ella Fitzgerald(!). And Dawn's last name? O'Keeffe. As in Georgia. As in flower paintings that look like lady parts (which appear on Dr. Godfrey's exam room wall).

The director is aided by a fantastic score from Robert Miller, who channels the best of Danny Elfman and Bernard Herrmann, and an effective title sequence that sets the tone of the film perfectly. And he gets a spirited turn from Weixler, who won a Special Dramatic Jury Prize at the 2007 Sundance Film Festival for her "juicy and jaw-dropping" work. She gives a brave performance that transforms with her character, gaining steam as Dawn gets more comfortable with her gift.

As for the horror fans out there, like myself? It's gross, for sure, with just enough bloodletting to make you cringe, but this is a comedy first. So don't watch this expecting to be scared...unless the sight of severed penises is enough to make you scream.

Video:
Presented in an anamorphic 1.85:1 transfer, Teeth looks stronger in some shots than in others. This is a low-budget film, and some shots show plenty of grain, more noticeable in close-ups of faces and shots with large, monochrome backgrounds. Some shots also look sharper than others. It's not going to rock your TV screen, but it's not going to damper your enjoyment of the viewing experience.

Audio:
The audio track comes in Dolby 5.1 sound, with optional English and Spanish subtitles. There's very little use of rear speakers, even in the few scenes that would benefit from it, like a rainstorm. The bigger issue is the fluctuating volume of various characters' voices within the same scene. Sometimes one person sounds fainter than their co-stars, as if certain tracks had to be rerecorded and added in...it makes some scenes sound slightly separated. But you're not watching this to be blown away by the sound, which is still strong enough to enjoy the film. 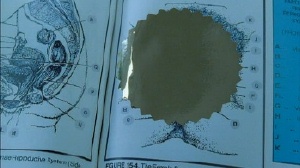 Lichtenstein provides a feature-length audio commentary, which might have been a tad more fun if he had someone with him to bounce off of. He isn't talking non-stop, instead speaking just when he wants to say something. The writer/director provides plenty of fun tidbits about the filming process, including the resistance he met from some people in Austin, who thought he was filming a porno. He also touches upon a lot of the imagery and symbolism that you may miss (I didn't even notice Dawn's unicorn t-shirt!), and shares fun facts about the music used and some of the plot's inspirations (apparently, a school district in West Virginia really did cover up a female genitalia diagram--but not the penis--in high school biology books). And for unaware guys like me, you'll learn that there actually isn't something called a "flexibility test" when you're strapped into the exam chair (oh, you lecherous Dr. Godfrey!).

Up next is a behind the scenes feature (28:47), with interviews with a lot of the cast and crew, including Lichtenstein, Weixler, production designer Paul Avery, director of photography Wolfgang Held and prosthetic effects supervisor Doug Field. He briefly explains the science behind creating severed penis effects, which was actually more disturbing to me than the scenes themselves (Hawaiian Punch never looked so repulsive). This half hour is a good supplement, although I wish we heard more about the challenges of marketing the film.

There are five deleted scenes (4:10) with optional commentary, three of which were understandable omissions. I found the mall scene to be fun, and the quick hospital scene with Dawn was enough for a brief chuckle. Rounding out the features are two trailers for the film, with additional trailers before the feature.

Final Thoughts:
This is a gruesome film about a woman with a really powerful vagina. You probably already know if you're up for it or not. Says production designer Paul Avery: "It's dealing with something that most people will find quite hard to stomach." And in the wise words of Dawn's creepy stepbrother Brad, "This is too fuckin' weird." It's refreshing to see something so daring and original handled so well, and there's heavy replay potential here--I imagine this will gain a huge cult audience on DVD. This movie works--not as a horror film, but as a low-budget dark comedy with bite. It has a point of view, and enough campy laughs and blood to please those willing to take the plunge. If you are, I advise you to enjoy the fun and snatch it up. (Sorry, I couldn't resist...). Highly Recommended, but not for everyone. 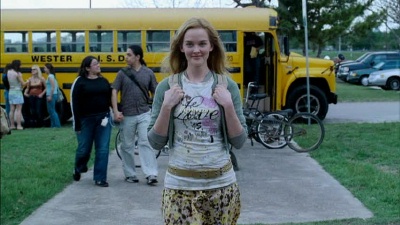