Adventures of Baron Munchausen, The

Sony Pictures // PG // April 8, 2008
List Price: $28.95 [Buy now and save at Amazon]
Review by Daniel Hirshleifer | posted May 5, 2008 | E-mail the Author
The Movie:
Terry Gilliam was once the odd man out in the Monty Python comedy troupe. Working mostly on bizarrely hilarious animations that acted as bridges between skits, Gilliam would occasionally act on screen; but he certainly wasn't as instantly recognizable as Cleese, Idle, Chapman, Jones, or Palin. However, when the group split, it was Gilliam who rose to the highest level of prominence. Sure, the other members all had their levels of success, and none went wanting. But Gilliam went from animator to film visionary, crafting some of the most visually stimulating films of the last thirty years. Works like Time Bandits, Brazil, 12 Monkeys, and Fear And Loathing In Las Vegas are both visual marvels and great stories. It hasn't all been rosy, though. Gilliam had a well documented feud with Universal over the release of Brazil, and has seen several projects collapse, some of them after production had already begun. Perhaps the most famous of his misfires is The Adventures of Baron Munchausen, which suffered from an ever-inflating budget and an anemic theatrical release.

John Neville plays the titular Munchausen, a 17th century aristocrat who has unbelievable adventures around the globe. He's aided by a motley crew of henchman: Berthold (Eric Idle), the fastest man alive, Gustavis (Jack Purvis), a dwarf with a powerful pair of lungs, Adolphus, an extraordinary sharp-shooter, and Albrecht, who is super strong. When Munchausen's brand of mirth results in angering a Turkish Sultan, Munchausen finds his town under seige, and with the help of a young girl, Sally (Sarah Polley, later to be seen in the remake of Dawn of the Dead), Munchausen must make one last incredible journey to save the town...and stave off death.

The Adventures of Baron Munchausen is emblematic of all that makes Gilliam's work so arresting, while also harboring all the elements that makes his output so mercurial. The visual imagery is opulent and gorgeous. From the war torn streets of the town to the grand ballroom of a god, from the sparse lunar landscape to a fish the size of an island, the film is filled to the brim with pleasures for the eye. Gilliam's imagination is on full display, and the film's massive budget allowed him to put many of his grander fantasies on the screen for the world to share.

The cast is also quite a collection. Neville is wry and sprightly as Munchausen, ever the kid at heart. His henchman are surprisingly underplayed. Despite having incredible abilities, most of them are soft spoken and defer to Munchausen in all things. The biggest exception is Eric Idle as Berthold, who is generally animated, although less so than he's been in other roles. Sarah Polley is appropriately cheeky as Sally, and she is generally the one who maintains the film's forward momentum. The film is rife with celebrity cameos, from the inspired (Jonathan Pryce as an unbearably stuffy bureaucrat, Uma Thurman as the goddess Venus), to the disastrous (Robin Williams scenery-chewing turn as the King of the Moon), to the simply surprising (Oliver Reed, anyone?).

The film also displays Gilliam's penchant for excess, which, in this case, led to a massively overinflated budget under which the project floundered. And while the results of the money are often right on the screen to see, so is the outcome of all the stress and fighting that went on behind the scenes. The picture is very scattershot and episodic, and the connecting tissue isn't solid enough to make the transitions from one story to the next work. Ostensibly, all of the various elements are part of the larger plot, but Gilliam is never able to weave everything together into a cohesive whole. Compare this to Brazil, which was much more single minded in its focus, but still allowed Gilliam the freedom to hit a wide range of targets.

The other problem is that in a world of artificially heightened emotions such as Gilliam creates in Munchausen, the traits of the characters have a tendency to grate on one's nerves. Munchausen's continual childlike demeanor often descends into petulance. His smug attitude of superiority also does little to endear the audience to him. Sally too often becomes one note, simply repeating her mantra of "the town is in danger, remember the town!" Robin Williams' performance is the worst part of the picture: a hammy affair that shows off all of Williams' most boorish tendencies. According to Gilliam, Michael Palin was originally slated to appear in that role, but the studio felt Williams would be a bigger box office draw. Gilliam should have stayed the course on that one, because Williams inclusion brings the film to a grinding halt.

Again, The Adventures of Baron Munchausen isn't bad, just flawed. It's not a good primer for Gilliam neophytes, but those who wish to dig deeper into his catalogue, there are plenty of treasures to uncover. Between Gilliam's unwavering ability to bring the fantastical to life, and the generally excellent cast, there's a lot to enjoy about Munchausen. 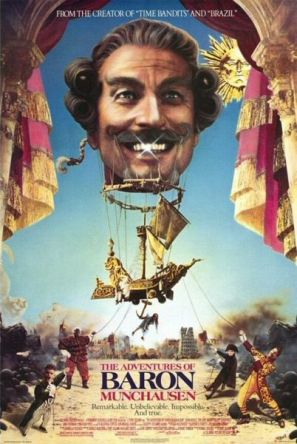 The Image:
Sony presents The Adventures of Baron Munchausen in its original aspect ratio of 1.85:1 in an AVC-encoded 1080p transfer. For those used to seeing Munchausen on cable, or even the previous barebones DVD, this Blu-ray will come as a revelation. The details are much improved, with all kinds of little things popping up that I'd never noticed before. And with an image-heavy director like Gilliam, that can only be a good thing. There are no problems with artifacts or other compression hiccups, either. But the film was made in 1989 and is beginning to show its age. The image isn't consistent, being sharp and detailed in one shot and soft in the next. The optical effects in the picture have also not aged well, and the process always made even new film look dirty. This is easily the best the film has ever looked on home video, though. The flaws are in the source, not the compression.

The Audio:
Sony offers a lossless Dolby True HD 5.1 mix in both English and French. The audio sounds even more dated than the image looks. The fidelity of the original records is thin and dry. The soundstage feels artificial. You can tell the mix was engineered from two-track recordings. The bass channel is weak and trembly, and audio pans are abrupt and too noticeable. The dialogue is the best part, always clear and easy to hear. One of the weaker Blu-ray audio tracks I've heard lately.

The Supplements:
While Sony hasn't included every single extra from the Criterion Collection laserdisc, it still offers a great selection of material, some of which is brand new and very informative. None of them are in high definition.

The Conclusion:
The Adventures of Baron Munchausen will always be remembered as one of Gilliam's biggest flops, but it's really not so bad. No, it doesn't hit the heights of Time Bandits or display the consistency of Brazil, but Gilliam's visual imagination is on full display here, and that's always worth something. At times, the film can also give way to his worst tendencies, but even those are interesting. This Blu-ray has an improved image transfer that beats any previous home video version, even if it still isn't perfect due to the state of the source material. The best part of the package is a collection of substantive extras, some of which are more entertaining than the film proper. Recommended.