Docurama // Unrated // April 29, 2008
List Price: $26.95 [Buy now and save at Amazon]
Review by Chris Neilson | posted May 10, 2008 | E-mail the Author
It's difficult to make a good documentary about a public health issue. Either the result is insufferably boring or so polemic that the messenger overwhelms the message. King Corn is that rare exception. Inspired by University of California Professor Michael Pollan's book The Omnivore's Dilemma: A Natural History of Four Meals, recent Yale grads Ian Cheney and Curt Ellis decided to make a documentary examining why during the past 35 years corn has moved from being a side dish to being the primary ingredient in the American diet and how corn contributes to the dramatic rise in obesity and Type II diabetes in the United States. The central plot device about which King Corn is organized is one growing cycle for an acre of Iowa corn from soil fertilization, through planting and tending, to harvesting. Around this central plot device, Cheney and Ellis interweave the elements of their larger narrative.

By some extraordinary coincidence, Cheney and Ellis both have roots in the same small Iowa farm town of Greene (pop. 1015). It's on rented farmland just outside Greene that Cheney and Ellis undertake to grow an acre of corn. Though Cheney and Ellis have distant family ties to farming, they are unequivocally city boys with no idea of how to grow food, but they undertake it was great enthusiasm.

The steps in growing an acre of corn, Cheney and Ellis discover, are these: step one, rent the farmland; step two, sign up for a farm subsidy from the federal government and collect the first payment; step three, spread ammonia fertilizer on the soil in March; step four, rent a tractor and plant 31,000 kernels of genetically-modified herbicide-tolerant corn on the acre in May; step five, spray the acre with a powerful weed killer in June; step six, harvest the corn in the Fall; step seven, collect the final direct federal farm subsidy payment, along with any other of a myriad of federal cash payments available.

Though farming can be a labor-intensive vocation, growing one acre of corn takes very little time. For example, it took just 18 minutes to plant the 31,000 kernels of corn on Cheney and Ellis's acre, thanks to modern farming machinery. So between these periodic steps, Cheney and Ellis have plenty of time to head off on various excursions following the story of corn. On an excursion to a Colorado feed lot where cattle are raised for the American dinner table, Cheney and Ellis learn that most corn enters the American diet indirectly through meat. Cattle, designed by nature to consume grass, are, in the United States, primarily fed mashed corn. The corn and close quarters of the feedlot results in lower production costs, but also sick cattle, and dramatically reduced protein and increased fat levels in the meat.

Cheney and Ellis also look into high fructose corn syrup. HFCS has replaced sugar as the primary sweetener in the American diet. Look at the label affixed to industrial food products in the US, from soda and cookies, to bread and salad dressing, and you're likely to see HFCS as a major ingredient. The growing prominence of high-caloric sweeteners in the American diet, largely attributable to the low cost of HFCS, is linked to a dramatic rise in Type II diabetes and obesity. On average, Americans have gone from consuming almost no calorie-dense, nutrient-devoid HFCS in 1970, to more than 73 pounds annually now.

Unable to gain permission to see HFCS made in a factory, Cheney and Ellis try to make their own on a kitchen stove top and in the process put their lives and home in peril. It seems HFCS requires the use of a highly volatile and deadly poison.

Having explored how corn makes its way into the American diet through meat and HFCS, Cheney and Ellis also attempt to explain how technology and government subsidies have gone hand in hand to make cheap corn abundantly available. Thanks to genetic manipulation of corn DNA that allows corn to be planted much more closely and to thrive under heavy sprayings of herbicides, yields increased four-fold in the 20th century. Although such dramatic increases in yield should mean that fewer farmers would grow corn under normal market conditions as supply outpaced demand, federal subsidies to corn growers over the past 35 years have meant an over-abundance of cheap corn and ever increasing ways of pushing more and more corn into the diet, as has occurred with meat and HFCS, for example. 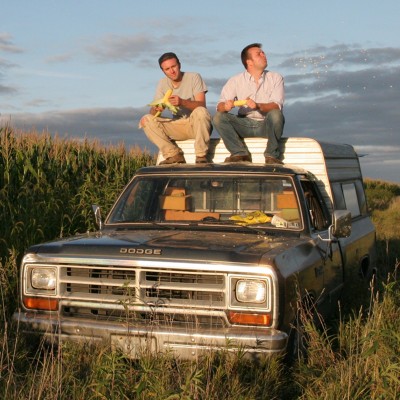 Cheney and Ellis inject large doses of genuine humor into King Corn, but they avoid the scathing humor of Michael Moore (Sicko) or Morgan Spurlock (Super Size Me). They also smartly avoid espousing any criticism directly. What criticism there is comes out of the mouths of the interviewees, most articulately from Michael Pollan, but perhaps most tellingly from agriculturalists and researchers supported by federal corn subsidies. Written by Cheney and Ellis, King Corn is directed by Aaron Woolf (Greener Grass: Cuba, Baseball, and The United States), and principally shot by Sam Cullman on digital video.

Though completed just last year, King Corn may quickly seem dated in the face of rapidly increasing demand for corn. The world has rapidly moved from a glut of corn to a scarcity thanks, in part, to market-distorting government energy laws and programs in the United States and the European Union. The growing specter of famine in large portions of the developing world, and hunger in the developed world, blunt some of Cheney and Ellis's criticisms of longstanding US federal agricultural policies promoting increased yields.

The DVD
The packaging for King Corn has the dimensions of a slimline case but is made from 100% recycled cardboard which is surprisingly sturdy. Rather than slipping into a sleeve which may scratch the disc, the disc snaps onto a tight cardboard hub that securely holds it in place. This is the best packaging of its kind I've seen yet.

The Video:
There is minor aliasing of the image, but overall the documentary looks good for standard DV presented in an aspect ratio of 1.78:1, and enhanced for widescreen.

The Audio:
Dolby Digital 2.0 and 5.1 options are provided. Dialogue sounds fine with minimal dropouts or distortions. The post-production sound, especially the soundtrack make good use of the 5.1 mix. There are no subtitles available on this release.

The Extras:
Extras include a theatrical trailer, some deleted scenes (17:40) which mostly would have diminished the film had they not been removed, comedy skits with Cheney and Ellis (10:40), a music video, a slideshow of production stills, and filmmaker biographies.

Final Thoughts:
King Corn is an entertaining and informative look at why corn has become the primarily component of the American diet and its impacts on the health of American consumers. Though the filmmakers' criticisms of the federal policy of promoting cheap, plentiful corn are undermined by the recent surge in worldwide food demand in the face of other government policies promoting ethanol, King Corn remains highly relevant.

As critics of documentaries like this and Super Size Me note, in a capitalist economy, consumers are ultimately responsible for the food choices they make. But, rather than undermine these movies, consumer responsibility only increases the importance of this kind of films to empower consumers to make better informed food choices.