"We need to confront vague ideas with clear images." - slogan painted on the wall in La Chinoise

"In any case, you need sincerity and violence." - Guillaume (Jean-Pierre Leaud) 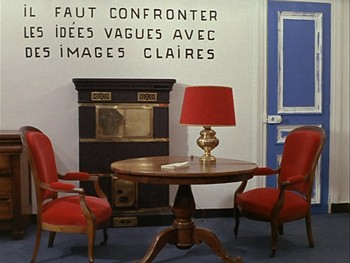 1967's Jean-Luc Godard feature La Chinoise (The Chinese) makes no bones about the director's emulation of agitprop pioneer Bertold Brecht. Not only does one of the main revolutionaries, Guillaume (Jean-Pierre Leaud, The 400 Blows), espouse the benefits of the playwright's political theatre as handily as he praises Chairman Mao, but in one scene, standing before a blackboard filled with names of philosophers, politicians, and other figures of the world stage, Guillaume erases them all except Brecht. La Chinoise is Godard moving agitprop from the stage to the cinema.

The film takes place over one summer, filming five students in their apartment as they use their vacations to form a radical Communist cell devoted to the teachings of Chinese dictator Mao Tse-Tung and his little red book. At the head of this group is drama geek Guillaume and his philosophy-major girlfriend Veronique (Anne Wiazemsky, star of Bresson's Au hasard Balthazar and Godard's wife). They are of the no-compromise, no-retreat variety of activists, while their cohort Henri (Michel Semeniako) is more willing to accept the contradictions of political revolution. This eventually gets him dispelled from the group, though ironically, amongst all the talk of change and fomenting an uprising, Henri is the only one who we know has left the apartment and joined in any action. He first appears onscreen having been beaten and bloodied by Communists loyal to Russia. Of the many ideas tossed around here, one is that Kruschev has done little to maintain a socialist ideal, and that European Communism is pretty much endorsed by Imperialist America, who is more than willing to do business with Soviet countries when it suits them. The true threat of Asian Communism, as it were, is their lack of interest in playing in the capitalist reindeer games of the U.S. Though there is much to disagree with in La Chinoise, there is also much that intrigues and provokes.

For the most part, La Chinoise is a series of interviews, speeches, and debates amongst the cell, who stay in their apartment and endlessly pour over Mao's book, rows of which line every shelf in the place. Cut into the discourse are Godard's trademark title cards and propaganda-like still images, sometimes working in concert with what is being said, sometimes in juxtaposition to it. Some images are even integrated into the scenery, such as when Veronique shares her revolutionary ideas while sitting beneath a collage of pin-up girl drawings. In addition to the polemics about current political events, Godard uses La Chinoise as another treatise on the purpose of cinema, even breaking down the fourth wall, appearing himself as (presumably) an off-screen interviewer and panning around to show cinematographer Raoul Coutard manning the camera. Hell, he even manages to namedrop Nicholas Ray yet again. Has anyone done a count for how many Godard movies make mention of Johnny Guitar? And it still isn't on DVD?!

Though the movie isn't exactly subtle with its politics, it is somewhat difficult to dissect what Godard may be personally endorsing from what he is throwing under the bus in his savage portrayal of the students. While I think the director would love to be able to wholeheartedly embrace a youth movement that supported real social change, he clearly is disenchanted with the all-talk and no-action navel gazing that such activists can engage in. Henri may begin as the character we dislike, particularly when it's revealed that he endorses his girlfriend (Juliet Bento, Weekend) engaging in prostitution to pay the cell's bills as a living example of the disparity between working-class reality and socialist ideal, but by the end, Henri's revealed as the only one with a clear head when he refuses to engage in terrorism. Guillaume also may be slightly redeemed in sticking with his theatrical plan, but there is some suggestion that he may only be in it for the girls. (He eventually splits with Veronique to hook up with Bento's more impressionable character.) Really, there is more sincerity than there is violence here, and for some, probably more vagueness than clarity, too.

The most pungent critique is saved for Veronique, the one most fervently advocating acts of terrorism. On a chance encounter with one of her former teachers, the dissident Francis Jeanson playing himself, she tells him of her violent intentions, and he quickly sees how misguided she is. He damns her with one persistent question: once you have carried out your plan, what next? Veronique obviously has no idea how to fill the hole she wishes to create, and right there is seemingly Godard's major issue with bourgeois politics: they have no game plan for how to sustain the change they advocate. Thus, they spend more time talking about change than enacting it, and when they do jump into the fray, as Veronique eventually does, they screw it up. Which is fine for them, because they can walk away, return to school for the new semester, completely unaffected. Therefore, it's almost better to be the fifth member of the cell, the almost psychotic Kirilov (Lex De Brujin), who kills himself rather than do nothing--or, as it were, finally have to do something, and maybe something that will mean nothing.

As far as Godard's political cinema is concerned, La Chinoise is not necessarily the director's best. It's not nearly as incendiary as Weekend or as successful on its own terms as Tout Va Bien. Even so, he does effectively encapsulate what is often wrong with liberal political movements and their ability to harness youthful enthusiasm without knowing how to apply it, and the director both appreciates the young activists of 1967 even as he exposes their flaws. (Bertolucci has a similar take on the '60s student movement in his film The Dreamers, and even hangs a La Chinoise poster on their bedroom wall.) It's easy to have radical ideas when you, yourself, aren't under any real threat. The middle class can speak for the working class without threatening their own bottom line. In Godard's mind, this is where all Communism has gone wrong, as eventually there will be new leaders to replace the deposed ones.

Of course, charges of ineffectual intellectualism could easily be turned back at Jean-Luc. He is completely aware that one could accuse him of sitting in a vaunted position and making movies rather than joining on-the-ground protests, hence his built-in defenses for cinema. If Nicholas Ray's B-movies could be as effective as a Brecht's overtly political plays as tools for social change, then why not also more enlightened cinema like La Chinoise? When Guillaume starts his theatre, he does take it to the streets, after all, knocking on doors and sharing his ideas and seeing the social reality that surrounds him as he does. Arguably, rock 'n' roll was the more active art of the 1960s, something Godard even saw, hence his coupling with the Rolling Stones a year later.

When it comes down to it, it's not a dispute easily settled, and with Godard's open-ended cinema--Susan Sontag argued that he wasn't making individual movies, but one long, ongoing dialogue--the debate continues. Ironic, in its way, sitting in a room, watching the movie, and then typing about it on a laptop before sending said ideas out into the ether all on their own. Such an endeavor could make me just as deluded as the kids in La Chinoise. And yet, here you are reading it, and the idea passes on. So, maybe Godard's method does work, after all? 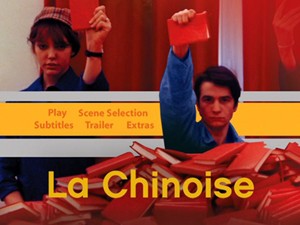 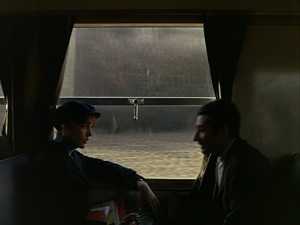 Video:
Koch Lorber has put La Chinoise on DVD in its original 1.33:1 full frame aspect ratio. The transfer here is noticeably better than on its companion release, Le Gai Savoir, particularly when it comes to the solid black screens. I did notice some image ghosting during the film, but not to any great detriment. A decent transfer.

Sound:
The original French soundtrack has been mixed in standard Dolby Digital. The sound is of decent quality, not overly harsh or tonally dissonant. The removable English subtitles are mainly excellent, though sometimes moving a little fast. As with Le Gai Savoir, there are some text elements that remain untranslated and sometimes appear to shave a layer off of the discourse, but it's not nearly as big of an issue here as it was there.

Extras:
A new video précis on La Chinoise from Godard scholar Colin MacCabe kicks off the bonus section, with the author talking about various aspects of the film (7 minutes, 30 seconds).

The rest of the features are vintage clips, including two of Godard: one a promotional piece from his editing bay while finishing the film (2:40) and another from the press conference to present the movie at the Venice Film Festival (2:00). Both feature the auteur explaining his intention in making La Chinoise, as well as some of his influences. The final pieces catches up with Anne Wiazemsky in the 1980s (7:20), and it features the actress discussing the experience of shooting the movie while also being engaged to Jean-Luc, her assessment of their work together and Godard's 1970s output, and his relationship with her grandfather, the author Francois Mauriac, who had very different politics from her husband.

There is also the trailer for La Chinoise and a short text piece advertising Le Gai Savoir.

FINAL THOUGHTS:
La Chinoise is a stridently political drama from Godard's later '60s period, interested in ideas more than it is storytelling. Telling a kind of parable about a group of idealistic but misguided students enamored of the teachings of Chairman Mao, La Chinoise both makes a case for stronger socialist change and against empty proselytizing. Whether it succeeds as an effective critique or ends up being an example of what it hopes to tear down is likely one of those divisive questions that film fans could debate endlessly. I found it successful as polemic, but not necessarily a joy to watch as cinema. Still, Recommended. The craft is worth watching, and the ideas still relevant, even if the "narrative" is a bit dry. A bit easier going than Le Gai Savoir, at any rate. 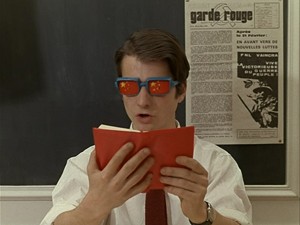 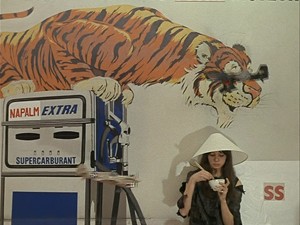