R U Invited? 5 Guys And A Sex Party

The Movie
It's been nearly two years since this low-budget indie debuted at the 2006 Out Takes Dallas Gay and Lesbian Film Festival, but the timing may be just right for this release after a highly anticipated summer film renews the public's interest in dirty talk. Just imagine a gay Sex and the City with three Samanthas, and you get the idea.

Sex is thrilling. Sex is empty. Welcome to R U Invited?, an exploration of how sex affects the lives of five gay friends during one night of revelations. This is true amateur filmmaking--you won't find flashy settings, special effects, big stars or high quality production values. But beneath the (unnecessary) eye-catching title lies a well-scripted buddy movie that explores themes that are sure to resonate with a large number of gay men--and others willing to take the journey.

The central figure in the story is Ben (John de los Santos), a young hunk who lives in the big house of his "daddy" boyfriend, the much older Anderson (Phil Harrington). The two fill needs for each other, but Ben is clearly free to play. One of his best friends is Charlie (Christopher Jones), a bitchy bundle of energetic innuendos, zingers and sarcasm who relishes being a troublemaker. Charlie heads to Ben's house after leaving a trick broken hearted ("Do you even remember my name?" asks the conquest. "Of course I do," responds Charlie. "It was HotTwinkBottom, right?"), and alerts Ben to a sex party ad online.

Soon joining the duo is Ben's friend Gordy (Oscar Contreras), recently separated from his boyfriend. Gordy thinks he might be too clingy, and self-confidence problems start to show ("I was suffocating him and he was kind enough to tell me"). Charlie and Gordy instantly clash, with the instigator taking shots at Gordy's defense mechanisms--and his less-than-chiseled body ("If Gordo gets an invite, I'm not so sure I want to go...").

Not surprisingly, there's lots of sex talk, which accounts for a large portion of the film's laughs--like Ben's technique for getting the best online photo ("I want you to take a really deep breath!"), a tragic group sex story, an argument over poppers--and a hilarious comment over a potential sex change operation that was delivered with the timing and skill of a comedic pro. And then there's Ben introducing Gordy to the importance of...uh...let's say cleanliness. ("What are you confused about?! You put the bear in your ass and you squeeze it accordingly!") The humor here comes from a surprisingly realistic script; there's nothing exaggerated or campy about how it's presented (with the exception of one scene that I'll get to later), no intent to make this an escalating gross-out contest.

But there's a lot more here, like musings on love, happiness, friendship and fidelity ("Let's define cheating," challenges Charlie. "You ever heard that theory about the tree falling in the woods? If there's no one around to hear it..."). And of course there's the struggle for self-worth and acceptance that virtually every gay man goes through. Despite the film's sexual slant, there are some emotional moments from a script that is clearly based on experience, a credit to writer/director Israel Luna (who has a brief, non-speaking cameo in the film). It will make you think, and I'm betting most viewers will see a little of themselves somewhere in the performances.

The characters are sometimes slightly exaggerated, but these types of guys really do exist. Even if you aren't exactly like any of these men, you know someone who is. When the gang just hangs and talks, it's instantly relatable. The believable dialogue has nice flow, and for the most part the performances are solid. Ramirez (also known as Gabriel Praddo, who could "baby" his way into your heart/pants in a second) and de los Santos are the most natural (who knew? Pretty boys can act!). Jones may have his dial turned up a little high as the quintessential queer, but he never enters the (still funny) Jack McFarland world of extreme exaggeration.

The toughest roles belong to Matherly and Contreras, who aren't quite as convincing when required to reach lower emotional extremes. As Jason, Matherly is given the biggest acting challenge. He comes across a little too obvious in his discomfort at times; it would have been more effective if he underplayed it a little, lending more credence to his friends' ignorance. But he shines in many scenes, including my favorite of the film--his argument with Charlie. Contreras is the voice of reason, verbalizing the thought bubbles that most of us would have in the same situation. He is successful most of the time, although some of his more potent line deliveries feel a bit rehearsed.

I had two problems with the film. I took issue with a plot development at the end, an unnecessary twist that I didn't buy at all. But that's minor; my big gripe is the ridiculous scene with Helen Bedd (Chase Wade), Charlie's drag queen boyfriend. He storms into the house for a Mommie Dearest-inspired monologue, staring directly at the camera. A wire hanger? Calling for an ax? "Don't f!#$ with me, faggots!"? *Yawn!* That's so tired. It is jarringly out of place with the rest of the film, and the tone completely changes for an agonizing five minutes. Remember that scene with Mink Stole from Another Gay Movie? It was deleted for a reason.

I'm also not sure what the filmmakers were thinking when they picked the title. Okay, I do know...sex sells, especially with the dick-addicted, body-obsessed, lonely gay consumer, right? (Please sense my sarcasm...) It's a shame, because I imagine the slightly silly title will turn off a number of people--or disappoint those expecting softcore porn. Yes, the movie addresses adult subjects (particularly pertaining to gay men) that aren't for everyone, but there's a lot more to this little movie than that. Some thought-provoking moments await for those who give it a chance, like Mondo's last scenes--which were powerful, a memorably emotional stamp of authority on the film.

Video:
A screener disc was provided for this review, so a final word on the quality is uncertain. What we had was a non-anamorphic widescreen presentation (which looks like 1.85:1). This is low budget and looks like it, with plenty of grain and little definition or detail. But it works with the material, and never detracts from the story.

Audio:
We also can't give you a final word on the sound. It looks like 2.0 stereo is your only option, which works just fine for the dialogue-driven film.

Extras:
The screener disc for this review didn't even have a menu, much less any extras. Any necessary updates will be provided if we get a revised copy. 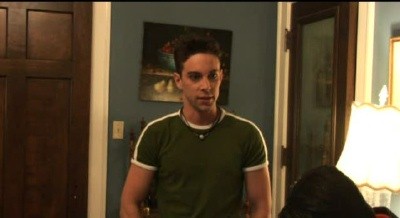