Zipporah Films // Unrated // Region 0
List Price: $29.95 [Buy now and save at Zipporah]
Review by Stuart Galbraith IV | posted May 18, 2008 | E-mail the Author
Some documentaries are designed primarily to educate, some to persuade and others, like Frederick Wiseman's Domestic Violence (2001), to show. In a current field of documentaries littered with socio-political treatises from opposite ends of the political spectrum, Wiseman's long but uncluttered film is refreshingly distilled and essentially apolitical. Domestic Violence's subject is The Spring of Tampa, a large shelter for battered women (and, albeit rarely, men) along with their children. The film does nothing more or less than present illustrative vignettes, typically running eight-ten minutes apiece, of practically every facet of life inside the shelter from the perspective of the abused women, the kids, and the various case workers and administrators.

The three-hour and sixteen-minute film debuted on the festival circuit before turning up on PBS. The two-disc DVD is probably best experienced over two nights, which is how this reviewer saw it. The first disc runs 100 minutes, with disc two the remaining 96. 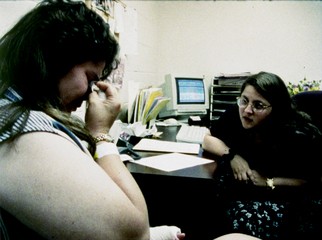 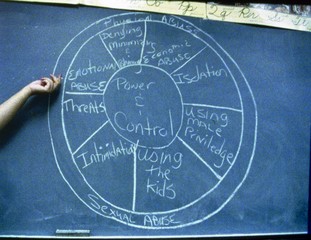 Domestic Violence opens with picture postcard shots of idyllic Tampa, Florida, with its shiny GTE skyscraper, its sparkling car dealerships, palm trees and clear blue skies. But like everywhere else, Tampa Police are responding to calls of domestic violence, typically men under the influence of drugs or alcohol, men who as children were often physically, psychologically, and/or sexually abused themselves.

Wiseman doesn't linger too long at the crime scenes. It's enough to see one woman covered in her own blood, punched so hard in a blow upside the jaw that her own teeth have cut one side of her face wide open. As she gradually comes out of the initial shock of being beaten she realizes that her shoulder, probably dislocated, hurts really bad and she's soon screaming in agony.

Except for a cyclical-like coda at the end the rest of the film, about three hours worth, was filmed inside and on the grounds of the shelter. Woman are interviewed in exhaustive detail during the admitting process, group therapies are shown at length, a group of little old ladies (presumably potential donors) are given a tour of the facility, a nursery for infants is shown, children are encouraged to talk about their experiences, caregivers meet trying to decide how to handle problematic cases, etc.

After making so many despairing films about public institutions failing miserably to serve its patrons, Wiseman's Domestic Violence is an unexpectedly uplifting film. The counselors, psychologists, and other caregivers at the shelter are genuinely supportive and movingly empathetic toward the women and their children. They ask intelligent questions and suggest reasonable, Real World steps to help get these low self-esteem women out of abusive environments and into proactive and independent ones. Though the law sometimes fails them, and the women themselves often compulsively return again and again to their spouses for further abuse, the film makes plain that the shelter is really going to bat on their behalf, providing them with the tools and training to make major, positive changes in their lives.

Atypically for Wiseman, Domestic Violence pretty much follows the same group of caregivers and abused women from the earliest scenes at the shelter through to the film's conclusion. Perhaps deliberately, Wiseman chose to include one woman who frankly comes off as rather annoying, who talks incessantly at the expense of other, more reticent women. Possibly Wiseman turns to her occasionally as if to add some shading to what otherwise are uncritical, arguably sympathetic portraits, though the film readily acknowledges that some of the women almost certainly will be back in the same situation within weeks of leaving the shelter, and it's clear that the women shown are at varying degrees of self-awareness. Conversely, right there on camera you can almost see little light bulbs clicking on when a few of the women finally "get it." These epiphanies are quite moving yet also bittersweet; one elderly lady turns up at the shelter after no less than 50 years of abuse. (Her husband tried to burn their house down and she had to escape through an open window.)

Beyond the "war stories" the women tell one another, horrifying tales of broken bones, cigarette burns, etc., the most captivating facet of Domestic Violence is simply following the women through the shelter process itself. We've all heard of such places but here we get to see one in such detail that by the end of the picture we almost feel like we've spent a few days there.

Though reportedly shot in 16mm, the full-frame Domestic Violence looks very good; it isn't grainy and the colors are bright and vivid. The film is presented on two single-sided, region-free DVD-Rs produced by Wiseman's own distribution company, Zipporah Films, from whom the DVD can be ordered directly. The mono audio is fine, but there are no subtitle options and no Extra Features.

Though predominantly uplifting, Domestic Violence in the end offers no easy answers. The film returns to the streets for its conclusion, a police call to a home where a Mean Drunk type (he looks like a demented Keenan Wynn) is determined to escalate tensions during a late-night argument with his estranged wife, who has no where else to go. Predictably, he fashions himself as the more rationale of the two when he's obviously anything but. The police officers can do little and the issue is left unresolved, leaving viewers with the nagging feeling that it's all going to end very badly. The cycle of violence continues. A DVD Talk Collectors Series title.