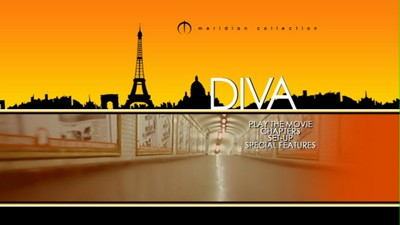 When I was in 9th grade, my French teacher, Mr. Porter, decided to show us Diva over two days of classes, presumably to have us listen to some real French being spoken. Normally, movies in class were great, a way for the teacher and the students to slack off and pretend they are working, but in the case of Diva, I wasn't having it. I guess in my young mind, a film that had subtitles and that began with an opera performance was just not the way to go. I hated it.

Over the years, I had heard tell of Diva's immense reputation, and though at first my reaction was, "Oh, that movie, that's terrible," as time has worn on, my curiosity was piqued. What did everyone see in this 1981 French film that I did not? And given how many movies I did not understand in my youth that I love now, it was time to give it another shot. I missed Diva during its run at my local repertoire theatre earlier this year, but this new DVD christening Lionsgate's Meridian Collection, a line of arthouse and foreign films from their back catalogue, was going to be my chance at last!

Now, having spent the last two hours with Diva, I can say it lives up to neither reputation. It is not the horrible film I thought it was at fifteen, nor is it the untouchable classic others would have me believe. It's closer to classic than it is to trash, no doubt about it, but the good will that precedes this film definitely outweighs the reality for me. 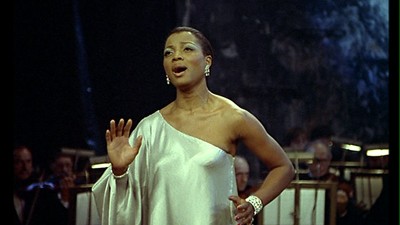 Diva is the directorial debut of Jean-Jacques Beineix, who later gave us that other overrated "classic," Betty Blue. Adapted from a novel by Delacorta (a.k.a. Daniel Odier), it tells the story of Jules (Frederic Andrei), a moped-riding postman who loves opera. So much so, he follows around his favorite soprano, Cynthia Hawkins (American singer Wilhelmenia Wiggins Fernandez), and bootlegs her shows. After her Paris performance, he goes backstage and meets her, and steals her gown from the evening on his way out, causing a great scandal.

The next day, Jules runs into a half-dressed woman staggering out of the subway. She bumps into him, and when he tries to help her, two hoods claiming to be police order him to leave the scene. Little does Jules know, but the girl ends up murdered and a cassette tape containing her confession has been dropped in the side bag of his bike. The tape will expose an entire criminal operation trafficking drugs and girls back and forth from Africa. Thus, when Jules' apartment is ransacked, he doesn't know that whoever did it was searching for this tape, he thinks they are after the dress. Add in a couple of Taiwanese record executives who want the bootleg of Cynthia, and you've got a multi-tiered plot of Hitchcockian proportions.

You've also got some David Lynch-style nightlife, with Jules befriending the mysterious Vietnamese nudie model Alba (Thuy An Luu) and her peculiar benefactor Gorodish (Richard Bohringer). The atmosphere in Gorodish's apartment is just lacking Harry Dean Stanton or Dennis Hopper, or we'd have a Blue Velvet party on our hands. The staging of the various spaces, with carefully chosen props and elaborate art pieces, is confident and specific, though at times pushing the boundaries of pretentiousness.

Jules also meets Cynthia, returning her dress to her, and instantly becomes her closest confidant, which is just one of the many underwritten elements of Diva. Another is the blackmail plot involving the bootleg tape, which is so disproportionate as far as the reality of the situation vs. the reaction to it, it sounds like it was concocted by Dr. Evil. You see, Cynthia has refused to ever release a record, and Taiwan has no copyright laws, and unless she signs a recording deal with them, the Taiwanese gangsters will release her record over there, and then her whole career will be ruined! Not exactly sure how, but that's for others to worry about.

Any backstory about Gorodish and his Lolita sidekick is also gone, though apparently he is the recurring character in a series of Delacorta novels. This would explain why he completely takes over the situation in the third act. Which is fine, because this enigmatic character is one of the best things in Diva. Despite a slow start, the whole film gets going at the midway point, when all the various interests converge and criss-cross and Jules ends up quite literally on the race. Jean-Jacques Beineix and director of photography Philippe Rousselot collectively have a great eye for shooting chase scenes, and a run through the Paris Metro is quite exciting. So, too, is Gorodish's cat-and-mouse game with the killers perfectly put together. 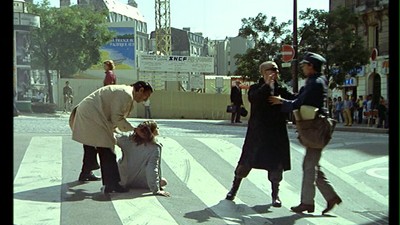 Even so, I can't help but think Diva has aged rather poorly. The acting is often amateurish. Frederic Andrei is at times reminiscent of some of the more bland qualities of James McAvoy, and I wouldn't be surprised if Flea from the Red Hot Chili Peppers saw Domique Pinon as one of the killers in this film and based his entire hyperactive manchild act on him. The most nagging presence in Diva, however, is Vladimir Cosma's synthesized music. Though the 1980s stylings are meant to juxtapose harshly against the classical opera, the score is a time capsule that's contents have gone rotten. Its stink is intrusive and distracting.

Yet, despite my various complaints, Diva is a film with so much going on, it makes it pretty much impossible not to get tangled in its narrative web. I lost count of how many twists and turns there are in the final act, but there are a lot, with just about every dangling plot thread rolled up. The movie also has a lovely, enigmatic ending that puts an attractive enough bow on the whole affair, it does leave the viewer feeling pretty good about the time he or she has just spent. Which is probably why so many people remember Diva fondly. End on a high note, and all the lows tend to fade from memory.

Video:
The 1.66:1 anamorphic widescreen transfer for Diva - The Meridian Collection is of mostly excellent quality, but not without a few glitches. I believe the overall graininess of the picture is just a product of how it was shot at the time, particularly as it increases in the darker scenes. Other problems, though, like flashing spots on the image or flickering backgrounds (the ceiling in the concert hall, the chairs by the lake when Cynthia and Jules are together) look like quirks that didn't get cleaned up in the restoration process.

Overall, though, I'd say it's a nice job, with accurate colors--including the all-important variations of blue and an often metallic palette--and no problems with compression.

Sound:
The original French soundtrack is mixed in Dolby mono. It sounds fairly good, setting a high standard for itself with clear, natural tones. My cat was even fooled once by the sound of birds in the background. Viewers have an option of English or Spanish subtitles. 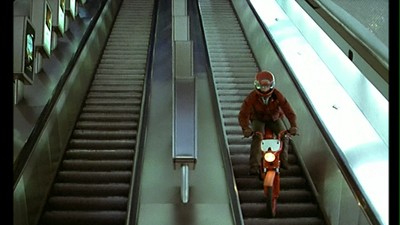 Extras:
There are a fair amount of extras here, and they are broken into two sections.

The co-writer and director, Jean-Jacques Beineix, provides scene-specific commentary. This plays over 7 scenes, which you can either view one at a time or all at once. Beineix recorded the commentary in French, but an English translator speaks over the top of his monologue. By keeping the commentary focused, it means each section is packed with information and doesn't outstay its welcome or lose momentum like a full-length track often does.

There are 10 featurettes that come together under the banner of "Searching for Diva," and you can play them piece by piece or as one program. They are arranged so that they actually do flow as one documentary. The interviews tend to be in French, but instead of subtitles, a translator speaks over the top of the audio (though a different speaker than the commentary translator), a process that can make the featurettes pass slowly, particularly when the translation tends to move faster and be more concise than some of the speakers.

The breakdown of "Searching for Diva is:
* Introduction by interviewer and Beineix biographer Phil Pownie and the producer of the special features (6 minutes, 16 seconds): I would actually suggest skipping past this, as not only is it a redundant advance explanation of what you will be seeing and hearing, but if snooty academics get up your butt the way they sometimes do with me, it could end up turning you off to what follows.
* Vladimir Cosma, composer (10:40): discussing the style of the music and the working methods with Beineix.
* Dominique Besnehard, casting director (7:15): finding the cast, including seeking out the diva herself and hiring non-professionals.
* Frederic Andrei, "Jules" (5:40): now a director, Andrei discusses being a first-time actor and the often contentious creative environment of Diva.
* Anny Romand ("Paula") and Dominique Pinon ("Le cure") (12:00): More from the actors about the production, including Pinon's unique appearance and the poor critical reaction when the movie was relesed. These interviews are mainly conducted in English, but also sometimes shift into French.
* Richard Bohringer, "Gorodish" (6:50): explaining some of the mystery of Gorodish and of Jean-Jacques Beineix.
* Jean-Jacques Beineix, Part 1 - Holding Ground (11:00): shot in a screening room at La Femis, the leading French film school, the filmmaker talks about his radical goals in making his first picture, the struggle for Diva's success, and the interviewer's obsession with the use of space in the film. (As a sidenote, can I say I am getting tired of how dismissive film criticism is of the source novels when discussing a lot of film adaptations? It's easier to be a genius when someone else did the work of coming up with the idea.) In English.
* Jean-Jacques Beineix, Part 2 - In the Cafe (8:40): changing locations, still in English, discussing cars, doubles in the movie, Gorodish as artist and magician, color, inspiration, and more.
* Philippe Rousselot, director of photography (6:00): on capturing the look of Diva and the influence his work ended up having on French cinema. Also in English.
* Hilton McConnico, set designer (6:50): continuing a thread from the Beineix and Rousselot interviews (and staying in English), McConnico tells more about getting the variations of blue in the movie.

Overall, these featurettes are quite strong and comprehensive, and though there is the general self-congratulatory tone that we expect from DVD extras, this material does delve deeper than on-set antics or publicity department-approved soundbites.

FINAL THOUGHTS:
Recommended. Diva - The Meridian Collection is a dramatic thriller that takes a little time to get all of its various pieces established, but once it gets going, is pretty much impossible to stop. The 1981 French film tells the story of an opera-loving postman whose light fingers and propensity to be in the wrong place at the wrong time gets him wrapped up in various plots involving the singer he worships, a prostitution ring, Taiwanese gangsters, and a strange Frenchman and his girl sidekick. Diva carries a stellar reputation, but I found some of it to be rather dated. Still, like I said, I did become completely wrapped up with the intrigue, and the final act moves at a great pace. Plus, this debut for Lionsgate's new arthouse line comes with a lot of extras, setting a good standard for what may follow. 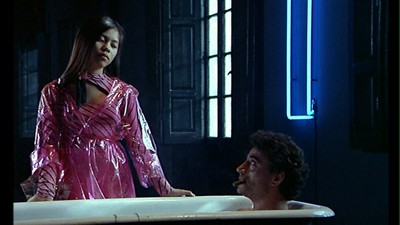