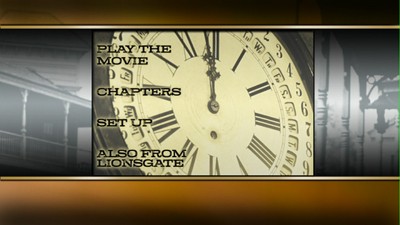 At just after 10:30 on a Sunday morning, three gunmen ride through a small Western town and roost at the train station to wait for the noon train. As they pass, Marshal Will Kane (Gary Cooper) is marrying Amy (Grace Kelly), a Quaker whose unflappable belief in nonviolence means the sheriff will be surrendering his star and leaving town that very day. Only, fate has other plans. As it turns out, the trio of bad dudes at the train station is the gang of Frank Miller (Ian MacDonald), a killer whom Kane sent to jail several years before and has now unexpectedly been pardoned. Realizing that Miller is coming to kill him, Kane decides he must stand his ground and fight or forever be looking over his shoulder. Everyone else in town, including Amy, thinks he should leave and let the bad guys have this round, but Kane is the type of guy who won't let the mob change the definition of what is right just because it's easy.

Directed by Fred Zinnemann and produced by the great Stanley Kramer, High Noon is an unassailable classic of the Western genre. Set in real time, so that the time that passes on screen is very nearly equal to the running time of the film, its story of a man that refuses to betray his own sense of self even when facing impossible odds captures a central quality of the mythology of the American frontier. It has stood the test of time because even though the movie wears the basic uniform of a simple western, it is so much more than just your average story or even one message. Made in 1952, and featuring a crew that included more than a few crew members who were facing possible charges in the Red Scare gripping Hollywood at the time (writer Carl Foreman and actor Lloyd Bridges among them), High Noon was intended as an allegory about the political strife in America and how people were pursuing their own self-interests rather than standing up for what was moral and correct. Multi-layered and full of a rich cast of characters, High Noon touches on race, religion, social structures, and the driving force of the human condition, one's sense of self.

It's also damn entertaining. High Noon ends up getting screened at least once in any film student's academic career because it's a near perfect example of how to put together a film. Cutting back and forth throughout the town, seeing the various players scurrying through this crucial hour, Zinnemann is whipping up a cinematic meal via pressure cooker. Marshal Kane goes through his town looking for deputies, and with each refusal he feels the tide building against him. Frequent shots of clocks, along with the tick-tock time signatures of Dimitri Tiomkin's score, keep reminding us there is a deadline. Shots of the empty tracks and the twitchy cowboys waiting by them are indicators of what is coming. Nothing need to be said at that moment, the empty horizon says it all. The stillness works in direct juxtaposition to Cooper's constant movement--one side is calm and assurred, the other side not so much.

Gary Cooper was never better than he is in this movie. A stoic yet homey screen presence, his confidence slowly deteriorates even as he shores up his resolve. Though there are fine supporting performances by Lon Chaney Jr. and Katy Jurado, it's really Cooper's film, the narrative resting entirely on his sturdy shoulders just as the task of subduing Frank Miller is being left to Marshal Kane. There's a reason he won the Oscar for Best Acting. In fact, Oscars were also awarded to High Noon for Best Editing, Best Score, and Best Original Song for "Do Not Forsake Me, Oh My Darlin'," the recurring theme, sung by Tex Ritter, that follows Kane around like a melancholy cloud. These are the essential components that make this film work so well, and they deserved to be zeroed in on when it came time to hand out the statues. (Carl Foreman's finely tuned script also deserved a nod, but he was on his way to being blacklisted by that point; a redress in his reputation would come later.)

Naturally, with such a build-up, the whole film would be for nothing if there wasn't a big finish, and High Noon has a doozy of a climax. Rest assured, the shoot-out will not disappoint, and the very last scene of the picture drives everything home with quiet force. 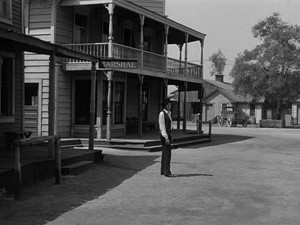 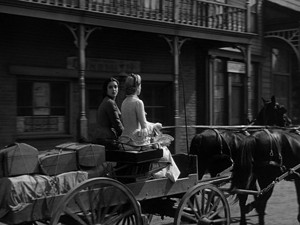 Video:
This is not the first time High Noon has been on DVD. There have been at least three previous releases as far as I can tell, including one in 2003 from the old deal where Artisan had licensed Lions Gate's back catalogue and another as recent as two years ago. I don't have any of those editions to compare this 2-Disc Ultimate Collector's Edition to, but I'd be very surprised if they looked better than this new DVD. The 4X3 full-frame black-and-white image can't be beat: excellent resolution with well-rendered tonal values, free of dirt, scratches, or bad splicing. It's everything you could hope for from a transfer of a classic film.

Sound:
There are two audio options here: a basic Dolby mix of the original soundtrack elements and an "enhanced" remastered version. I didn't notice any aggressive audio effects in the enhanced version that should bother purists or that call unnecessary attention to themselves. Randomly sampling between the two versions, I am actually hard pressed to say what is really different about them, except that the simpler mix sounds slightly muffled in comparison to the enhanced version. Both seem of decent quality, though, and I never had any problem hearing distinctions between dialogue and music, nor did I hear anything out of place.

Having dug around a little, it looks to me that the audio elements match the specs of the Artisan release, at least if DVD Savant's original review is anything to go by (which, as we know, it is).

There are English and Spanish subtitle options, as well as English Closed Captioning.

Extras:
There are two DVDs in this new High Noon release, hence the 2-Disc Ultimate Collector's Edition subtitle. DVD 1 has the movie, some Lions Gate trailers, and the audio commentary from the 2002 Artisan special edition, featuring descendents of members of the cast and crew: Maria Cooper-Janis, Jonathan Foreman, Tim Zinnemann, and John Ritter. 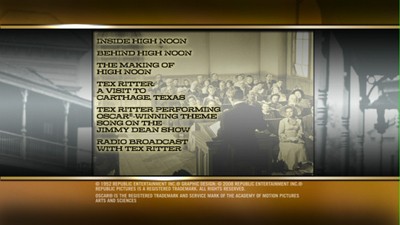 DVD 2 is given over to supplements. Among them is "The Making of High Noon" featurette hosted by Leonard Maltin that was an extra on just about every release of the movie from 2000 to 2006, and a shorter, far inferior documentary, "Behind High Noon" hosted by Maria Cooper-Janis, that first showed up in 2002. Alongside a radio interview with Tex Ritter, discussing his own film career and singing for High Noon, these appear to be the only bonus features on this disc that are retreads from previous DVDs, the rest are new.

Tex Ritter is featured again on two more extras. A five-minute selection, "Tex Ritter: A Visit to Carthage, Texas" shows us the Tex Ritter museum, and a special television performance of "Do Not Forsake Me" shows the cowboy crooner on "The Jimmy Dean Show."

The final and most substantial piece is a new 50-minute documentary "Inside High Noon, narrated by Frank Langella. This awesome program dissects the cultural resonance of the picture--including negative reactions and alternate interpretations--and its tightly designed storytelling, with its step-by-step structuring. Finally, the political troubles and production hiccups just prior to release are touched on. Interviews with historians and admirers (including President Bill Clinton) and many of the offspring who participated in the audio commentary make up the bulk of the feature (sadly, John Ritter had passed before this was made and he did not participate in Cooper-Janis' tribute, where some of this footage was culled from). This means that interviews with actual participants--including Stanley Kramer, Fred Zinnemann, and Lloyd Bridges, as well as rock legend David Crosby, son of cameraman Floyd Crosby, and John Ritter--are left to the twenty-two minute Maltin featurette. Maltin also shows photos from a couple of deleted scenes.

High Noon: 2-Disc Ultimate Collector's Edition is a standard plastic-case release, with a hinged extra tray on the inside to make room for two discs. The art direction is quite good, with a well-designed cover image evoking a vintage poster design that is reprinted on a cardboard slipcover that fits over the case. The paper used for the cover is rougher than the normal glossy slipcovers, adding to the old-time look of the edition.

FINAL THOUGHTS:
DVD Talk Collector Series. It is a rare instance when High Noon isn't placed on the top shelf of any movie categorization, and far be it from me to do any different. It's one of those movies you can watch over and over and never tire of. Though High Noon has had multiple DVD releases over the years, this 2-Disc Ultimate Collector's Edition at last comes up with the kind of package this long-standing triumph deserves. The presentation is sublime, with a full disc of bonus features that truly take you deeper into the understanding of the movie. Thrilling, insightful, and inspiring, High Noon should be owned by all. Truly timeless, it always speaks to whatever period it's viewed in, and in our troubled world, the plight of Marshal Will Kane will never cease to have meaning. 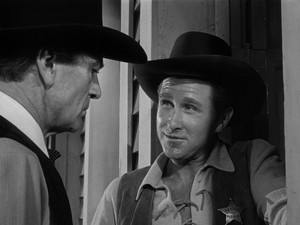 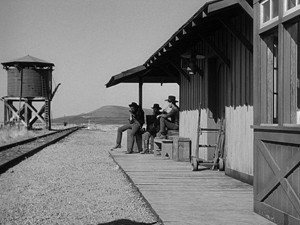