After directing a pair of solid independent films (Swingers and Go) Doug Liman burst into the big time with The Bourne Identity, an excellent action thriller that managed to capture all of the excitement of the Bond films and had an enticing mystery.  His follow-up to that hit was Mr. and Mrs. Smith, a rather pedestrian film that should have been much better than it was given the premise, stars, and budget.  His latest theatrical effort has just made its way to DVD and Blu-ray:  Jumper.  Like Mr. and Mrs. Smith, the film has an interesting premise and an upper-8 figure budget, but also like Liman's previous effort, it just doesn't make the mark. 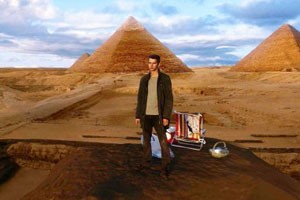 David Rice (Hayden Christensen) is a fairly ordinary 15 year old kid.  He's shy around girls, he doesn't get along with his dad, and though his mom left them when he was 5, he's fairly well adjusted.  That's until he discovers that he can 'jump'.  He has the ability, never explained, to instantly transport himself to anyplace he's ever seen, even if it's only in a picture.   So after getting into a fight with his father, David jumps away for good.  He gets money by jumping into bank vaults in the evening and stealing piles of cash.  Of course he's not a bad guy, so he leaves them hand written IOUs.

Eight years pass and David is living high on the hog.  He has a fancy apartment in a high rise, all the possessions he wants, and a closet full of gold and money in different currencies.  He's no longer shy around girls and can easily pick up the hottest chicks in any bar.  (An ability that he must have gained when he learned how to jump.)

Things are going well until David comes home one day and finds Roland (Samuel L. Jackson) in his apartment.  He's a Paladin, the sworn enemies of Jumpers, and his mission is to kill David.  First however, he wants to find out if David is plugged into a Jumper network and knows the identities of others with his abilities.  (Presumably just the jumping...I assume he lets guys who score a lot live, but you never know.)  It would seem that the Paladins have no chance against Jumpers, but they've discovered their weakness:  electricity.  If they are shocked, they can't jump and the Paladins have a whole array of weapons that will deliver paralyzing, but non-lethal jolts. 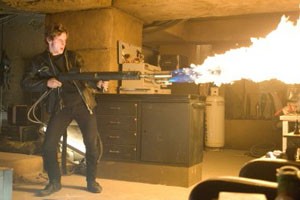 Barely escaping with only his life and a backpack full of money, David decides to go to the only place in the world that the Paladins could possibly find him:  his old home town to look up the girl he used to like, Millie (Rachel Bilson).  She's a hottie, doesn't have a boyfriend, and though she hasn't seen this guy for eight years and knows nothing about him, decides to get on a plane to Rome with him that very day.  (She could have a passport, I guess, but why would David?  Oh yeah, and he takes his backpack full of cash through airport security and none of the TSA agent find it strange.)  Trailed to Rome, David has to escape from the Paladins and keep his girl friend safe from danger, while Roland gets ever more intent on killing the young man.

This is almost a good movie.  It has an interesting concept, but the script is just too bland and full of holes to work.  Even if you're barely paying attention you'll spot multiple continuity errors.  (Just a couple of the more egregious ones:  Roland goes flying out of the window in Millie's 2nd floor apartment, while on fire no less, and 15 seconds later he's back in her living room.  Another Jumper, Griffin (Jamie Bell) jumps into a war zone while riding in a taxi.  They land and the driver is at the wheel, the next shot he's gone, never to return.)  Plot holes are fairly common too.  (So, how did the Paladins kill Jumpers in the middle ages without the use of electricity?  You would think the Paladins would have been wiped out.)  Much of David's actions make no sense either.  That makes it really hard to suspend your disbelief and just enjoy the film for what it is.

I can look past that however.  If the characters are engaging a few minor inconsistencies aren't fatal.  In this movie however bland is the key word.  David has no personality, or more accurately it changes from scene to scene.  As the film opens he loves being a rich playboy.  Soon after, for no reason, he wants to settle down.  He's shallow as a person, and very dull.  Even if he was an ass hole he would have been more interesting.  What type of bank robber leaves IOUs, and why did he think he'd ever pay them back? 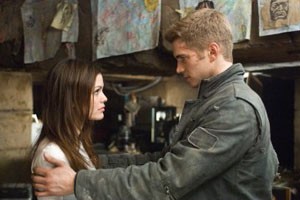 Millie is no better, she's basically there to be a hostage, and the two main characters have no chemistry at all.  What's surprising is that Samuel Jackson's character is equally drab.  It's like he was working to make his role boring.

This isn't a totally worthless film however.  It does have some redeeming value even if the plot and characters are unappealing.  The premise is nice, and the beginning, when David is showing how he lives, it's kind of fun.  The action sequences are also well done and the writers did come up with some interesting uses of jumping in a fight.  If only it didn't have a hole riddled plit, flat characters and a deus ex machina ending it would have been a great flick.

Even though this is a recent release, I wasn't expecting a lot from this Blu-ray disc.  After all, the movie was filmed in several different countries with different crews in each country.  Even with the 2nd unit director and DP being constants, it would be hard to maintain an even look through the film.   That's what this film does however and it looks great.  The 2.35:1 image has an AVC MPEG-4 encode and looks really good.  The plot didn't really pull me in, so I spent a lot of time looking at detail, the snow on the ground in Ann Arbor, the sand in the Sahara, and the surface of the buildings in China.  In all cases the level of detail was excellent with grains of sand being seen as easily as the texture of melting snow.

The colors were also nice...not overly tweaked in post-production (something I hate) and glaringly bright, but natural and even.  The flesh tones looked nice and not artificial, and the whites were bright without being crushed.  The black levels were very good, but there were a few scenes where I would have preferred them to be just a tad more deep and inky.

Digitally things also looked great.  There aren't any compression artifacts and the most common digital flaws are not present.  Even in the action scenes where several 'jumps' and wormholes were taking place in rapid succession the disc was able to keep up.  Though this film isn't my favorite, I there really isn't anything wrong with the disc.

This movie comes with a DTS-HD Master Audio track that is quite impressive during the action scenes.  When David jumps, there's a nice room-filling *Pfffzzzzzt* that employs all the speakers nicely, and the fights really make full use of the soundstage.  While some of the aural effects are very nice (I liked the way the electric stick sounded when they charged and went off) when the action stops the mix throws too much sound to the front.  In some of the dialog scenes the voices are anchored to the screen a bit too much.  That's not a huge deficit, but it is a little disappointing when compared to the battles.

This BR disc has a nice selection of bonus items, which are even more appealing since they're all offered in HD!  Thanks Fox, us viewers appreciate it!

First off there's a commentary by with director Doug Liman, writer/producer Simon Kinberg and producer Lucas Foster.  Not a bad commentary, they joke around and talk about the production.  At one point someone (Liman?) mentions that this film was faithful to the source material, but that they only kept one scene from the graphic novels.  They re-imagined the rest, using the characters and they way that they'd react, as portrayed in the books.  Me thinks this is where they went wrong.  Why throw out a good story and replace it with an ill conceived plot like this one?  Liman also makes the claim that this film is really just an independent movie, with a large budget.  Yeah, right.  Keep telling yourself that.

There's also Profile 1.1 picture-in-picture option; Jumping Around the World.  If, like me, you don't have a player that supports 1.1 and you don't have a PS3 (which is what I use for 1.1 discs), there is a stand alone version available, which is a nice addition.  I'm not sure what I think about these P-in-P commentary tracks yet.  While I thought the one in Sunshine was good, and the one in Resident Evil:  Extinction pretty lame, this one fell in the middle.  In general I feel that these pop-up facts and videos are too intrusive and distracting.  There are some interesting tidbits that pop up, and I enjoyed the map showing just where David was, but it really didn't do much for me.  A lot of the info was contained on the commentary track, so it wasn't as exciting or informative as it could have been.

Doug Liman's Jumper Uncensored is a 35 minute look at the production of the film.  This follows the director around as he sets up scenes, talks to the cast and crew, and generally does his thing.  If I was interested in the director or film, I might have found this more interesting but as it is, it was just so-so.  That's followed by Making an Actor Jump, a seven minute featurette about the creation of the jumping effect and discussions about what it should look like.  This was more interesting.

Jumping from Novel to Film:  The Past, Present, and Future of Jumper is pretty much what the title suggests, a look at the adaptation of the graphic novels and hints of a sequel movie.  There's also six deleted scenes that were deservedly cut (with one possible exception), Previz: Future Concepts, an anamatic for a scene for a possible sequel, Jumpstart: David's Story, an animated graphic novel story that is not recounted in the movie, and a D-Box Motion Code for those people who have that company's motion chairs and a decoder.

Oh yeah, this also includes a second disc with a digital copy of the movie so you can watch it (in standard def) on an ipod or laptop.

This is one of those movies that could have been a lot of fun, but the multiple flaws just make it a bland offering.  It has an interesting premise that is developed well, but the lifeless characters and countless goofs and plot holes makes it hard to take seriously.   The Blu-ray disc does do a good job at presenting the film, and looks much better than I was expecting.  This would make a good rental.