There Will Be Blood

Paramount // R // June 3, 2008 // Region 0
List Price: $39.99 [Buy now and save at Amazon]
Review by Stuart Galbraith IV | posted June 14, 2008 | E-mail the Author
Freely adapted from Upton Sinclair's 1927 novel Oil! with a central protagonist suggested by real-life oil tycoon Edward L. Doheny, There Will Be Blood (2007) is another unique, imperfect, mesmerizing, problematic film by writer-director Paul Thomas Anderson, debatably a flawed masterpiece. Unlike many of his "VCR generation" contemporaries, as a filmmaker Anderson continues to grow as an artist, and to his credit none of his five feature films is quite like any of the others. After watching Paramount's fine Blu-ray presentation of the film, I was reminded of an email a writer colleague sent me, saying he was curious to see what I thought of the film because he was "still not quite sure what to make of it myself." That's pretty much my immediate reaction, too. I liked most of what I saw, but am still mulling it over trying to figure out what it all means. Clearly Anderson is a major talent though his films have run hot and cold. For example I found Boogie Nights derivative and absurdly overrated, but thought 80% or so of Magnolia was both brilliant and highly original. There Will Be Blood in some ways is less satisfying and more cryptic, but it may be his finest achievement to date. 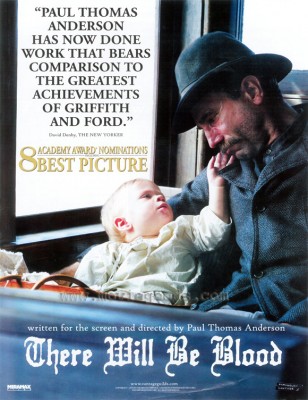 Just as Boogie Nights opened with a showy, uninterrupted three-minute take, There Will Be Blood goes one step further: the first 14-and-a-half minutes unfold without any real dialogue; everything is told visually, suggestive of silent cinema (though stylistically it resembles silent films not at all). It's highly effective and sucks the viewer right into the story, but like Boogie Nights the gimmick eventually draws attention to itself and near the end becomes rather forced.

What we see is the early prospecting career of Daniel Plainview (Daniel Day-Lewis), a silver miner who in the late-1800s switches to oil well drilling with growing but extremely hard-earned success. When an accident kills one of his employees, he adopts the man's son, H.W. (played later in the film by Dillon Freasier), using the boy to elicit trust when he wants to purchase and lease oil-rich land for a pittance from unwitting poor farmers.

Plainview eventually sets up shop in Little Boston, California, but must contend with an evangelistic "faith healer," Eli Sunday (Paul Dano), a false prophet whose twin brother, Paul (also Dano), secretly tipped off Plainview about the oil-rich land. (Watching the film, viewers immediately question whether Paul and Eli are really one and the same, but the final scene definitively answers this important question.) When Plainview openly insults Eli by casually refusing to let the preacher bless the first well, the tension between the two becomes palpable. Meanwhile, a man claiming to be Plainview's half-brother Henry (Kevin J. O'Connor) enters the scene, and later H.W., now about ten years old, goes deaf following an explosion at one of the derricks.

What exactly is There Will Be Blood about? Well, it's about an obsessive, solitary, unforgiving, misanthropic sociopath. As he (plainly) tells Henry, "I have a competition in me. I want no one else to succeed. I hate most people." He's a bit like Fred C. Dobbs, Humphrey Bogart's paranoid, obsessive character in Treasure of the Sierra Madre - had he succeeded in making it back with all that gold and started a mining empire. Like Dobbs, he thinks money will bring him happiness but in fact having all the money in the world bores him. Like Charles Foster Kane he's less interested in money than power, specifically the power to control others, even more specifically the power to have an edge over the person sitting across the table. Maybe that's what those final scenes between Plainview and H.W. and Plainview and Eli are all about.

He bonds with Henry but lives to regret it, and it's uncomfortable even while it lasts: Henry is penniless and Plainview is wealthy, and the latter seems to use their relationship mainly to reflect on his own past and present hatefulness. He has feelings for his surreptitiously adopted "son" but comes to resent him, and most of the time merely uses his to engender trust and sympathy in his land-leasing pitches.

Is Plainview the face of corrupt American capitalism? Is There Will Be Blood about the conflict between capitalism and religion, between greed and salvation, or maybe the suggestion that perhaps they're two sides of the same coin? One thing's for sure: Thunder Bay it ain't.

One aspect of the film many quickly picked up on and in some cases found ruinously distracting was Daniel Day-Lewis's decision to pattern his voice after the charismatic, intimidating director John Huston. Anderson cites Huston's greatest film, the aforementioned The Treasure of the Sierra Madre, as a major influence and indeed There Will Be Blood is similar in many respects without ever imitating it. However, Day-Lewis is clearly imitating Huston, who later in life found steady employment as a character actor, often playing foxy, sinister characters in many respects identical to Plainview. Indeed, Plainview is almost like a young Noah Cross, Huston's incestuous tycoon in Chinatown (1974), his best-remembered film role. I too found this initially distracting, but Day-Lewis and the screenplay add so many other dimensions to the character that, over time, the Huston influence doesn't completely overwhelm the character.

Undeniably impressive is the film's overall look and its superb score. It's beautifully photographed (by Robert Elswit, who has shot all of Anderson's films) and has a marvelous period authenticity but, more to the point, without really being imitative it carries the same weight and scope of the best silent era films. Some have likened the film to Griffith and Ford (presumably early-career Ford) and neither comparison is inapt.

But more impressive than this, and something that moves even beyond Griffith and Ford, is that Anderson doesn't limit himself to period authenticity in the props and costumes. He and Day-Lewis reportedly studied period recordings for their wording and cadence, and the result is a period authenticity with the language, one several steps removed from 21st century-speak, that adds significantly to the film's mesmerizing quality. When Plainview makes his pitch to the citizens of New Boston, half the credit goes to Anderson's delicate writing.

The score by Jonny Greenwood is not what you'd expect from Radiohead's lead guitarist. It's the kind of score you'd find in New Wave and even some mainstream American films in the 1960s; parts of it remind me alternately of cues from Leonard Rosenman's score to Beneath the Planet of the Apes and some of Toru Takemitsu's early work.

There Will Be Blood was shot in Panavision with Color by Deluxe. The 1080p, 2.40 video captures the (literally) oily blacks well and three-day beards of Plainview and Henry with a sharpness revealing individual hairs. It does a fine job with the subtleties of the desaturated color design, and the contrast between the dark interiors and night scenes with the bright barren landscapes. It's a fine presentation of a subtly gorgeous-looking movie, transferred at contemporary standards.

The audio is Dolby TrueHD 5.1, with 5.1 Dolby Digital tracks in French and Spanish, with optional subtitles in all three languages. (In a welcome move, there are two English subtitle tracks, one with dialogue only, the other descriptive for the deaf and hearing-impaired.) The audio mainly benefits the magnificent score, though CGI explosions and gushers provide intermittent workouts for the surround speakers, too. Also included are color bars accessible through the set-up menu.

In a refreshing deviation from the norm, all of this Blu-ray's supplements are presented in high definition. There's not really all that much here, as if Paramount was reaching to come up with something that both Anderson would sign off on while making the disc as appealing as possible to Blu-ray consumers. A photo montage compares historical photos with footage from the film. There are about 12 minutes worth of deleted scenes and alternate takes, though alas none of it includes footage shot with Kel O'Neill, the actor originally cast as Eli, which would obviously make an interesting comparison.

Also included are a teaser and standard trailer, and a curious silent film (circa 1923 according to the packaging) called The Story of Petroleum. The cover sleeve is a flipper, with alternate art on the other side, and the disc includes an insert; hand-colored photos by Shin Katan.

The lack of an audio commentary may surprise some but I applaud the filmmaker's decision to let the film stand on its own merits. I wonder if Kubrick's films would have stood the test of time as well as they have had he yammered incessantly about his themes on laserdisc and DVD releases.

There Will Be Blood has been called an epic, and I suppose the term "intimate epic," in the tradition of films like Lawrence of Arabia, Patton, and Nicholas and Alexandra applies here. It aims high and succeeds much more than it fails, and is impressively, almost defiantly personal, which in high concept Hollywood is quite rare indeed. Highly Recommended.