Just as HD DVD was dying, BCI released a pair of Bob Hope classics on the format.  Virtually impossible to find in retail stores the double feature of My Favorite Brunette and Son of Paleface HD DVD is a disc worth tracking down.  Presenting two public domain titles in HD, it is uncertain when, or if, these will ever make it to Blu-ray.  If you're even slightly interested in these two funny films, I'd pick them up sooner rather than later.

My Favorite Brunette (1947):  It's hard to do parodies correctly.  A good parody is funny and entertaining and makes it look easy.  A bad parody can be torture to watch, and is all too often mean-spirited and not at all humorous.  This film is a great parody of film noir.  If you're not familiar with the genre the film won't be quite as amusing, but even so it will be an enjoyable flick. 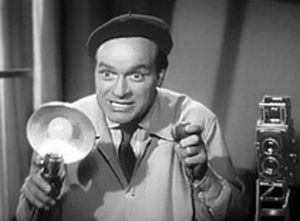 Ronnie Jackson (Bob Hope) is a baby photographer who yearns for the glamorous life of a hard-boiled private eye.  When the detective across from his studio (played wonderfully by Alan Ladd) goes out of town, Jackson is mistaken for him by a damsel in distress (Dorothy Lamour.)  She gives him a map, which he hides, and then we're off for an hour's worth of comic adventure.

One of the reasons this parody works so well is because of the excellent guest stars.  Alan Ladd's role as the real detective is very small but he plays it straight, which makes it wonderfully comical when juxtaposed against Hope's goofy character.1  Peter Lorre appears as a knife-throwing psychopath mimicking several of his other roles, and Lon Chaney plays a character very similar to his character in Of Mice and Men. 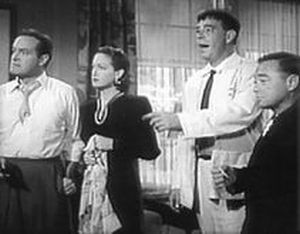 The film has all the trappings of a noir, but Hope's goofy personality and frequent one-liners make it into a hilarious spoof.  The film never takes itself seriously and it occasionally winks at the audience such as when a policeman, led on a wild goose chase by Hope, tells him "If you bother us again, I'll personally punch you in the nose so hard it will look like other peoples' noses."  A funny and spot-on send up of noir films, this is a classic.

Son of Paleface (1952):  This film is a sequel to Hope's earlier hit Paleface (1948).  Hope plays Junior Potter, the son of the character he played in the prequel.  He's a Harvard grad who travels out west to claim the inheritance his father left him.  Unfortunately the chest he obtains in the lawyer's office is empty and everyone in town is expecting Junior to settle up his father's sizable debts. 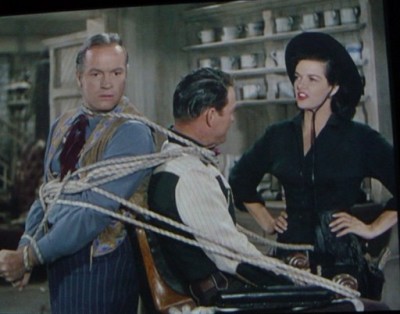 In a competing plotline it's revealed that the local saloon owner Mike (Jane Russell) is really the masked bandit The Torch.  Roy Rogers (playing himself) and his horse Trigger have come to town to nab the Torch and her gang.  Potter gets interested in Mike however, and since everyone in town thinks the goofy Harvard man is rich, Mike is interested in him too.  Add in a tribe of Indians who are after Junior's scalp and you've got a comical western spoof that works more often than it doesn't.

This is another classic comedy, and though it's slightly less entertaining that the other feature on this disc, it's still a fun flick.  It's almost like this is two films, a straight western with Roy Rogers searching for a group of bandits, and a comedy with Hope trying to talk the town's people out of lynching him.  The two rarely meet until the end, and when they do, it to sing a song.

That's not actually a bad thing.  Roy Rogers is much better in this than I was expecting, and Trigger (who is billed as "the smartest horse in the movies") steals most of the scenes he's in.  (This is especially true for the bit where Trigger and Hope are both in bed and fighting over the covers.)  Jane Russell is, of course, gorgeous and charismatic in her role.  She's both voluptuous and strong-willed and that makes for an attractive combination.  (What ever happened to actresses like that?  Today they're all skin and bones.  Anyone else think that Nicole Riche should go eat a donut?  But I digress...) 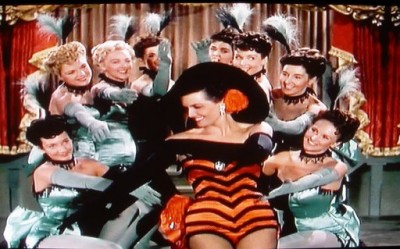 As in Brunette, this film plays it for laughs and never takes itself seriously.  The cameo by Bing Crosby in the opening is a perfect example and laugh-out-loud funny.  One thing that really adds to the appeal of this film are the quick throw-away gags that might be missed.  My favorite one that luckily made the censors is just before the big musical number Buttons and Bows.  Jane Russell sings to Hope, and gets quite a reaction, and then to Rogers, who stares straight ahead the entire time.   Hope waves his hand in front of Rogers' eyes and then glances down to the cowboy's crotch to see if Russell had any effect on him.  It's a blink-and-you-miss-it moment but it's hilarious.

Both films are housed on one 30 GB single-sided HD DVD and are encoded with the MPEG-2 codex.  They are both presented with their original aspect ratio of 1.33:1 in tact and look very good for a pair of public domain films.

The problem with movies being in the public domain is that there is no monetary incentive to have them restored, or even go to much trouble to preserve them.  These two films are available from a number of publishers (a quick search on Amazon turns up literally dozens of different versions of the first feature alone) with often less than spectacular image and sound quality.  I was very pleasantly surprised with the image quality of this HD DVD.  While not a reference disc by any means, it did do a good job of presenting both movies and made them look better than they ever had before on home video.

The first feature, My Favorite Brunette, is in black and white and looks clearer than I've ever seen it.  The level of detail is very good, but not outstanding.  The image is soft and there is some grain too.  There are a few instances where white objects bloom just a bit.  Check out Dorothy Lamour's white bath robe when she and Hope are trying to escape from the sanitarium.  The blacks are not as inky as I would have liked either.  The biggest defects however are the many spots and small scratches that mar the print.  While it's not nearly as bad as some movies I've seen it is very noticeable.

Son of Paleface was shot in Technicolor and also looks very good when compared to other releases on home video.  It looks better than the first feature, and has noticeably less marks on the print itself.  The colors varied from bright and vibrant to about average.  There were some scenes where the flesh tones were a shade too red (the opening sequence for example) but the blues popped nicely as the often do in Technicolor films.

The films both come with their original mono soundtracks.  They both sounded fine, especially for films this old.  Common problems like background noise and tape hiss were not noticeable at normal viewing levels, and distortion wasn't a problem.  Recorded with 50 year old technology, the audio is thin and tinny when compared to movies of today.  The dynamic range is very limited and this is very apparent in the songs where both the highs and lows are clipped.  That's the way it was recorded though, and this disc does a good job of reproducing the original sound of the film.

Unfortunately, there are no extras on this disc.

Both of these films are great fun.  Made at the height of the studio system, these comedy films are filled with excellent direction, talented co-stars, and some hilarious scenes.  Fans of Hope who have gone high def should make it a point to seek these out.  They won't be around for long.  While the video image is not reference quality and the audio is the original mono, the presentation to both of these films in much better than I've ever seen them before.  Highly Recommended.

1)  One of my favorite lines in the film is when Hope is trying to convince Ladd to take him on as a partner.  "I told you before, stick to watching the birdie and you'll die of old age."  Says Ladd, to which Hope retorts:  "Yeah, but I was cut out for this kind of life. All my life I wanted to be a hardboiled detective like Humphrey Bogart or Dick Powell or even Alan Ladd."  It's funny that they mentioned Ladd in the film, but hilarious that the listed him last.