Paramount // Unrated // May 27, 2008
List Price: $36.98 [Buy now and save at Amazon]
Review by Stuart Galbraith IV | posted June 22, 2008 | E-mail the Author
The more I watch it, the more impressed I am by Gunsmoke's early shows. The 19 black and white, half-hour episodes included on Gunsmoke - The Second Season, Volume 2 are of a consistently high pedigree. As a kid I had remembered Gunsmoke only as the tired, hour-long color show that by the 1970s had long outlived the TV genre it helped propel into a major commodity. These early shows are to the TV Western what Twilight Zone at its best was to sci-fi / fantasy, what The Defenders and East Side/West Side were to contemporary drama, Columbo to mysteries, and The Dick Van Dyke Show to comedy. 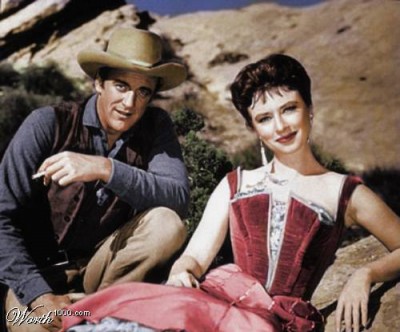 The iconic set-up: Dodge City, Kansas. U.S. Marshal Matt Dillon (James Arness) and his eccentric, game-leg assistant Chester (Dennis Weaver) have their hands full trying to maintain the peace in a city full of gunslingers, gamblers, prostitutes, rowdy cowhands and the occasional rustler. Matt's only other friends are cantankerous Doc Adams (Milburn Stone) and Miss Kitty (Amanda Blake), saloon keeper and coded prostitute ("Why don't you buy me a drink?").

I've stated in earlier reviews that James Arness gives one of television's most underrated performances, but it's worth mentioning again. What's so mesmerizing, so impressively sophisticated about Arness's performance is the way you can see him turn it on and off: how he can relax a bit around Doc, Chester, or Kitty, yet instantly put his "Marshal hat" back on when approached with a problem. It's fascinating to watch the way he looks into the eyes of the people he's questioning or confronting, the way he sizes them up as a possible threat to his community, the understated, subtly physical ways he asserts his authority to diffuse a tense situation or refuse to back down from a threat.

Though literally hundreds of TV Westerns and modern cop shows have come in Gunsmoke's wake, I don't think I've seen anyone better Arness in this respect. I imagine to this day law officers find a real, relatable authenticity in the way Matt questions suspects and victims, and the way he carries himself in a crisis.

All of this is because of Arness's acting, though the scripts only enrich the character. Indeed, these second season shows are notably consistent in the way they're less concerned with story and action than character, usually specifically what's going on inside Matt's head. Even in such episodes as "Chester's Murder," a show in which the almost-deputy becomes the prime suspect in a gun death, the show is less concerned about Chester's unease as the weight of evidence falls on his shoulders than Matt is about his discomfort at having to arrest his longtime friend.

If you like the great psychological Westerns of the 1950s - The Searchers, virtually all of Jimmy Stewart's films from the period - then you'll be pleased to see that Gunsmoke is cut from much the same cloth, and far more adult than virtually all other TV Westerns of the period. (Have Gun Will Travel and, at times, Wanted: Dead or Alive were major exceptions.)

This set gets off to a great start with "Bloody Hands," a typically good episode written by the prolific John Meston and directed by budding genre helmer Andrew V. McLaglen. After Matt massacres a den of thieves in a gunfight far from Dodge, the sole survivor likens Matt to a butcher in a slaughterhouse, a point underscored by the buckboard full of corpses bought back to town like a so many sides of beef. This doesn't sit well with Matt, who turns in his badge.

Matt's fallibility is also on display in "Sweet and Sour," a strong episode guest-starring Karen Sharpe (later Karen Kramer) as Rena Decker - a virginal young thing new to Dodge and looking for work. Smitten, Matt and Chester try to persuade Kitty to hire her at the Long Branch Saloon, but she wants nothing to do with her - Kitty knows the type, and sees nothing but trouble ahead. Sharpe, best-known for play doe-eyed ingénues in films like The High and the Mighty is perfectly cast in this disturbing show full of surprises.

Another surprise awaits viewers in "Cain," about a physically weak, fatally ill musician (Harry Bartell) with but a few months to live who casually announces to Matt that he plans to kill a local rancher, though he refuses to tell Matt or anyone else the reason. Moreover, the scarecrow-like title character seems no match for the rancher, an experienced gunman. Just how Cain exacts his revenge is one of this episode's several surprises.

"Bureaucrat," another interesting show, casts John Hoyt as a highly critical Washington-based overseer of the West's Marshal program. He takes an instant dislike to Matt's methods, particularly how he allows men to carry their guns around Dodge - and practically everyone carries a gun. A fascinating show ostensively about gun control in the Old West, it raises numerous subtle issues throughout and illustrates Matt's precarious control over Dodge and how easily it might slip back into lawlessness.

Once again the back of CBS's DVD ominously warns "some episodes may be edited from their original network versions." Unlike the travesty done by CBS to season two of The Fugitive, there seems to have been no music replacement; the familiar (and overworked), mostly library cues seem unaltered and except for the abrupt fade-out over the opening titles where the "brought to you by" sponsor spot would be (samples are included in the sponsor spots), the episodes appear uncut and not time-compressed. There are six-to-seven shows per single-sided disc, accompanied by concise episode descriptions and airdates on the reverse side of the DVD sleeve. The Dolby Digital mono (English only) is clean and clear, and the show is closed-captioned.

The only supplement, as in previous sets, are several minutes worth of sponsor spots, with Arness extolling the virtues of L&M filter-tip cigarettes ("Reach for flavor. Reach for L&M!") and Remington razors. It's always funny to see Big (6'7") James Arness dwarf his pack of smokes to the size of a domino in his giant hands.

Another great set - let's just hope this isn't the last to avoid radical alteration. Concerns that the wholesale rescoring on The Fugitive have set off a firestorm of concern that other CBS-owned shows may be next on the chopping block, even those that use CBS library music or original scores written especially for the show. Let's hope that doesn't happen. In the meantime, this set is a must-have for both Western and classic TV fans.