Centuries ago, man and the mystical kingdom were at war for dominance over the Earth. To wage their bloody battle, King Balor (Roy Dotrice) commissioned a mechanical army of indestructible warriors. The devastation caused by this new Golden Army was so great, however, that even the mystical folk were horrified by what they had unleashed, and so Balor recalled the troops and created a peace treaty with humanity, giving them the world above ground while retaining the world below ground for his people. As a symbol of this agreement, Balor broke the crown that controls the troops into three pieces, giving one to the humans and retaining two in his realm.

Now, after years of living in the shadows, Balor's son, Prince Nuada (Luke Goss), has decided that his people have no need to be ashamed. He is intent on reactivating the Golden Army. His hunt for the pieces of the crown attracts the attention of the Bureau of Paranormal Research and Defense and its most infamous covert agent, the big red demon Hellboy (Ron Perlman). Along with his cohorts, the fishman Abe Sapien (Doug Jones) and the pyrokinetic Liz Sherman (Selma Blair), Hellboy will do whatever it takes to keep Nuada from ravaging the Earth.

It sounds simple enough, but that is the condensed version of the plot for Hellboy II: The Golden Army, which is bursting at the seams with story and ideas and crazy characters. Unfortunately, there is nothing "simple enough" in this sequel to the 2004 action-adventure monster movie. Start with the countless legions of unstoppable, regenerative mechanical men and work backwards from there, and you'll have a basic idea of the scale at which director Guillermo del Torro and comic book creator Mike Mignola are working on this time. Success has spoiled the Hellboy. They could have called this one Hellboy and the Temple of Doom for the way it replaces almost everything that was so good about the first installment with over-the-top spectacle. There's something wrong with the world when the trailer for The Mummy III that ran before Golden Army could have been inserted in the middle of the Hellboy picture and no one would have even noticed the difference. 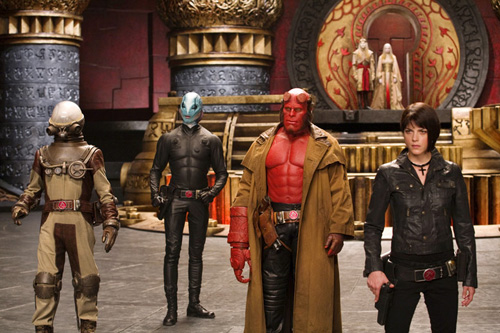 The original Hellboy was scrappy and lean. In keeping with the original spirit of the Mignola comics, it played up the camaraderie of the outsider adventurers and the cartoonist's sardonic humor while pitting Hellboy against spooky Lovecraftian creatures. It was one-half Universal Monsters and one-half pulp action serial, and it was a lot of fun. Made completely under the radar and arriving free of early expectations, it was a real surprise for moviegoers.

I loved that movie and have watched it several times since. It pains me to write a negative review of Hellboy II: The Golden Army, but there is no way around how disappointed I was watching this. While the lower-budget Hellboy limited the amount of toys that del Torro could play with, and so he had to plan everything to make the best use of what he had, the popularity of the franchise has now gained him access to the entire toychest. Instead of choosing wisely, del Torro grabbed everything he could and crammed as much as would fit into the movie's two-hour running time, shoving aside all the great character material and the unique timbre of Mike Mignola's storytelling in the process.

Taking the "II" in the title way too literally, del Torro tries to double up on everything. A bad prince and a good princess (Anna Walton) means two conflicting forces amongst the elves (or whatever they are), as well as a second romance to go alongside the Hellboy/Liz relationship when Abe falls for the pasty royal. Thematically, we've got the two conflicting worlds, and the two sides to Hellboy's soul. He and Nuada are also doppelgangers of a sort, champions for a lost cause, last of their kind. Some of it works, and some of it doesn't. The Abe Sapien/Princess Nuala romance is forced, though it does yield the most memorable scene of the movie, involving the lovesick men, Barry Manilow, and multiple six-packs--one of the few non-battle scenes that doesn't feel perfunctory. Hellboy's inner turmoil and Nuada's attempts to play on his doubts and woo him to the dark side hint at interesting drama, but that part of the movie is all but dropped after the third of five big fight sequences. Why stand around and talk when Hellboy can smash stuff with his big stone hand?

The loss of character development would possibly be acceptable if the fight scenes were more invigorating, but as they rise in number, the creativity wanes. Pit Hellboy against an opponent, destroy property, lather, rinse, repeat. By the time we get to the climactic showdown with the Golden Army, rather than be dazzled, I was left thinking, "Really? Is that all you've got?" As my #1 movie buddy put it, it felt like we were watching a video game, with each level getting progressively harder until Hellboy gets to the last task, where he has to shut everything down. This comparison nails something about the generic nature of Hellboy II. As I suggested in my comparing it to The Mummy franchise, The Golden Army could be any of a number of special effects-laden fantasy series. Though the multiple television sets Hellboy is always watching give us glimpses of the classic monster movies that Hellboy II was meant to emulate, the final result suggests that del Torro was spending far too much time hanging with Peter Jackson when he should have been watching Bride of Frankenstein again.

The one upside for del Torro fans, of course, will be the bevy of creatures the director has created for Hellboy II. Outside of a godawful opening section with Hellboy as a youngster and its creepy-looking Howdy Doody-style mask that prevents the child actor from moving his mouth properly, all of the effects look spectacular. Those longing for a redux of Pan's Labyrinth will appreciate the Angel of Death sequence, even as it stops the story dead to set up future sequels. There are also some neat things to see in the highly anticipated Troll Market, despite those scenes being somewhat indicative of the overstuffed, showy nature of the whole movie. Best of all is the Forest God, which Hellboy fights immediately afterwards, complete with humorous asides by the one awesome new character from the comics, the ectoplasmic German taskmaster Johann Kraus (body by John Alexander and James Dodd, voice by Seth MacFarlane). Too bad that's also the turning point where the Hellboy II train derails completely.

Boiled down, Hellboy II: The Golden Army has too many concepts and not enough story, and too much action without motivation. While Hellboy was always meant to fight big monsters and save the world, his dramatic conflicts work best when they stay small. He's a big lug in a world that's too tiny for him, a bull in the planetary china shop. As his nemesis Prince Nuada-wada-shoop-shoop (sorry, couldn't resist) reminds him, he's the only one of his kind, he's special. Thus, the great failing of Hellboy II: The Golden Army is making Hellboy exactly like everyone else.