Girl on the Bridge 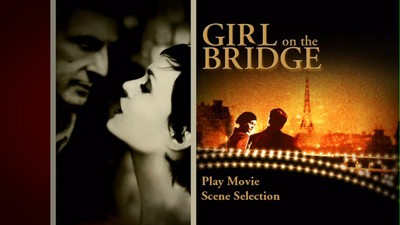 Patrice Leconte's 2000 feature Girl on the Bridge is a wholly cinematic romance. In love with love, in love with images, in love with the very idea of storytelling and the freedom to transcend and make the impossible seem entirely possible. Though certainly not the greatest romance ever told, when it comes to circus freaks and the emotionally damaged, it really doesn't get much better.

The movie opens in an abstracted reality. The down-and-out Adele (Vanessa Paradis) speaks to a room of unseen individuals, explaining her string of bad luck with men that is only perpetuated by her constant need for love. She is at the end of her rope, and when we next see her, she is standing on a Paris bridge, contemplating throwing herself in the Seine. Like the angel coming to George Bailey in It's a Wonderful Life, Gabor (Daniel Auteuil) appears and offers to change her luck once and for all. All Adele has to do is go with him and let him throw some knives at her. He's a cabaret performer in search of an assistant, and since she wants to die anyway, what would be the big deal if one of the blades went astray?

Yeah, it's a crazy proposition, and like any forward-thinking suicide, Adele jumps rather than head off with the smooth-talking knife thrower. Only, Gabor is insistent, and he jumps in after her, fishes her out, and then begins to show the girl that she is the master of her own luck. In fact, she's the master of all luck, incapable of choosing wrong in a gamble. Down and out himself, Gabor is trying to leave a dark past behind him and make a fresh start. Saving Adele from her nymphomania and emotional neediness is the ticket to his own salvation, the cure for his own emotional handicaps. The more she believes in him, the truer his throws; when she tenses or flinches, so comes the tiny cut--and you know what they say about a thousand tiny cuts.

For their debut outing, Gabor pushes the limits in order to secure the gig. He will throw blind, hiding Adele behind a sheet and throwing the knives based on his memory of her position. This daring feat exposes them both to the ravishing ecstasy that comes with the rush of fear and the adrenaline of the narrow escape. Adele gasps orgasmically as each blade slides past her skin, given over to the inextricable link between sex and death. Immediately after, the two gamble their earnings, relying on Adele's supernatural luck to compound their fortunes. Only when she doubts herself do they lose. 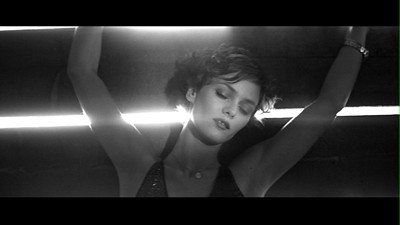 In their ways, Gabor and Adele are stand-ins for death and sex, respectively, and thus are also inextricably linked. They form a psychic bond that allows them to speak to each other even when separated by miles, and when Adele reverts back to her old habits, the resulting parting of ways immediately puts them both back in the downward spiral. Early on, Gabor shows Adele a parlor trick where a torn dollar bill is reunited via "magic," the separate halves being worthless on their own but of some value together. For all of the sexual tension that is evident between the pair, they never actually give in. Adele in particular makes her interest known, but Gabor keeps his distance. It's a folly straight out of Hemingway: you can't deny a sex maniac her sex. It's necessary for the story arc, however, and so Adele's departure makes sense. She indicates that despite all Gabor has done for her, he has been less concerned with her needs than he has with how they fit together. Of course, her new conquest, a Greek man who has just been married on the cruise ship where Adele and Gabor are performing, is a bad choice, and the destined pair will have to travel through the depths to get back to one another. When they do, though, a kind of parity is achieved, with Adele returning the favor to the emotionally stifled Gabor and saving him from himself.

Leconte, working from a script by Serge Frydman, embraces the breathless romanticism and the anything-goes sensation of being deliriously in love that pulses through Girl on the Bridge. The black-and-white photography of Jean-Marie Dreujou and the way the camera flies around, swooping in on a scene and unfettered by earthly boundaries draw easy comparisons to Wim Wenders' Wings of Desire, but without the reserved attitude. This could also be seen as Girl on the Bridge's one Achilles heel. While Wenders gradually moves us out of the cold, unemotional world of his angels and into something more passionate (also personified by circus performers), Leconte practically lights the fire in the first frame. There is little to hold him back, and with all of the change-ups and outrageous happenings, he probably could have stood to push the movie even farther visually. Imagine this picture remade by Baz Lurhmann.

Even so, the story of Girl on the Bridge is wholly original, and Leconte does prove himself a master of seduction. The actors deserve some extra credit for making this possible. Daniel Auteuil manages to make a repressed cad charming, and with her bad teeth and gawky posture, Vanessa Paradis exhibits a strangely alluring, goofy sensuality that delivers on Gabor's insistence that she must make the audience fall in love with her if their act is to work. Just like the characters they portray, these actors' imperfections are what make them so perfect, an unconventional romance requiring unconventional participants. Sure, a little more zazz could have pushed Girl on the Bridge into something classic, but even if it doesn't rank in the highest echelon, it's certainly unforgettable and there is no other movie quite like it. 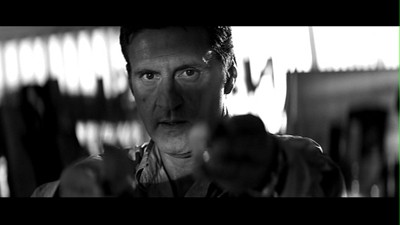 Video:
Fans who have been waiting for Girl on the Bridge to finally come to DVD should go ahead and temper their excitement now. This Paramount/Legend release imports the anamorphic widescreen transfer to a single-layer disc that, like a bad date, instantly gives away all of its problems. From the very first scene, you will notice halo effects around the figures, and combing appears throughout the movie. They aren't drastic problems, but they are readily apparent. The black-and-white tonal values themselves aren't bad, and the disc is watchable, but it certainly seems like a lazy effort for a 2008 release.

Sound:
Things don't improve much in the audio department. A Dolby stereo mix is the only audio option, and though preserving the original French, it sounds thoroughly average. The English subtitles can't be turned on or off, and they appear to be imported right along with the video transfer in that there is a ghost image of each letter just a little to the side of every one, like a little shadow. Even if you don't notice this in the picture, it's unavoidable in the subs.

FINAL THOUGHTS:
Given the problems with the technical specs of this barebones release, Patrice Leconte's Girl on the Bridge is one of those difficult products to review. On the one hand, this crazy romance between two messed-up people who find each other out on a magical edge where luck, spectacle, sex, and death all commingle is a movie that is totally worth seeing; on the other hand, if we get entirely caught up in the movie-as-product aspect of the DVD world, then the sub-par picture and audio quality make Girl on the Bridge something that no one can wholly endorse. For the movie alone Recommended, but based on the DVD quality, Rent It and judge how much you can look past the DVD's surface faults by how much you fall in love with its interior contents. Isn't that what love is supposed to do anyway? Make us forgive the failings of that which has captured our heart? 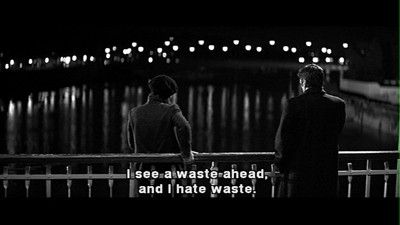