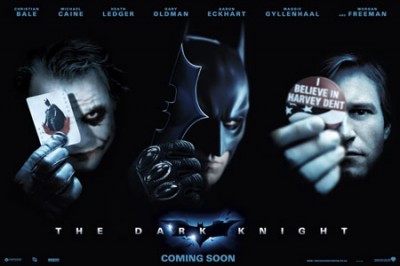 A new standard has been set for superhero action movies. While one billionaire, the industrialist Tony Stark, has so far owned the summer, it's time the mustachioed playboy step aside and let the his much richer colleague take the stage. Iron Man was an example of pure entertainment done well, but Christopher Nolan's second Batman picture, The Dark Knight, is entertainment as high art. It's as close as you're likely to get to a perfect genre film, and a few moldy one-liners not withstanding, it barely flubs a note.

As a reviewer, there is not much left for me to say at this point. Given the hype and the near universal praise The Dark Knight has already received, I'm not sure what one more voice in the chorus is really going to do. Yes, this movie is as good as they say. Truth be told, I was fairly ambivalent to Batman Begins. It was good, but its first half dragged. Did we really need another Batman origin story? Yet, the first outing of Nolan, director of Memento and The Prestige, and his caped crusader, as played by Christian Bale, hinted at greater things.

The Dark Knight is what they were getting at.

Most of the cast returns for this sophomore effort. Bale once again dons the cape and cowl, and the inspired casting of Michael Caine as Alfred the butler and Gary Oldman as Commissioner Gordon still seems ingenious even after all these years. The only thing that has changed is the love interest, Rachel Dawes. Apparently Katie Holmes could not be released from her pod in time for filming, and so Maggie Gyllenhaal has stepped in, proving that Holmes was a little girl trying to pass in an adult woman's shoes. Not only is Gyllenhaal more convincing as an assistant district attorney, but she's also more convincing as a woman. I believe that Bale's wolfish Wayne would fall for Gyllenhaal, she is more than his match in a way Katie Holmes never could be.

She is also a match for Gotham City's new district attorney, the white knight Harvey Dent (Aaron Eckhart). In one of the films main themes, Dent is put on a pedestal as the realistic equivalent to Batman, the man who isn't afraid to stand up to crime as he is, without the protection of a mask. He's a shining example of the good the dark knight detective has done, of the power Batman has given back to the populace.

On the flipside, the sinister and malicious Joker is the criminal world's proportional response to a costumed vigilante. If Batman is going to up the stakes as far as crime fighting is concerned, then the criminal underworld is going to have to up their game in order to compete. As portrayed by the late Heath Ledger, Dark Knight's Joker is a revelation as far as screen villains. In the Batman comic books, the Joker has long since left behind the clown routine and turned into a psychotic agent of chaos. That Ledger can transform his entire being to be the Joker should be no surprise to anyone who saw Brokeback Mountain. If nothing else, that pivotal role in Ledger's career proved that the actor could obliterate his own personality in order to completely inhabit a new physical space. It's one thing to put on a costume and recite a few lines, it's another to completely become that character. When Heath Ledger stepped into any role, the public persona was left behind, and he became whoever it was he was portraying.

Really, in any good action story of this kind, the hero is the least interesting of the cast, and The Dark Knight is no different. Christian Bale is outstanding as the crimefighter, even being able to get beyond the stretching of our disbelief that is his gruff and tough Batman voice. (Seriously, wouldn't the scrunchy lips and wolf's teeth be enough to give him away?) He also gives us a Bruce Wayne that we can believe would be able to step off a helicopter with three supermodels. It's just that once he puts on the mask, he is an icon and not a personality, and though the script by Nolan, his brother Jonathan, and story contributor David S. Goyer makes some excellent points about the nature of the character and the enormity of his sacrifice, Batman will always be what he is and nothing more.

Not so for the bad guys. They have the freedom to roam, to be anything that pops into their heads, which itself is another theme of the movie: Batman lives by rules, his nemeses do not. While Ledger is rightfully getting a heap of attention, Aaron Eckhart should also be getting Oscar buzz for his transformation from straight-up good guy to the ultimate embodiment of moral ambiguity. As his Harvey Dent character progresses, he must bend what had prior to this been an unbendable moral code, and in the end, Dent is the perfect example of the strange psychology of the Bat world. He is a handful of personality tics exaggerated to their most illogical, and yet Eckhart can make them seem totally logical.

At two-and-a-half hours, The Dark Knight moves at a brisk pace. The action is nail-biting in its execution, and it's particularly worth seeking out an IMAX screen to see the twenty-three minutes Nolan shot in the format's full aspect ratio. For all the complaints that usually accompany a comic-book film with more than one villain, The Dark Knight tidily sets all of that aside and shows you can effectively deal with a more complex cast without having to lose the focus of the plot. Though at times the film may meander during some of its dialogue sequences, the overall narrative is brilliantly paced and intelligently organized. Any filmmaker can get us to point C by making both it and point B predictable via a blatantly obvious point A; it's another thing entirely to lead the viewers through each stage without making us aware we are being led. Even better, Christopher Nolan is an expert about distracting our attention in such a way that makes us slap our heads in disbelief that we mistook his manipulation for transparency. Every roller coaster asks its riders to pretend they don't know what's over the next hill even when they really do; The Dark Knight is the roller coaster of the season.

There are very few "sure things" in life. Harvey Dent will be the first to tell you that you have a 50% chance of anything either sucking or being a splendiferous adventure. He'll also tell you to make your own luck, and Christopher Nolan and his crew clearly took no chances when it came to making The Dark Knight as pleasurable a summer blockbuster as it could possibly be. A crowd pleaser that never panders, it's the kind of movie that will inspire awe, laughter, screams, and applause in equal measure. It's dark, violent, provocative, exhilarating, and even funny. No matter how accurate or deserved it may be, ignore the praise, just go and enjoy the picture. You won't be sorry.