One Flew Over the Cuckoo's Nest

Warner Bros. // R // July 15, 2008
List Price: $34.99 [Buy now and save at Amazon]
Review by Stuart Galbraith IV | posted July 20, 2008 | E-mail the Author
One of the great films of the 1970s, One Flew Over the Cuckoo's Nest was also one of the last movies of the Easy Riders, Raging Bulls era of American Cinema, before the success of films like Jaws and Star Wars gave rise to a blockbuster mentality that's all but ruined mainstream Hollywood moviemaking. Looking at it now, more than three decades after it was made, the film is still awfully impressive: it remains funny, tragic, appalling, shocking. I suspect people seeing it for the first time in 2008 respond quite differently than those who first saw it when it was new, that the familiarity with its cast of future stars in some ways works against the film today.

Originally a United Artists release, Warner's Blu-ray of One Flew Over the Cuckoo's Nest gets high marks; the film looks about as good as it ever will, and while the extras are carryovers from earlier laserdisc and DVD incarnations, these too are excellent. 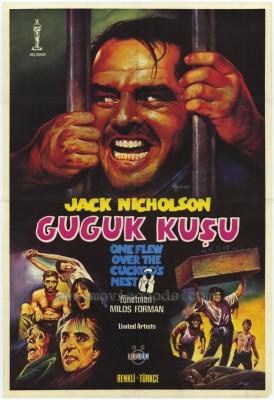 'Night of the Living Cuckoos?' Strange foreign poster from One Flew Over the Cuckoo's Nest. Funny, I don't remember Christopher Lee appearing in the film.

Convicted felon Randall "R.P." McMurphy (Jack Nicholson), naively believing he'd be better off serving the remainder of his sentence at a state mental hospital than on work detail in the slammer, convinces his jailers that he's mentally ill and is shipped off to Dr. Spivey (real-life doctor Dean R. Brooks) for extended observation. Spivey thinks McMurphy is faking, but places him in a ward supervised by Nurse Ratched (Louise Fletcher).

The other patients on the ward are passive and complacent, developmentally stagnated into a purgatorial-type existence through an overuse of psychotherapeutic drugs and Nurse Ratched's subtly condescending domination.

McMurphy's arrival and his attempts to motivate his bunkmates into asserting themselves a little rocks the boat, threatening Nurse Ratched's control of the ward. No matter that McMurphy's crude, uneducated prodding might actually be helping some of the patients, Nurse Ratched's authority is for the first time being challenged, and the film becomes a battle of the wills between defiant patient and ruinous caregiver.

Ken Kesey's novel was first optioned by Kirk Douglas, who turned it into a Broadway play that was unsuccessful, despite the material and its great cast. Douglas, obviously, was drawn to its "little man vs. The System" qualities that often appealed to the actor-producer. Kirk's son Michael eventually produced the film version, which was directed by Milos Forman. Forman's parents died at Auschwitz and he spent his early years in Communist Czechoslovakia. He saw Cuckoo's Nest as a parable about a totalitarianism with which he was intimately acquainted, with McMurphy an incendiary force igniting a passive, defeated populace into action. (Oddly, some people misinterpret the film's set-up. The point is McMurphy isn't crazy; he knows it, Spivey pretty much knows it and, maybe, so does Nurse Ratched. Equally important is that at the start of the film McMurphy isn't committed; he's essentially "breaking in.")

Whatever the interpretation of the material, One Flew Over the Cuckoo's Nest struck a raw nerve with 1975-76 audiences; they had never seen anything like it. Indeed, except for Frederick Wiseman's banned-at-the-time Titicut Foliies (1967), there wasn't anything like it.

It's important to remember that in 1975 Jack Nicholson was the only recognizable "name" in the picture, and his prestige as an actor hadn't yet been eclipsed by his familiarity as the perpetually grinning, sunglasses-wearing Hollywood celebrity. At the time, audiences knew him almost exclusively as the everyman star of movies like Five Easy Pieces and The Last Detail, not as the front-row spectator at all the Lakers' games who played The Joker in Batman. The rest of the cast were unknowns, young actors making their first film appearances or, like William Redfield (as sexually frustrated patient Dale Harding), busy but largely anonymous character players. Many in the cast would become major character stars: Danny DeVito, Christopher Lloyd, Will Sampson, Scatman Crothers. Back then, however, no one knew who these people were, and the combination of Bo Goldman's screenplay, Forman's direction, and the superb acting by all made these people and their environment seem absolutely, starkly real and authentic.*

The film was shot in a real wing at the real Oregon State Mental Hospital in Salem, and the unusual production methodology detailed in the disc's audio commentary and documentary added enormously to its verisimilitude. Further, the addition of non-actors like Brooks and some improvised lines and bits of business only added to its authentic air. Indeed, many who saw the film when it was new assumed many in the cast weren't actors but real patients recruited for the film. Some even believe Nicholson's dedication extended all the way to experiencing real electroshock therapy, which seems doubtful.

Can audiences watching the film today experience the same devastation of those final scenes, or does their familiarity with DeVito, Christopher Lloyd, etc., distance younger viewers from what was once immediate and genuinely raw? One thing's for sure, were it made today One Flew Over the Cuckoo's Nest would be a very different film indeed. Besides the inevitable parade of '60s pop tunes that would replace the music heard on the ward's record player, the marvelous ambiguity of so much of the film would almost certainly be extinguished. Forman, for instance, calls Nurse Ratched "an instrument of evil" who thinks she's really helping her patients, but does she perhaps become aware of her own evil briefly, in her sadism toward Billy? In the conference with Spivey and the other doctors, is her assertiveness in wanting to keep McMurphy under her care truly motivated by caring selflessness or conscious cruelty?

One Flew Over the Cuckoo's Nest was shot open-matte for 1.85:1 projection. The 1.78:1 widescreen, 1080p transfer is by far the best this film has ever looked. Even in 35mm screenings the picture tended to look grainy with unstable desaturated color, dirt and other signs of wear. Here Warner Home Video strikes just the right balance between cleaning the film up to a near-flawless state without overdoing the DNR. The film is 33 years old yet basically looks brand-new - but, importantly, it still looks like film, not something from Pixar generated or over-manipulated on a computer.

The film was an ordinary mono release originally, and the Dolby Digital 5.1 mix done here is as impressive in its own way as the picture quality. Jack Nitzsche's unusual, haunting score has been given the full stereo treatment, and it adds to the film's effectiveness. The dialogue and effects tracks appear largely untouched. Mono tracks in French, Spanish (Castilian and Latin), German, and Italian are included, as well as optional subtitles in all of those languages plus English, Danish, Dutch, Finnish, Japanese, Korean, Norwegian, Portuguese, and Swedish. 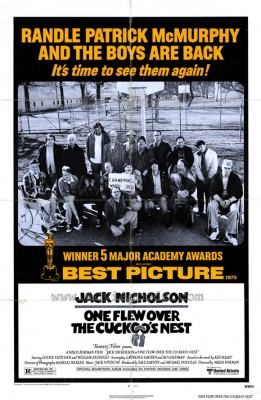 The first thing one notices about this title is that the packaging resembles a hardbound book. The disc is located on the inside "back cover," and the book itself is full-color and runs about 36 pages. Unfortunately, what's there is awfully superficial, basically incomplete IMDb-style profiles of the actors and key behind-the-scenes talent, trivia about the film, etc. Something a little more substantial would have been preferred, say a bunch of Criterion-style essays examining the film, or maybe some comments by Forman or Goldman, or perhaps contemporary reviews of the film.

The centerpiece of it all is The Making of 'One Flew Over the Cuckoo's Nest', an excellent 47-minute 4:3 documentary in standard definition from 2002, apparently reedited from an 87-minute documentary called Completely Cuckoo originally put together for the 1997 laserdisc version. I haven't seen the long version but what's here is rare among home video supplements, meeting this reviewer's criteria for such things: 1) the movie warrants the extra attention; 2) the process of bringing the film to the screen is unusual and interesting (and, in this case, quite unique); and 3) it's frank and honest, not a Big Studio snow job. Milos Forman, Michael and Kirk Douglas, Bo Goldman, Saul Zaentz, Louise Fletcher, Christopher Lloyd, Danny DeVito, Dr. Dean R. Brooks, assistant director Irby Smith, and Mel Lambert (the harbor master in the film) are interviewed, while William Redfield, Sydney Lassick and, briefly, Rhea Perlman appear in black and white video shot on location at the Oregon State Mental Hospital. Of course, Nicholson's absence is unfortunate, and there are strange omissions, at least in this short version, such as the fact that no one talks about how Redfield was dying of leukemia when this was made (a condition reportedly diagnosed by Brooks, no less), and not once is actor Brad Dourif (as stuttering Billy Bibbit) even mentioned.

Forman, Zaentz, and Douglas further expand upon their comments in the unusually good audio commentary track. Like the documentary it's not a fluff job, instead going into consider detail about the creative process.

Eight deleted scenes (all SD) are included, and again quite unlike most such things routinely tacked onto DVD and Blu-ray releases, this is material actually worth watching. For those intimately familiar with the picture, it's strange to suddenly see almost 20 minutes worth of new material featuring all these familiar actors circa 1975. Forman was right to cut everything, but there are interesting little flashes of business that flesh out the characters a bit more and it's all quite fascinating.

Finally, a disappointing 4:3 trailer is included, begging the question why Warner Home Video didn't put a bit more effort in this department; most of the extras are terrific, but except for the booklet nothing is new, either. The Blu-ray format would seem to cry out for all manner of new supplements the disc's extra storage space and high-def image would facilitate: a high-res photo gallery, a new transfer of the trailer (there were probably several different ones at that), etc.

Though not clearly stated on the packaging, it appears that all the special features are subtitled in the same languages and menu screens are offered in all these languages as well. My Japanese Blu-ray recorder defaulted to a Japanese language menu, which included optional Japanese subtitles for the audio commentary track.

One Flew Over the Cuckoo's Nest is a great film time has been kind to except in our own over-familiarity with its cast. The Blu-ray and its extras are generally excellent, though the supplements offer nothing new. If you already have the special edition DVD it's a borderline call, but if you haven't bought the film up to now this definitely is the version to get. A DVD Talk Collector's Series title.