Paramount // R // July 29, 2008
List Price: $29.99 [Buy now and save at Amazon]
Review by Stuart Galbraith IV | posted July 23, 2008 | E-mail the Author
No good deed goes unpunished. That's the premise of Patriot Games (1992), the second of four Jack Ryan espionage thrillers to date, and the first of two to star Harrison Ford, following Alec Baldwin's film debut of the character in 1990's The Hunt for Red October. Patriot Games is significantly altered from Tom Clancy's novel, though on its own terms is reasonably adult and intelligent, despite one climax too many, a view of Irish-Catholic and British politics that's both muddled and simplistic at the same time, and occasional lapses into the unbelievable.

Paramount's Blu-ray disc is, sorry to report, a major disappointment. Filmed in Panavision with a lot of shallow- and rack focus cinematography, Paramount Home Entertainment second-guessed consumer demands on the format by way over-processing the film with DNR. A high-definition theatrical trailer, also included as an extra, makes an interesting comparison. While the trailer looks much like the film did in theaters back in 1992, the same shots in the feature are like watching the movie through a fine screen door. (Compare the shot of the dead terrorist at 9:55 with the same shot in the trailer. The shot in the trailer is vastly superior. It should be the other way around.) It isn't noticeable on every shot, but when it does appear, such as over the Paramount logo itself, the effect is highly distracting and unnatural. 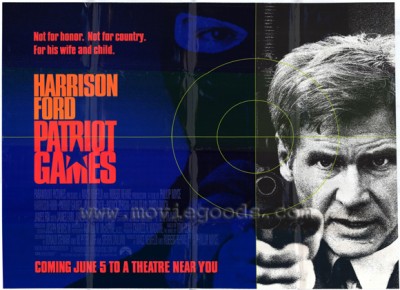 Innocently vacationing in London with his family, retired CIA agent Jack Ryan (Harrison Ford) finds himself smack-dab in the middle of terrorist attack by Irish extremists against William Holmes (James Fox), the British Secretary of State for Northern Island and cousin to the Queen Mother. (In the novel, Ryan saves no less than the Prince and Princess of Wales and their newborn son.) During the attack Sean Miller (Sean Bean) is wounded and his younger brother is shot dead by Ryan.

Ryan himself is injured, but after testifying at the Old Bailey and awarded the Knight Commander of the Victorian Order, Sir Jack and his doctor wife, Caroline (Anne Archer) and daughter, Sally (a nine-year-old Thora Birch), return home to Maryland where Ryan now works as a teacher at the Naval Academy.

Fellow radical Kevin O'Donnell (Patrick Bergin) breaks Sean out of jail during a prisoner transfer, and after Sean unsuccessfully tries to murder Caroline and Sally the two Irishmen along with other members of their Ulster Liberation Army - a breakaway group from the IRA - head for Africa, apparently Libya, to a terrorist training camp. Meanwhile Ryan, now aware that Sean will seek revenge for his brother's death until he's either killed or recaptured, rejoins the CIA in an effort to quash the terrorist organization.

Admirably restrained and for the most part intelligent, Patriot Games is a fairly good thriller somewhat undermined by typical blood-and-thunder multiple climaxes that strain all credibility, a lack of characterizations (or badly conceived ones), and for convenience's sake a dumbing-down of the political complexities of Britain, the IRA, Sinn Féin, etc., and their relation to one another and to America.

Directed by Phillip Noyce from a screenplay by W. Peter Iliff and Donald Stewart, Patriot Games has several fine action-suspense set pieces, notably the attack by the ULA on the police ambulance transporting Sean; the freeway assault by Sean on Caroline's car, and the preposterous but exciting raid by the ULA on the Ryan's home at the end. There's also some interesting business about the CIA's surveillance capabilities, in scenes highly-praised at the time and still impressive today showing spy satellites offering bird's-eye-views of the training camps in North Africa. Later on there's an eerily-staged attack on the camp by U.S. forces, seen entirely via infrared satellite cameras in the CIA's command center. It's a highly effective scene; some of the agents treat it almost like a video game but Ryan is rather horrified that his actions and investigations have led to this take-no-prisoners raid.

Other aspects of the film work less well. At about the 40-minute mark one of these hit me: as a character in this film, Jack Ryan is like a hole in the screen. The entire story revolves around his character and yet he's a colossal blank. There are a couple of clumsy attempts at characterization: asked by a colleague (Samuel L. Jackson) what went through his mind during the attack on Holmes' motorcade, Ryan admits he "felt rage." Later Ryan's superior, Admiral James Greer (James Earl Jones) asks Ryan "Tell me one thing in life that is absolutely for certain." to which Ryan answers, "My daughter's love." Well, yes. Fine. But that doesn't stretch out the character very far.

The film also leans heavily on one of the more annoying cliches of this type of film: the crazy bad guy so consumed with a need to kill the hero that he inadvertently completely sabotages the efforts of all the earnest bad guys, even killing a whole bunch of them, so mad is his obsession.

The cast is quite good. Besides those previously mentioned, Richard Harris has a couple of good scenes as an IRA spokesman, and Hugh Fraser, Captain Hastings from the long-running Poirot series, has a surprising role as Fox's assistant.

One curious note: James Horner's score is peculiarly derivative; perhaps he replaced someone else's work and had to come up with something in a hurry. Much of it sounds an awful lot like Aram Khachaturian (Adagio from his "Gayane" Suite); the real thing was heard in 2001: A Space Odyssey during the long flight to Jupiter.

Alas, a big disappointment (see above). Unfortunately, a good portion of this 1080p transfer looks like it's being projected through cheesecloth. As my pal DVD Savant wrote in his column recently concerning Dirty Harry, home video divisions seem to think every corner of every frame in a Blu-ray transfer needs to look like a freshly waxed Porsche, even when that's not the filmmakers' intention. The fact is the film deliberately keeps some of the action out-of-focus in order to direct our eyes to other areas of the frame. Over-processing, in trying to make everything look super-scrubbed, only makes backgrounds look artificial and unreal. I really hope we don't see too many more titles like this one.

The audio is more successful. Originally a standard Dolby Stereo release, it has been remixed here to (English) 5.1 Dolby TrueHD and the results are moderately impressive, though the original sound editing is a little bit dated by contemporary standards. 5.1 Dolby Digital tracks are offered in French and Spanish, along with optional subtitles in all those languages plus Portuguese.

Included is a slick trailer, also in full 1080p high-definition, along with an older but fairly extensive 25-minute retrospective featurette from 2002 in standard-def, Patriot Games Up Close.

Patriot Games is a pretty good thriller, though not exceptional. The Blu-ray disc, on the other hand, is a major disappointment. The over-processing may not bother some; others will go bonkers. To some degree it's a matter of taste and tolerance, but you'll definitely want to Rent It first.