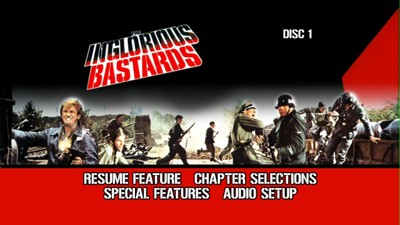 There have been rumors for several years now, at least since somewhere around the release of Jackie Brown, that Quentin Tarantino's next movie would be a WWII picture and that it would be a remake of Enzo G. Castellari's 1978 B-feature The Inglorious Bastards. While apparently struggling with the screenplay, Quentin has since made three other movies, but just last week it was announced that he had sent his script out for studios to bid on. What fortuitous timing for Severin Films, whose three-disc DVD of the Castellari original is just about to hit store shelves. What better time to strike than when the name Inglorious Bastards is everywhere?

Now, before you get too excited, keep in mind that with taste as broad and enthusiasm as boundless as Tarantino's, not every flick he recommends is going to be pure gold. Inglorious Bastards is far from being a lost classic. While it would be easy to compare the movie to the war films of Sam Fuller, Castellari and his five writers have a script that lacks the heart of a Fuller picture and instead only has the rough-edged style. Still, as far as shoot-'em-up 1970s exploitation cinema is concerned, Inglorious Bastards has some definite lunk-headed entertainment value.

Set in occupied France in 1944, the film follows five shamed Allied soldiers who have been placed under arrest by the MPs for various reasons. In this crew, you have your basic collection of war-time scoundrels: Tony (Peter Hooten), the caustic rebel with all the angles; Nick (Michael Pergolani), the thief with every conceivable object you might need hidden on his person; Berle (Jackie Baseheart), the coward who is good with machines; Canfield (the Hammer himself, Fred Williamson), the kick-ass black dude; and Lt. Yeager (Bo Svenson), the smooth flyboy busted for using his plane to visit his girlfriend. When Nazi troops attack the convoy carrying these men to prison, the convicts decide to liberate themselves rather than be shot, and they make a run for the Swiss border. Along the way, they accidentally plow into an undercover mission to destroy a Nazi war machine being shipped through France by train, and so they take the place of the crack squad in order to finish the job. The resulting suicide mission sees Inglorious Bastards go into overdrive, and you'd have to be the staunchest hater of war movies not to root for the good guys to blow that German train to kingdom come. 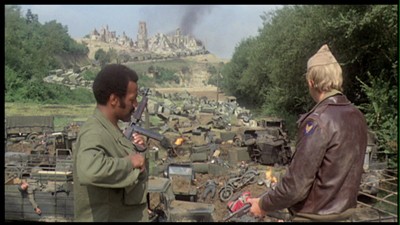 There's not much more to Inglorious Bastards than that. Any depth is dismissed as soon a Svenson breaks up a racially motivated fight between Williamson and Hooten by telling them he's not going to have any nonsense of that kind in his outfit. Leave the stinkin' thinkin' at home, boys! This is very much a what-you-see-is-what-you-get kind of picture, so much so that I don't even see much point referring to the characters by any other names than the actors who played them. As far as I'm concerned, that's Bo Svenson and Fred Williamson up there on screen, and both are damned good at being who they are. That's the whole reason we signed up with this crazy brigade anyway, isn't it?

On the soldiers' fugitive trek from prison to the train yard, they encounter all manner of battle, getting into tussles with troops from all sides, and even running across ten Nazi ladies bathing in the woods who pick up their guns to fire before even reaching for their uniforms to cover their unmentionables. An international production, the budget is spent mostly on the stunts, including some excellent work with the train at the end, and the story is just an excuse to get to them. Believe me, I'm not damning with feint praise here, I dug the movie, I just would rather call it what it is. The acting is wooden, the dialogue barely passable, and the production design inconsistent. These soldiers look like they stepped out of a 1970s bar rather than the German front lines, and since it was shot in Italy, get ready for that whacky post-production overdubbing where a lot of the spoken lines end up disconnected from the mouths that are supposed to be speaking them.

Yet, for all these flaws, The Inglorious Bastards is a pretty fun way to kill an hour and a half. Not-so-noble guys doing noble things in spite of themselves is one of those concepts that never seems to get old. If you like watching things blow up and men riddled with machine gun fire spinning through the air in slow motion while bloody squibs squirt red goo everywhere, Enzo G. Castellari has the right kind of bastards for you. 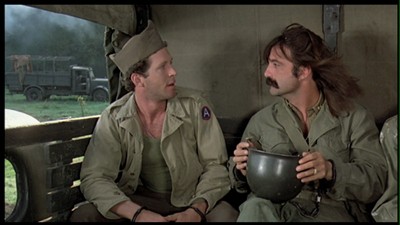 Video:
Severin has mastered The Inglorious Bastards at 1.85:1 aspect ratio, anamorphic for 16:9. The image quality is fairly good, with little by way of dirt and scratches. The grain and slightly washed-out colors looked to me like a result of the production values rather than a fault of the folks putting this disc together. For a low-budget picture like this, I'd say all due diligence was performed.

Sound:
A mono mix in Dolby sounds a little flat in the dialogue scenes, particularly in a segment in an abandoned building where the actors suddenly sound distant, but it really picks up when the action does. The explosions and machine guns all sound excellent.

There are optional English subtitles, but these are not for the entire movie, only for the parts where German or French soldiers speak in their native language. They came on automatically, but beware if you accidentally turn them off like I did, because you'll miss some of the conversations.

Extras:
This is the 3-Disc Explosive Edition of Inglorious Bastards, and so it comes with a decent clutch of extras. On DVD 1, look for an audio commentary by director Enzo G. Castellari--and I mean it, look for it. For whatever reason, this extra is not advertised on the back of the DVD box, and it's not listed in the special features section; rather, you have to go into audio options to see that it's there. The commentary is a dialogue moderated by DVD producer David Gregory, and it begins the very specific, very detailed extras that leave no production stone unturned. 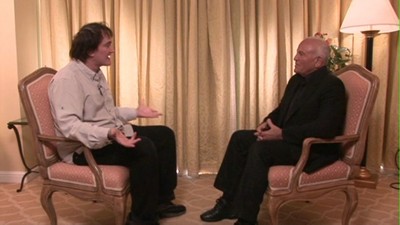 The two video bonuses on DVD 1 are a short theatrical trailer for the movie and a new sitdown between Castellari and Tarantino. The conversation lasts 38 minutes and has some interesting discussion of filmmaking, but your enjoyment will depend on how much you enjoy listening to Tarantino talk (I like his movies, but as an orator, he bugs me, personally). At times, you'd be forgiven for thinking this is a conversation meant to promote Q.T., as Castellari is a gracious conversationalist and let's his admirer run wild with self-admiration at times. Still, the talk of craft is worth it.

DVD 2 has two major featurettes. The shorter is the 13-minute Back to the War Zone, in which Castellari tours some of the locations where they shot Inglorious Bastards, comparing them then to now.

The longer documentary, 1 hour and 15 minutes, is Train Kept-A-Rollin', an exhaustive collection of interviews covering every aspect of production. Featured in new on-camera talks are Castellari, Svenson, Williamson, effects man Gino De Rossi, producer Robert Sbarigia, screenwriter Laura Toscana, actor Massimo Vanni, and Filipo De Masi, son of composer Francesco De Masi. Topics covered include foreign actors working in Rome, real stuntwork, budget problems, and the creative use of special effects and matte shots, including having to come up with a solution after the government confiscated all of their gun replicas. Though there is no on-set footage, there are photographs, including great shots of some of the model trains, and a short storyboard-to-film comparison for the climactic explosion.

Both documentaries are primarily in Italian with subtitles, with only Svenson and Williamson speaking in English. 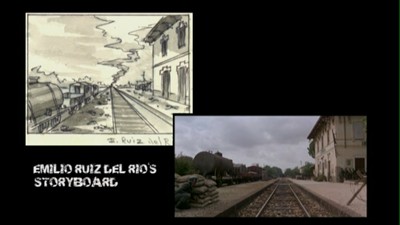 The third disc in the set is actually a soundtrack CD with the "only surviving original music": four tracks composed by Francesco De Masi and clocking in at just over 18 minutes. De Masi's son explains the reason for the missing recordings in the main documentary on DVD 2.

FINAL THOUGHTS:
Recommended. Though the cultish reputation Enzo G. Castellari's The Inglorious Bastards has picked up over the years is a wee bit exaggerated, the film is still an entertaining Italian war picture featuring two truly '70s action stars, Bo Svenson and Fred Williamson. As the leaders of a band of criminal misfits redeeming themselves in occupied France, these two kick, shoot, and tumble their way toward the Swiss border with a gung-ho attitude to match the best of them. The movie is exactly what it aspires to be, and there is no shame in that. This 3-Disc Explosive Edition adds informative extras and a CD of soundtrack music to make the package a cut above, even if the film is not. It'll be interesting to see what Quentin Tarantino does with the flick when he remakes it. 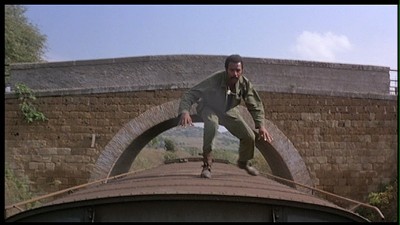