Brand Upon the Brain! - Criterion Collection 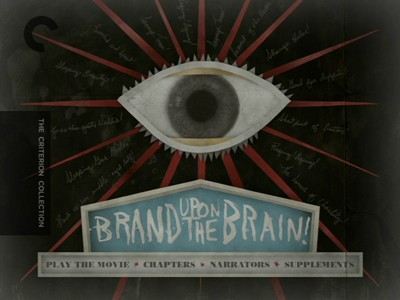 Guy Maddin's distinctive, stylized riffs on antiquated film processes are an acquired taste that I was unable to fully acquire in my earlier samplings of his work. I found his films to be more interesting ideologically than they were as viewing. His style of stressing his film and shooting through edge-warping irises felt to me like pretentious shortcuts rather than legitimate tools of his craft, the flashy pictures put out in front of empty stories to keep us from noticing the man behind the curtain had no clothes. (Such mixed metaphors would not be out of place in Maddin's Cuisinart world, either.) This has all changed now that I've seen Brand Upon the Brain!, newly released by Criterion.

Whether Brand Upon the Brain! is merely the entry point I have been waiting for to grant me access to the Guy Maddin aesthetic or whether it's the long-awaited blossoming of a filmmaker struggling to establish his own style is something I cannot address until I eventually backtrack and pick up the pieces I missed. Regardless, it definitely appears to be a career high, an artistic effort where the artist has found the vehicle he has always longed for and the perfect means by which to execute it. Shot like a silent film, Brand Upon the Brain! is an exercise in pseudo-autobiography, its fractured editing style meant to reflect the fractured memory that is emerging from Maddin's subconscious. Broken into twelve chapters (plus one interlude) and featuring intertitles that appear in choppy fragments, Brand Upon the Brain! plays like it's being beamed in from a distant communications tower, the signal stretched thin, only being picked up in pieces. It's both disjointed and totally linear, like a dream. Or a tale recounted by a sporadic amnesiac.

The story begins with Guy Maddin (played by Erik Steffen Maahs) returning to the island of his childhood, sent on an errand by his long-estranged Mother to fix the place up in anticipation of her return. The Maddin family lived in a lighthouse that also served as an orphanage where young Guy (Sullivan Brown) and his Sis (Maya Lawson) grew up with the children in their Mother's care while their Father (Todd Jefferson Moore) conducted strange experiments in his lab. Once there, Guy begins to paint the lighthouse white, as if whitewashing his own troubled past, and with each brushstroke, he falls deeper into memory until the audience becomes privy to everything that happened there. 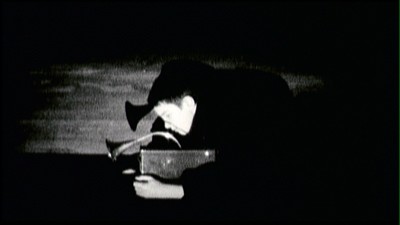 Maddin is clearly an unreliable narrator of his own life, sprucing up his remembrances by refracting them through a prism of old movies and a bygone pop culture of child detectives and Hal Roach comedies. As artistic reference points, one can spot Peter Pan's lost boys, classic Hollywood horror movies, and European erotica. The Maddin island is eventually invaded by the Lighthouse Kids, a world famous investigative brother and sister team that suspects foul play in the unexplained deaths of several orphans from the island. Each child was found with a mysterious mark on the back of his or her head, like someone was burrowing into their brain. Except, even the Lighthouse Kids are not what they seem, as only one of them (played by Katherine E. Scharhon) has come to the island. First she appears in her true guise as Wendy, whom Guy becomes smitten with, but then Wendy dresses up as her brother Chance and begins to have an affair with Sis. Guy is still attracted to Chance/Wendy, but he doesn't know why.

There is much that Guy doesn't understand about the island beyond his budding sexuality. Much of the thematic thrust of Brand Upon the Brain! is uncovering how the child became aware of awful truths. Throughout the film, Guy often faints, unable to process everything he is witnessing, like a victim of abuse blocking out that which is too painful to remember. Metaphorically, we are seeing a mad scientist father who ignores all else in pursuit of his work, a rebellious sister, and a mother who envies the youth she sees in her daughter and yearns to take it from her. Mother is played by four actresses, all representing different ages--Gretchen Krich as the properly aged woman, Clara Grace Svenson and Cathleen O'Malley as de-aged incarnations, and Susan Corzatte as the "present" day older woman. In the horror/sci-fi tropes, Mother and Father are quite literally feeding on these children, and there are also signs of incest, of Mother molesting the young Guy and maybe even Sis. Likewise, Mother does not approve of her children embracing sexuality beyond her, and part of the grown-up Guy's growth in the modern day framing sequence is dealing with what that sexuality may be. The "brand" upon the brain is not just referring to the leaching holes, but the psychological damage left by one's upbringing.

Amidst this swirling narrative--told through voiceover and music, as well as the silent-film intertitles (see below)--Maddin creates a deliriously creative world. Father cooks up many amazing gadgets in his lab, including bizarre, almost steampunk-style communicators that carry distorted messages between the family members, including haunting instructions from times past. The top of the lighthouse is like the bridge of the spaceship in a 1950s B-grade sci-fi picture, and Mother watches from on-high like a Disney villainess, her guidance leading her children astray rather than bringing them safely home. Maddin and director of photography Benjamin Kasulke use black-and-white for all of its nostalgic purposes, to invoke the happy and the sad, the good ol' days and the not-so-good today.

Brand Upon the Brain! is demented and demanding, but as an expression of one man trying to uncover the imprint of past experience on his psyche, it's positively exhilarating. 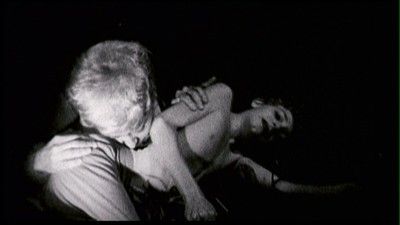 Sound:
Viewers of Brand Upon the Brain! have a choice of seven different stereo soundtracks to choose from. Three of these are studio recordings, and four of them are live recordings captured during the national tour Guy Maddin took the film on, performing the audio live with an orchestra, Foley artists, a castrato, and using different narrators in different cities. The choice you make will mainly change the narrator, though there are some noticeable differences in the soundtrack with the live performances, most obviously in a different quality to the Foley sound effects and the replacement of the prerecorded boys choir with the solo castrato (the songs are in chapters 11 and 13 on the DVD and worth toggling over to hear the live singing). The possible narrators are Louis Negin (a regular Maddin collaborator and the actor who played Truman Capote in 54) and Guy Maddin himself in the studio; professional weirdo Crispin Glover, poet John Ashbery, musician and performance artist Laurie Anderson, and legendary actor Eli Wallach live; and showing up twice, the traditional and preferred narrator, Isabella Rossellini, doing double duty in the studio and in the live arena.

If I had to choose, I'd choose one of the female narrators over the males, as the gender switch not only fits some of the thematic concerns of Brand Upon the Brain!, but it also creates an interesting disconnect, particularly in the first-person passages. I changed the narrator with each chapter break when I watched the movie, and it made for a rather fascinating experience. Of all the tracks, the only one I didn't really care for was John Ashbery's, whose speaking style was too stilted and distracting, not fitting with the flow of the film itself.

Subtitles for the deaf and hearing impaired are also available. 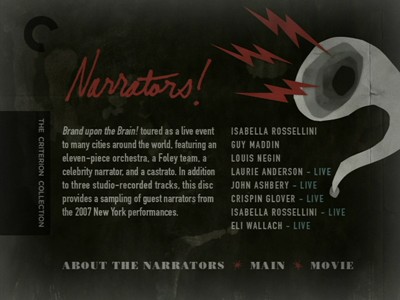 Extras:
As with all Criterion discs, Brand Upon the Brain! comes with a supplemental booklet. 14 pages in length, it features design imagery, cast and crew credits, and a new essay examining the work of Guy Maddin, written by film critic Dennis Lim. The DVD is packaged in a clear plastic case and the outer cover is printed on both sides. A chapter listing for the disc is on the inside front cover.

In addition to the sound options, there are multiple bonus features on the DVD itself, including a theatrical trailer and one deleted scene. The deleted scene runs approximately six minutes and it details a climactic showdown between Sis and the character Savage Tom (Andrew Loviska), her very masculine teenage counterpart.

97 Percent True is a new 50-minute documentary examining the unique production. It charts the evolution of Maddin's art and what has influenced him before transitioning into the unique nature of how this film came about, including a rushed development and shooting process, the post-production period, and decoding some of the autobiographical aspects of the movie. Of interest are the color photographs and behind-the-scenes footage of the Brand sets, as well as other narrators from the tour, like Udo Kier and Daniel Handler (a.k.a. Lemony Snicket). Interviewed for the movie are Maddin, Kasulke, co-writer George Toles, editor John Gurdebeke, and composer Jason Staczek, among others.

The last of the extras are two new short films made by Guy Maddin exclusively for this DVD and which spotlight certain members of the production team in Maddin's inimitable way. It's My Mother's Birthday Today is a surreal, five-minute portrait of Dov Houle, a.k.a. the Manitoba Meadowlark, the castrato who performed the songs on the live tour. The nine-minute Footsteps shows the Foley team at work, with some humorous embellishments.

FINAL THOUGHTS:
Highly Recommended. Even if you've been suspicious of Guy Maddin's bizarre point of view before, toss out any worry when it comes to Brand Upon the Brain! - Criterion Collection. It's a delicious malformation of an autobiography, playing with movie iconography and childhood nostalgia in order to examine the seminal experiences that indelibly changed the auteur's psyche. Shot like a silent movie, with multiple versions of the score and narrators to choose from, this crazy hybrid of melodrama, sci-fi, and horror excites more than it confounds, but even the confounding is exciting in Maddin's delirious world. Complete with new short films and a decoder-ring documentary, mark another in the win category for Criterion. 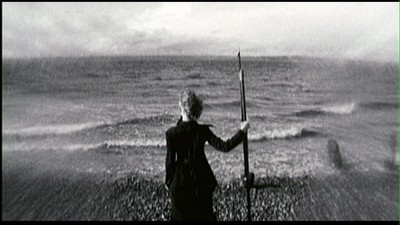